Buy the Book,Top Story American History,Book reviews,Founding Fathers Recovering the Meaning of the Founding - The American Spectator | USA News and Politics
Menu
Buy the Book
Recovering the Meaning of the Founding
From Jerusalem and Athens to Rome and Runnymede.
by G. Tracy Mehan III
Howard Chandler Christy, Scene at the Signing of the Constitution of the United States, 1940, oil on canvas (United States Capitol/Wikimedia Commons) 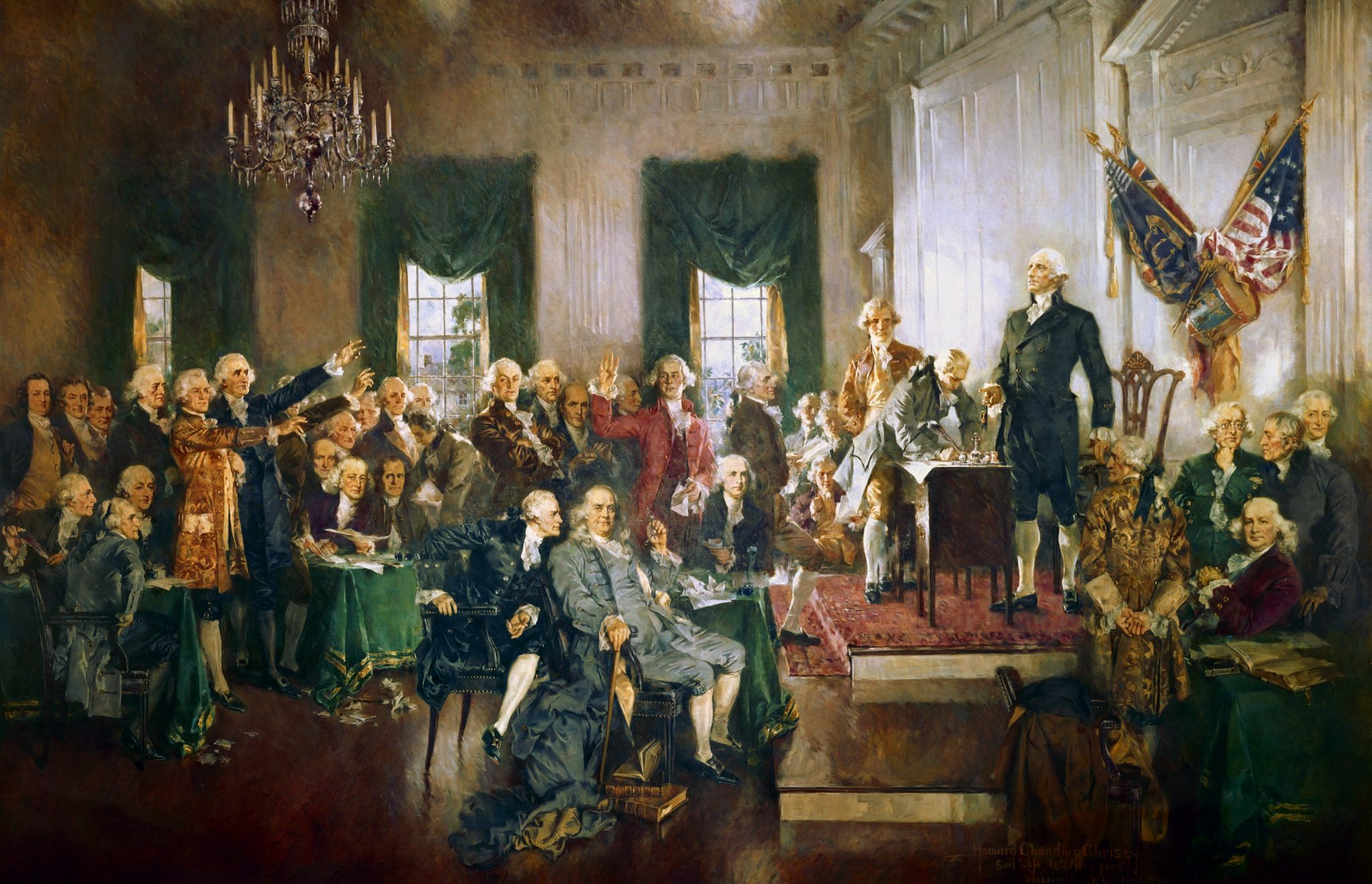 America on Trial: A Defense of the Founding

The American people have lost their common understanding of the Founding of the nation, specifically the Declaration of Independence and the Constitution. The now-routine pitched battles over Supreme Court nominees are manifestations of this reality. But phrases such as “all men are created equal” or “the pursuit of happiness” now elicit diametrically opposed interpretations from the citizenry. Is equality that of opportunity or outcome? And is happiness simply self-gratification or the practice of virtue and self-sacrifice?

Some progressives now characterize the Founding as inherently racist.

Robert R. Reilly takes on all who would denigrate the American Founding in his penetrating, erudite new book, America on Trial: A Defense of the Founding.

The New York Times‘ 1619 Project argues that the American Revolution was an effort to protect slavery rather than a movement that led, ultimately, to its abolition. Many on the left see little benefit in limited government, separation of powers, or federalism if it obstructs their economic and social agenda. Court-packing is the latest rage along with deep-sixing the filibuster.

Incredibly, some Catholic intellectuals, such as Notre Dame’s Patrick Deneen and Michael Hanby of the John Paul II Institute, now castigate the Founding as containing within it a poison pill of radical individualism and moral relativism derived from a toxic mix of Locke, Hobbes, and the Enlightenment bringing the nation to its present state of decay, as evidenced by the prevalence of pornography, family breakdown, abortion-on-demand, same-sex marriage, and, most recently, transgenderism. Their cultural critique is accurate in describing the current era of therapeutic self-actualization, but is it correct in describing John Adams, Thomas Jefferson, Alexander Hamilton, and the many signers of the Declaration as the cause of our current state of affairs?

Robert R. Reilly takes on all who would denigrate the American Founding in his penetrating, erudite new book, America on Trial: A Defense of the Founding, which explores, in detail, the “genealogy of ideas” undergirding the thought and action of the Founders.

Long before Locke, Hobbes, and Diderot, there were Aristotle, Cicero, and Aquinas. They, in turn, were followed by Richard Hooker and Algernon Sidney. All of these philosophers are now nearly forgotten and ignored in American universities and unknown to our politicians. They constituted the intellectual DNA of the Founders. These thinkers, not the philosophes of the French Enlightenment, were the common patrimony of the signers of the Declaration of Independence, and they taught that there was a natural law written in the hearts of human beings and the world, and this law was intelligible to the intellect.

Reilly’s impressive book comes out on the 60th anniversary of the classic We Hold These Truths: Catholic Reflections on the American Proposition (1960) by John Courtney Murray, S.J., another natural law justification of the American Republic. Reilly, building on Murray, takes the reader much deeper in terms of the philosophical and theological depths of the Founders’ intellectual foundations.

The scope and ambition of America on Trial is described by Reilly in the following passage:

The aim is to provide the reader with glimpses into the essentials that derive respectively from Athens, Jerusalem, and Rome. From Athens: the existence of universal truth, a rational universe ordered by a divine intellect, the primacy of reason in man’s moral life, the existence and immutability of human nature, and the existence and immortality of the human soul. From Jerusalem: monotheism, creation ex nihilo, the fundamental goodness and reliability of creation, man made in the imago Dei (image of God), and salvation history. Finally, from Rome (Christianity): the universalization of the truths of Judaism stated above, the Incarnation and the culmination of salvation history in Christ, the dedivinization of the world (the final end of pantheism), the separation of the sacred from the secular, and the recognition of the inviolability of the individual person.

Throw in the medieval debates over nominalism and voluntarism, the investiture conflict, the Magna Carta (Runnymede), and the battle against the Divine Right of Kings, and you get a taste of some, but not all, of the feast Robert Reilly lays out for the inquiring reader.

Reading America on Trial does induce some melancholy as to what has been obscured if not lost in our academic and political cultures: the richness of an intellectual and religious tradition without which Western values and the United States itself could not exist. That virtue is now seemingly untethered from the modern sense of freedom is just one aspect of this loss to American society.

“The key, as the Founding Fathers knew, is virtue. This theme is repeated again and again throughout the Founding era by both its leaders and clergyman,” Reilly writes. “They taught that freedom is not divorced from nature; it is rooted in and limited by nature.” Moreover, “Virtue is conformity with what is naturally good. It is not license or licentiousness, which is unnatural and unreasonable.”

“No matter how democratic their institutions, morally enervated people cannot be free,” the author argues. “And people who are enslaved to their passions inevitably become slaves to tyrants.”

Recovery of the authentic meaning of the Founding requires recalling that “the Founders predicated success of the republic on the virtue of the American people…. Without it, the republic would fail, and it is why it is failing now — not because of the Founding but despite it.”

Robert R. Reilly’s new book is a moral as well as an intellectual project of immense importance to the restoration of more robust understanding of the American Founding and the reconnection of virtue to freedom in our national character.