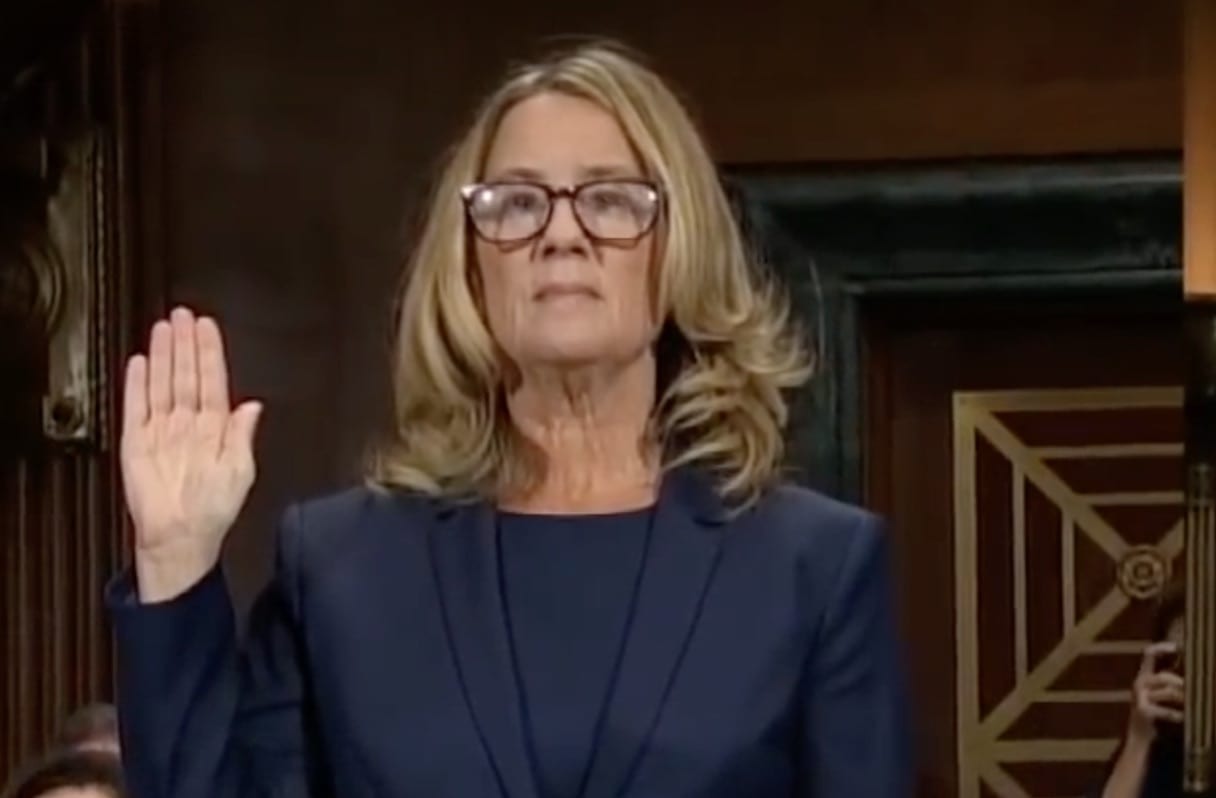 Even with Christine Blasey Ford being favored by every unwritten rule about assessing sex-related allegations, her stories fall almost completely apart under rational analysis.

According to today’s rules that are politically correct (and humane and rational, if not taken too far), the female accuser enjoys the initial benefit of the doubt, the accused male doesn’t. She is assumed to be truthful; he is assumed culpable. She must merely allege an offense; he must convince us it didn’t happen.

From his end, any “culture of drinking and promiscuity,” or state of inebriation, is not only relevant, but damning; for her, those elements are off limits for discussion, even for purposes not of assessing moral fault but just for determining her memory’s validity.

Likewise, Brett Kavanaugh’s high school yearbook is to be closely parsed for anything condemnatory; Ford’s yearbook is not to be mentioned.

Even mid-sized discrepancies in her account are excused because, well, trauma messes with memories. But every single, minor, apparent variance in his testimony — even if he himself said things a few sentences before or after that gave a fuller, accurate picture — is treated as evidence of perjury. He can be grilled to a crisp, but if she is “cross-examined” in an even remotely challenging way, it’s an abomination.

Even so, Ford’s story appears more and more like a case of mistaken timing and identity — not exactly unheard of, for someone who herself has written professional papers touting “self-hypnosis,” including “creat[ion of] artificial situations,” even though the hypnosis can cause “contamination” of memory.

To believe her experience actually involved an attack by Kavanaugh, one must believe all the following. 1) That she performed superbly, and seemed well-adjusted, for the next three years of high school but then fell apart, specifically due to the assault, in her first year of college. 2) That she would not mention it for 30 years. 3) That when she did mention it, in “couples therapy” that apparently met at her own house, behind a “second front door” installed several years earlier than the time she claimed it as cause for her marital distress, she failed to mention Kavanaugh’s name — and failed to mention it again in private therapy a year later.

And, 4) that although both her first account to her therapist and major subsequent account said the assault happened in the “mid 1980s” when she was in her “late teens,” and even though she herself crossed out “early” 1980s on the document used as the basis of her very odd polygraph test, we now should accept that it happened when she was just 15 (not late teens), in 1982. (This is important. The only time she was known to socialize with Kavanaugh’s friends was when she briefly “went out with” his classmate Chris Garrett in 1982.)

Furthermore, 5) She said her only real connection to Kavanaugh and Mark Judge was Garrett, but she says Garrett wasn’t at the gathering in question, and her friend Leland Ingham said she did not know Kavanaugh at all — so why would they have gone to an unknown house, with people barely acquainted with them, yet have it not be a gathering Ingham would remember? 6) How could Ingham, her lifelong friend, a producer of a podcast by national liberal pundit Bob Beckel (her ex-husband), be one of only two girls at a gathering of barely known, older guys, yet not remember suddenly finding herself the only girl there, with her good friend having mysteriously disappeared, at a time when the friend couldn’t even drive herself?

And, if Kavanaugh and Judge were noticeably and loudly the only ones drunk, how would it make so little an impression on Ingham that she could say, despite Kavanaugh’s high-profile life since then, that she remembers attending not a single gathering where he was present?

For Ford’s story to be accurate, we must believe 7) that P.J. Smyth also would not remember such a small gathering; 8) that all the literally hundreds of people who knew Kavanaugh well, who say they never saw him behave in anything like the manner described, can be discounted; and 9) that a plethora of other inexplicable confusions and contradictions in her account — including that she has no idea how she made it home some seven miles away — are not materially important.

As the American Psychological Association wrote in a 2011 Supreme Court brief, studies consistently show that some 33 percent of all identifications of alleged criminal perpetrators are inaccurate. It is quite possible that when a confused victim, three decades later, tries to reconcile a false ID with a timeline, she will subconsciously alter the timeline to make it comply with her memory (maybe especially if she advocates, as Ford did, “self-hypnosis”).

Ford’s high school teachers say she was outgoing and high-achieving for three years after she briefly dated Kavanaugh’s friend. But she said the attack “derailed me substantially” in ways that nearly caused her to flunk out of the University of North Carolina — three years after her revised account of when the assault happened, but, noticeably, the very school year after her original account of an assault when she was a late teen, in 1985, when she no longer was in the social circle of Kavanaugh’s friends.

Her story doesn’t hold up. But Kavanaugh’s superb professional and personal record, unsullied by 26 years of high-profile public service and six full FBI background checks, should weigh in his favor, rather than having her retain the “benefit of the doubt” that applied when this inquiry began. His own calendar, not dispositive but certainly instructive, adds substantially to his defense.

Christine Blasey Ford says Leland Ingham Keyser was at a gathering where an ostentatiously drunk Brett Kavanaugh assaulted her. Keyser says she attended no such gathering that included Kavanaugh. Ford’s own witnesses all back Kavanaugh, as does every other material fact. It’s time to express sincere concern for Ford, for whatever she suffered, but to conclude, confidently, that Brett Kavanaugh had nothing to do with it.