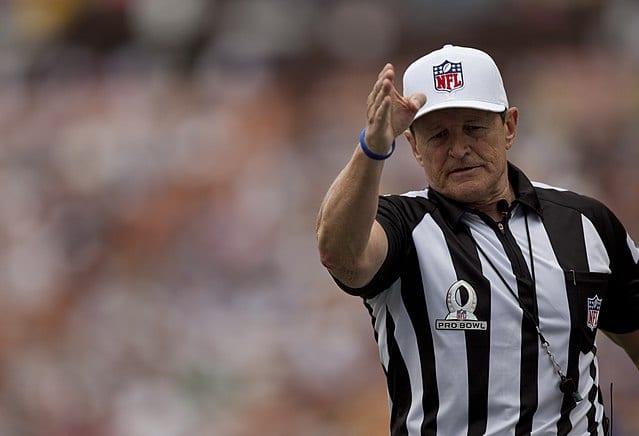 It’s not just me. My impression has been confirmed. There has been a flag-storm in the NFL this year where a record number of flags were thrown and penalties assessed over the regular season just ended. The new record is somewhere between 3,447 and 3,472 flags, depending on which report you believe.

No wonder so many NFL zebras had to be treated for exhaustion after games this fall. No reports yet of officials having to undergo Tommy John surgery from all that flag-throwing. But at this pace it’s just a matter of time.

But how to account for all this gridiron malpractice? Are current NFL players more poorly coached and less game-disciplined than previous generations of players? (They certainly have way more tattoos and worse hair — what is that small mammal on Odell Beckham’s head?) Are there more nit-picky rules in the pro game today? (The requirement that tacklers say “Mother may I?” before touching a quarterback is certainly one.) Or are current NFL officials more tight-assed and/or just looking for more on-camera time? (“Personal foul — unnecessary roughness — 15 yards — repeat first down — Hi Mom.”)

Six Flags Over Georgia is no longer just an Atlanta-area theme park. It’s also now about what the Falcons get hit with every quarter. All this flagging and penalizing makes NFL games longer and brings them closer to the sport’s long, exhaustive (and exhausting) rule book. But it certainly doesn’t make them more entertaining. “A flag on the play” has become a plague on the game.