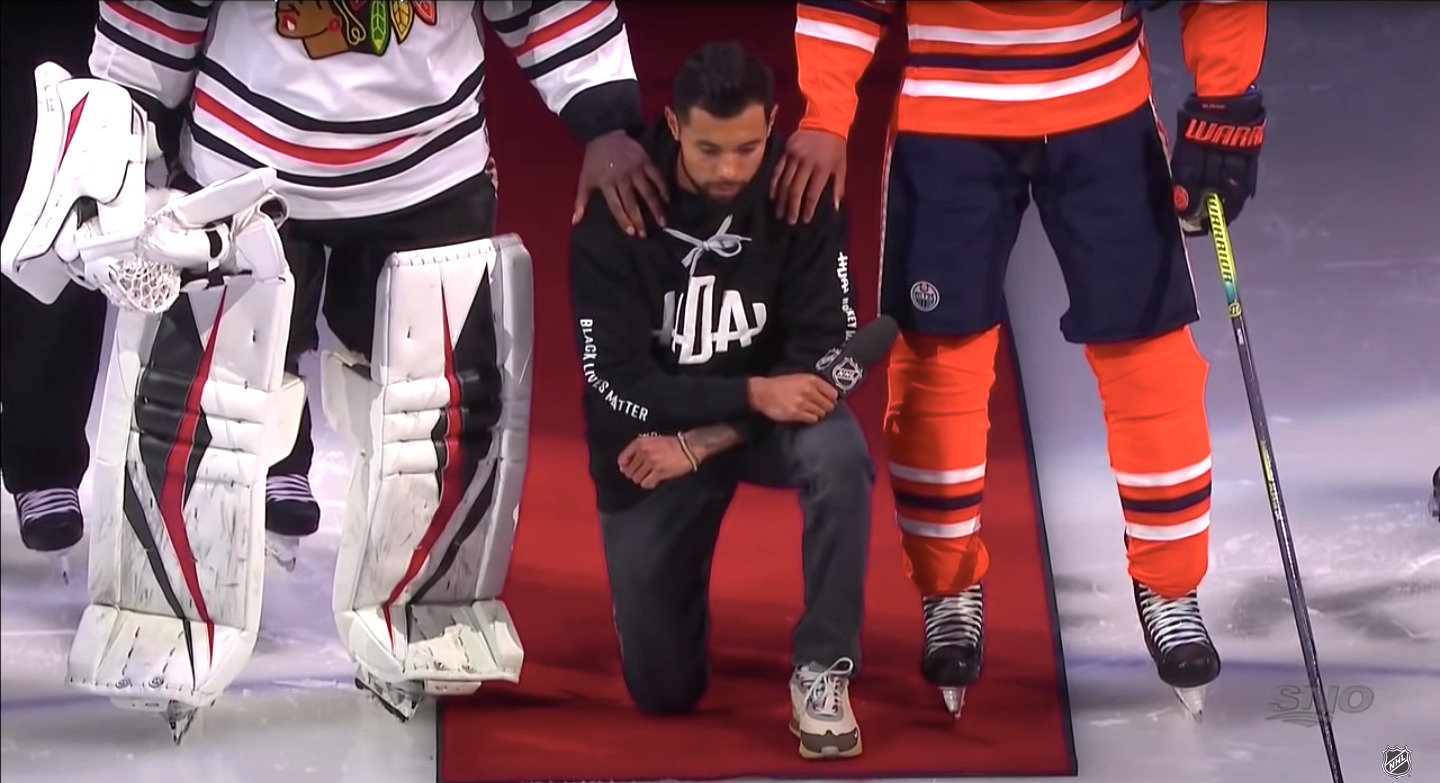 Matt Dumba (that’s his real name, by the way), a defenseman for the NHL’s Minnesota Wild, took a knee during the U.S. national anthem during Saturday’s game between the Edmonton Oilers and Chicago Blackhawks. Along with the gesture, Dumba shared his erudite musings about police brutality in a speech for the game’s television audience and wore a sweatshirt with “Black Lives Matter” emblazoned on the sleeves.

There is a particularly aggravating aspect to Dumba’s public protest against America’s national anthem: he’s not American.

Dumba was born in Regina in Saskatchewan, Canada, before moving to Calgary in Alberta, Canada, at the age of eight. Dumba is of half Filipino heritage. When he was 17, he captained Canada’s national team in the under-18 world hockey championships in a failed attempt to break the United States’ winning streak.

Yet the Filipino-Canadian received only adulation from the American media for his protest of America’s anthem, with Minnesota’s Star Tribune branding him the “face of hockey’s racial justice movement.”

Taking a knee during the U.S. national anthem has always been about proclaiming there is something fundamentally wrong with the United States. Former 49ers quarterback Colin Kaepernick, who began the protest in 2016, first explained it as a refusal “to show pride in a flag for a country that oppresses black people and people of color.”

Now, the movement has extended beyond Americans protesting their own country. Today it’s foreigners from our allied countries who preach to us that America is so fundamentally evil that its flag and anthem cannot be stood for.

Dumba, despite his Filipino ancestry, appears to have little respect for the American lives sacrificed under that same flag to rescue the Filipino people from the clutches of the Japanese during World War II. Dumba should ask those Filipino soldiers who died alongside their American allies in the Bataan Death March or the Filipino civilians liberated by Americans from the Japanese onslaught about the American flag.

Canada has been reckoning with racism and police brutality for the past few months in much the same way as the United States. Protests against police brutality in Canada have sprung up in every province, including in cities like Montreal, Vancouver, and Ottawa. Yet despite the fact that he is part of the Black Lives Matter movement, which is arguing for change in Canada just as much as in the United States, Dumba only deemed the American flag and anthem unworthy of his respect.

However, Dumba later reconsidered that judgment, and expressed regret that he had not taken a knee during the Canadian national anthem.

“I think my biggest regret is not doing it for the Canadian national anthem, as well, because there is a lot of light that needs to be shed on what is happening in Canada and the oppression First Nations people have felt for hundreds of years,” he said during a video call. “I was disappointed looking back on it because, like I said, I knew the reasons why I knelt. Just in the moment it happened like that.”

As a result, the NHL’s perfect record of standing for “O Canada” may now be in danger. What will Dumba do if he kneels during the Canadian national anthem while he belts out the lyrics “O Canada, we stand on guard for thee!”?

Dumba’s kneeling for the U.S. national anthem disrespects everything America has given him and everything it has done for its allies of Canada and the Philippines. But what else can be expected when so many Americans have lost pride in their own country and their own flag? The world will see us as inherently evil if that’s how we view ourselves.