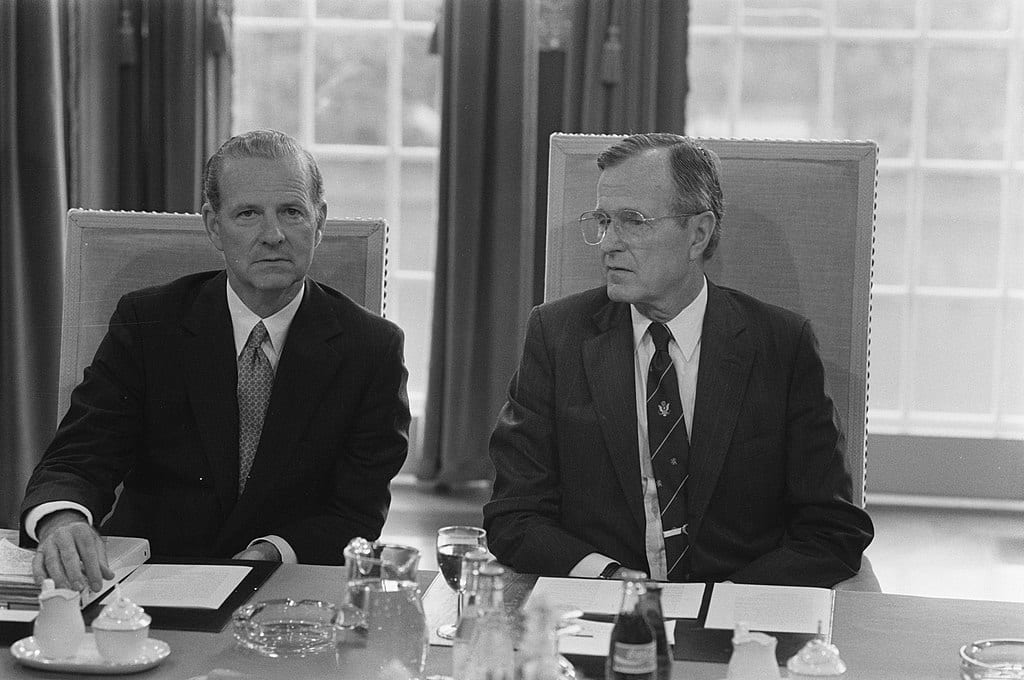 I ask myself why I am not feeling grief, pain, or even emotion at the passing of President George H.W. Bush.

I know the answer, but it is hard for me to put my feelings into words I want to publish. In my entire life, I have followed a credo that I will not speak negatively about the deceased at the time of their passing. I anticipate that I will break that credo only once in my life, when Obama someday moves on to his just-and-deserved next phase in a world where oceans do not rise. But otherwise I will not be among those who lack the basic rudimentary decency to hold their peace when a person dies.

And yet I struggle to find some words, to give voice for others who feel as I do, as every television station preempts its regular nonsensical offerings to televise the proceedings of state in the nation’s capital as we pay homage to the memory of our 41stPresident. Here is my best effort:

I do believe that Bush 41 was a man of personal decency and class. I wish to G-d that President Trump, whose policies I so strongly support, somehow could bear some of that comportment. I believe, too, that George H.W. Bush was one of the bravest, most courageous of unsung heroes, a war hero who repeatedly risked his life for a greater cause, the cause of America and freedom. How fitting that long before we all became cognizant of the media’s indulgence in “Fake News” and lying to the American people to push their liberal Democrat agenda, it was that media that described this man as a “wimp”! Newsweek ran a cover story on him: “The Wimp Factor.” This man was a war hero, and the wimps who wrote about him would have released their urine in their pants if they had confronted even one-tenth the danger that this man of courage and bravery faced and over which he triumphed gallantly. But I can never forgive him for two things: one microcosmic and one macrocosmic.

The Microcosmic: James A. Baker III and the Hate

Microcosmic — he had James A. Baker III as his Secretary of State. Baker was the worst public anti-Semite in high government office since the time of World War II. I can forgive Baker for hating Jews because that is his DNA. I cannot expect someone to overcome his DNA. But I cannot forgive Bush for allowing Baker to run roughshod over Israel and for his despicable quoted closed-door comments about Jews.

In the late 1990s, I decided to move from the highly regarded national law firm where I was practicing law to a new firm, and I had a law recruiter lining up interviews for me. I actually was in somewhat high demand. All the interviews were with similarly regarded national firms. The process typically entails six or so hours of interviews, all day long, with six to eight attorneys, one after another. At one law firm the day was going exceptionally well until a late-afternoon interview with a gentleman who had a photograph of James Baker on the wall. I entered his office. He offered me a seat.

I do not talk politics at work. I definitely never ever talk religion at work as an attorney. (I have been known occasionally to discuss religion in my other career, as a synagogue rabbi.) I wear a yarmulka.

The guy interviewing me immediately did the politically incorrect and said, “I see you are wearing a yarmulka. What are your thoughts about Israel and the West Bank?”

I could not believe the question. People just do not ask that. And certainly not during an interview to practice complex civil litigation at a major national law firm. I delicately responded with a soft joke, trying to change the subject. However, like a rabid dog, this fellow would not leave it alone: “What are your thoughts about Israel and the West Bank?”

I softly asked him why he wanted to go that route in the interview instead of discussing my litigation skills and experience. He explained that he had worked as a top aide to Secretary of State Baker, and he then proceeded to lambaste Israel, its political leaders, and said something quite inappropriate about Jews. It was surreal. He made his point pretty clearly: If I am strongly supportive of Israel, there will not be room for me at that law firm.

I got the point and quickly grasped that this interview was going nowhere. So I smiled gently, and I replied: “Well, I guess I will not be working here. I love America deeply and passionately, and yes I also have a deep affection for Israel, just as Italian-Americans have a special place in their hearts for Italy, just as Irish-Americans relate warmly to the Old Sod. In terms of my political views on the Middle East, I believe that Israel should annex the West Bank and extend sovereignty over all of it. I do not even call it ‘West Bank’ but ‘Judea’ and ‘Samaria.’ In fact, I was part of a group of 35 young families ten years ago, before I went to law school, who pioneered creating a new Jewish community in Samaria, what you and Mr. Baker would call a ‘West Bank Jewish settlement.’ I later came back to America and went to law school. But that Samaria Jewish community is one of the proudest achievements of my life, and I will tell you that Israel never will leave that land. There now are thousands of Jews living there. And you can tell that to James Baker, too.”

He got from me what he wanted. But he had one more question: “And what is your opinion of James Baker as a person?”

I responded: “You mean the guy who said ‘F- – – the Jews’? Well, he is entitled to his opinion. You now have asked me my opinion. I regard James Baker to be a bastard. And I regard people who admiringly worked for him not only to be bastards but also to be lowlifes. Any more questions?” End of interview. I went to work somewhere else — same salary, same benefits. All the major law firms pay the same.

George H.W. Bush should have removed Baker, as other Presidents remove cabinet officers who do not represent Administration values. However, Baker accurately reflected Bush Administration values. By contrast, Ronald Reagan’s Secretaries of State had been Gen. Alexander Haig and George P. Shultz, each fantastic.

The Macrocosmic: Destroying the Reagan Revolution and Institutionalizing the Era of the RINO

On the bigger macrocosmic plane, I identify George H.W. Bush as the man who destroyed the Reagan Revolution. No Democrat could have done that. Only a Republican successor to Reagan. Bush never believed in Reagan’s economic principles and in the economic miracle that Reagan wrought. He mocked Reaganomics as “voodoo economics.” When he took over after Reagan was termed-out, he reversed the great economic miracle of the post-Carter age, and he sent the economy into a downspin that cost him the White House. He promised “No New Taxes” and then imposed new taxes. He brought in the RINOs who transformed the Reagan conservative revolution and left the GOP vision of conservatism stymied for the next quarter century. Symbolic of his vision thing, he named David Souter to the United States Supreme Court. That was not prudent.

Theodore Roosevelt had been a transformative President. TR chose not to seek reelection, and he promoted the candidacy of his protégé, William Howard Taft. Roosevelt came to believe that Taft had become too conservative, so TR formed the Bull Moose Party to oppose Taft. With the 51% Republican vote split between the two, Woodrow Wilson was elected with 41% of the vote. The next transformative President, Franklin Roosevelt, died in office and was succeeded by Harry Truman who carried out FDR’s program. And then came the next transformative President, Ronald Reagan. Reagan did not die in office. He did not choose to bypass reelection; rather, he was termed out. But he was so popular that his coattails carried his Vice President, George H.W. Bush, into the White House. Bush had Reagan to thank for making it in, and he inherited a fabulous prepared table. As history confirms, Reagan had driven the Soviets into terminal decline, with collapse of the USSR around the corner. America was strong and at peace. The Iranian hostages were at home, safe and sound. The economy was humming. A new morning had dawned in America. All Bush had to do was be prudent and stay the Reagan conservative course — and also secure the southern border. Instead, he went full-steam RINO, promised a “kinder, gentler” approach than Reagan’s kind and gentle approach, introduced new taxes that he promised never to launch, tanked the economy, and fatally terminated the Reagan revolution.

Today the liberal-left media honor his memory. From CNN to MSNBC to NBC and ABC, they all mourn and miss him. I can understand why. May G-d rest his soul.