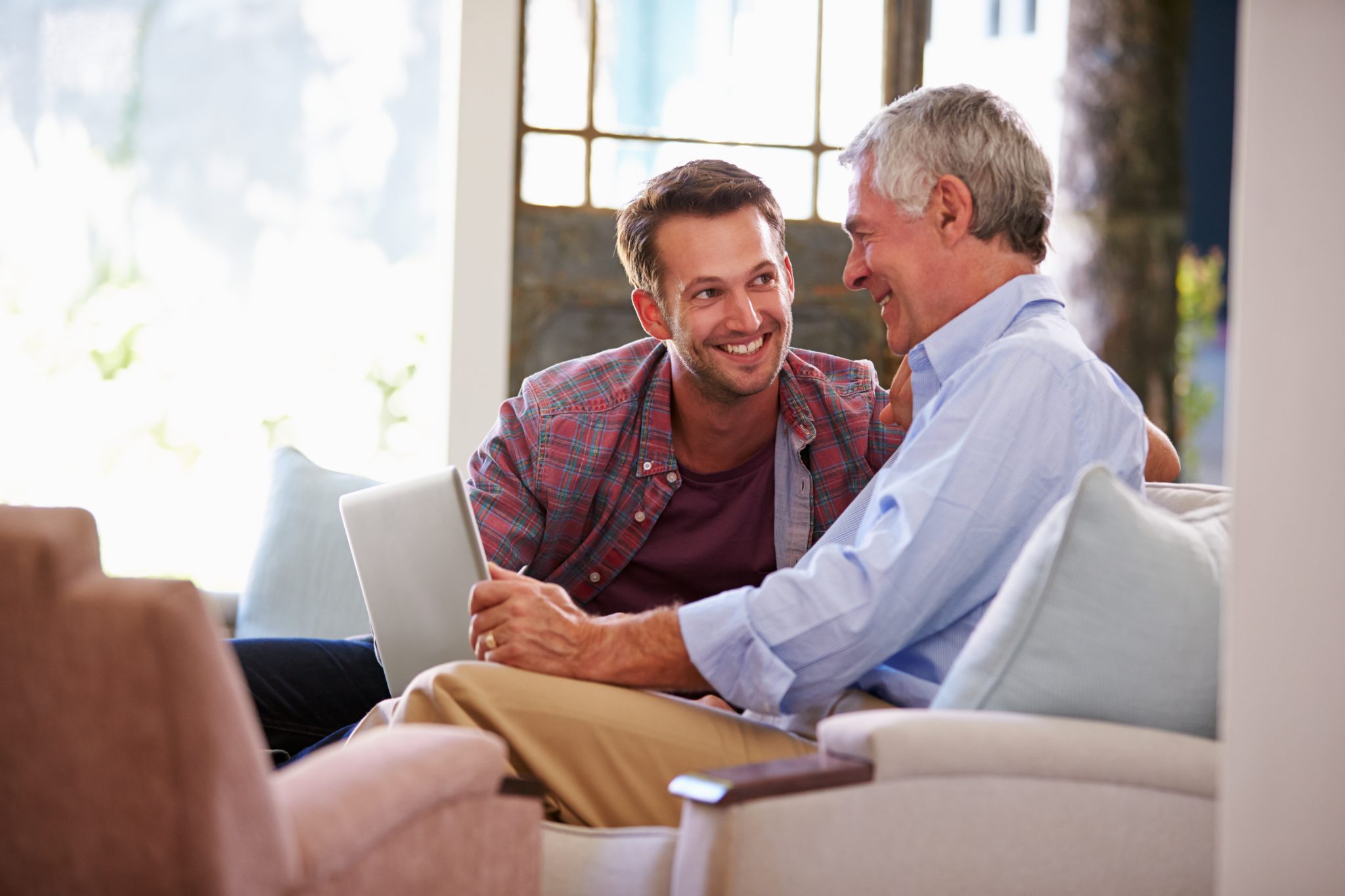 If you can talk with crowds and keep your virtue,
Or walk with Kings — nor lose the common touch,
If neither foes nor loving friends can hurt you,
If all men count with you, but none too much;
If you can fill the unforgiving minute
With sixty seconds’ worth of distance run,
Yours is the Earth and everything that’s in it,
And — which is more — you’ll be a Man, my son!
— Rudyard Kipling, “If”

This is nothing new. Throughout his political career, Lunch Bucket Joe has loved quoting his dad. Or, perhaps, he just loves attributing statements to the old man — whether or not the guy ever said these things, and even if they’re quotidian nonsense of the kind that millions of dads must have said at some point but that nobody ever remembers because these banalities were hardly their greatest hits.

For example, Biden has repeatedly said that on that now-famous occasion when his dad was fired from a job, he told little Joey: “It’s going to be okay.” And then there was this deathless remark, which was delivered on the same occasion, and which Biden has cited over and over, as if it held the key to all wisdom: “Joey, you got to be a big boy.”

Did his dad also say “Time flies”? Or “Haste makes waste”? Or “What goes around comes around”? Maybe, but not in Joey’s company, because if he did, twelve to seven he’d quote those pearls too.

Don’t get me wrong: America can’t expect — and almost certainly shouldn’t want — a president who effortlessly tosses off aperçus from Locke and Aquinas and Marcus Aurelius. Still, there’s something scary about a presidential hopeful who’s so, well, hopeless that his intellectual foundation seems to consist of nothing but vapid chestnuts — instantly forgettable verbal nothings that he not only proffers without shame but proudly attributes to his beloved père.

There is, of course, more than one way to read Joe’s purported quotations from his dad. Was Biden Sr. really an inveterate spouter of staggeringly inane clichés — which is to say, something of a chucklehead, like his lightweight scion? Or was he a reasonably savvy guy (he did manage to scrounge a living, after all, in the real world, not in politics) who realized that he’d sired a hopeless dimbulb — realized, that is, that young Joe’s mind, to use that word loosely, was incapable of digesting anything but vapid truisms — and that any counsel he chose to send in that direction should be as unsophisticated as possible?

Or can it be — third possibility — that Biden’s dad never said any of these things at all? Could it be that Neil Kinnock’s dad was the real source of these platitudes?

Remember the Kinnock story? In 1987, Biden gave a speech in which he described himself as the product of a coal-mining family. In fact, Joe Sr. was a used-car dealer. He did other things, too. But he was never a miner. Nobody in the family was ever a miner. Nobody! It soon turned out that Amtrak Joe had stolen not only sizable chunks of a speech by British Labor politician Neil Kinnock, but had also stolen Kinnock’s personal background — while deep-sixing his own actual dad. Neat job.

Which makes sense. The point of Dad Stories, after all, is to explain how you came to be the man you are and to believe the things you believe. Quoting one’s dad is a way of giving the old man a bit of credit for what you’ve accomplished in your own life. But if you’re an empty vessel without any core convictions and you haven’t accomplished much of anything other than to get yourself elected and re-elected to political office over the course of half a century, somebody else’s Dad Stories can work just as well for you as your own, right?

If you’re old enough, you may recall that when the Kinnock borrowings came out, it caused an international kerfuffle and forced Joe to quit the race for the White House. He learned something, at least, from that experience. This time around, so far as I know, he hasn’t made any bogus claims about his dad. This isn’t to say that he’s completely stopped lifting material from other politicians’ speeches. That would be too much to expect.

Anyway, here’s another of Biden Sr.’s alleged gems, presumably uttered on a day when dad was feeling more loquacious than usual:

Now, do you really think Biden’s dad ever actually said anything like that? The whole spiel? Note, moreover, that Biden starts with: “He used to say.” Which means we’re expected to believe that the old man delivered this speech on multiple occasions. What, was he starring in a some long-since-suppressed early version of Death of a Salesman?

That wasn’t the only thing that Biden Sr. supposedly said more than once. Get a load of this: “My dad always said, ‘Champ, the measure of a man is not how often he is knocked down, but how quickly he gets up’” First: “Champ”? Really? Second: Always said? Exactly how many times did the paterfamilias say this? And why? Is it possible he kept repeating this fortune-cookie bromide because he knew that poor addle-pated little Joey wouldn’t be able to remember anything Pops ever said until he’d said it at least twenty or thirty times?

Like the Clintons and Obama, but unlike Donald Trump, Biden was a longtime opponent of same-sex marriage, and voted for the Defense of Marriage Act. But after he put his finger in the wind and flipped on the issue, he started telling gay audiences that one day, when he was in his teens, he and his dad saw two men kissing out on the street — a startling spectacle in those days —  and his dad, apparently responding to young Joey’s shock, said: “Joey, it’s simple. They love each other.”

When would that have been, in the 1950s? Where was it, in Wilmington, Delaware, where the Bidens lived at the time? So the question comes down to this: Did two gay guys in Wilmington actually kiss in public in the 1950s in front of a teenage Joe Biden and his dad? And did his dad, the used-car salesman, actually display such remarkable, 21st-century-style tolerance?

What do you think?

Does anyone on earth believe this ever happened?

Seriously, though, there’s a lot about Biden’s career that suggests he learned a thing or two from his used-car salesman dad. For example, Biden grew up to be, like any good salesman, an oily glad-hander. He was, as the story goes, a phenomenally lousy student but a “natural leader” who got himself elected high-school class president. Apparently “natural leader” means a guy who doesn’t have much on the ball but can nonetheless sell himself effectively — not unlike a used-car salesman, n’est-ce pas?

Used-car salesmen are notorious for matter-of-factly turning back odometers and altering paperwork. This kind of casual crookedness has been a hallmark of Biden’s career, from school days onward. In law school he copied several pages of an article out of a law journal and put his name on it — not just a violation of basic academic rules but an amazingly dumb move. He’s also lied prolifically about his college grades and degrees, about receiving a law-school scholarship, and about marching in civil-rights demonstrations, all of which is pretty dumb too. (And, for a U.S. Senator, downright pathetic.) I guess we should be impressed that when Biden faces campaign audiences he doesn’t slip and say: “What do I have to do to put you in a car today?”

Serious question: Is Biden where he is today precisely because he learned from his father that, even if you don’t have the smarts, and especially if you don’t have a great deal in the way of scruples, you can go a hell of a long way with a big toothy smile, a firm handshake, and a smooth line of absolute bull?