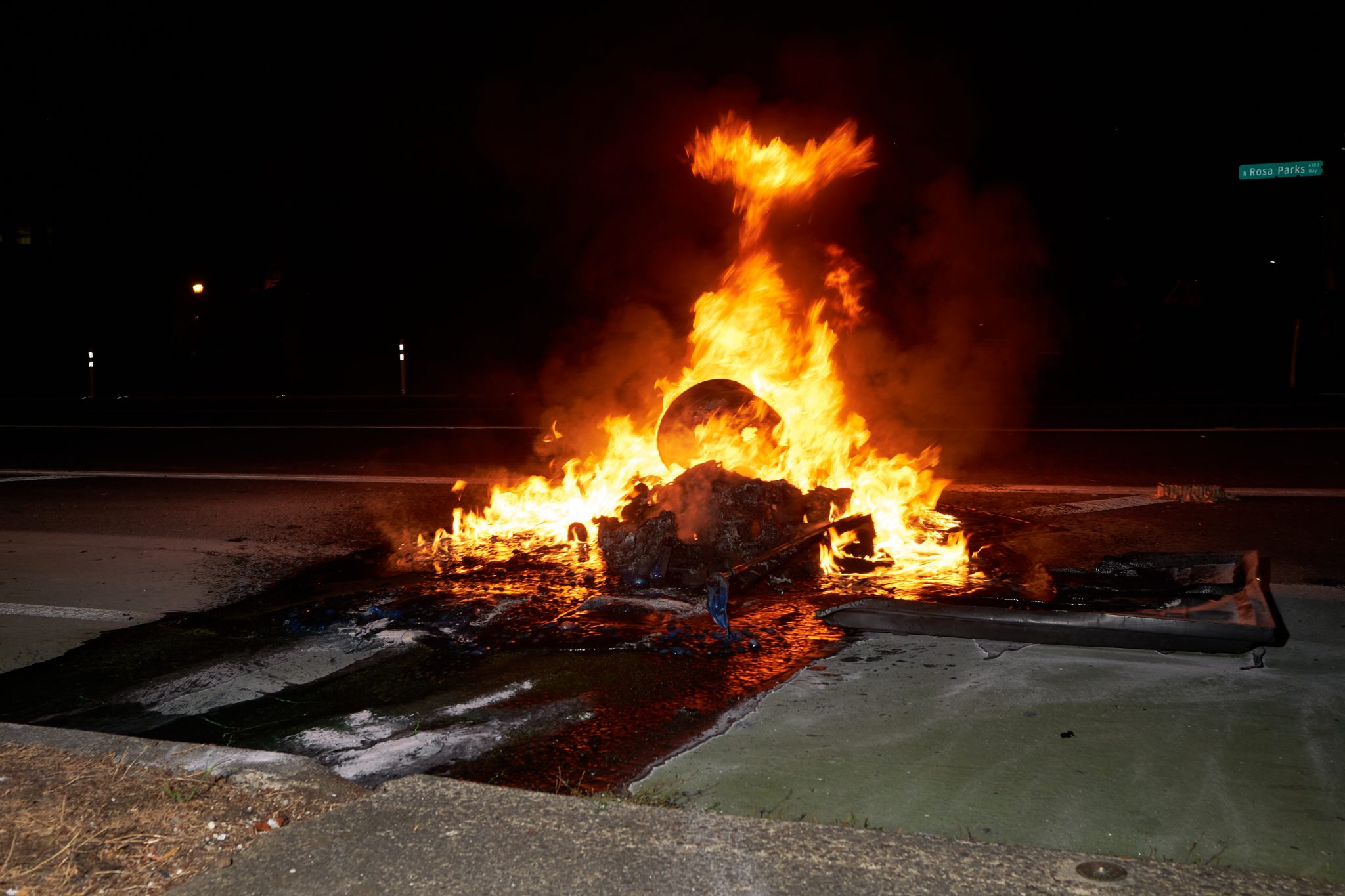 Freddrick Hadden was shot to death by a sheriff’s deputy in Burke County, Georgia. A habitual felon who had only recently been released from prison, Hadden had kidnapped his ex-wife at gunpoint. When Deputy Eric Madison pursued Hadden to a home near Hephzibah, the woman escaped Hadden’s vehicle. She was shot twice by Hadden before Deputy Madison returned fire, killing the kidnapper and saving the woman’s life.

That incident in August 2019 attracted no national media interest. CNN didn’t cover it, there were no protests, and Joe Biden has never mentioned it. Perhaps that’s because Freddrick Hadden was white and Deputy Madison is black.

While pretending to condemn this violence, Biden never once said the word “Antifa,” to which Portland killer Michael Reinoehl swore allegiance. Reinoehl died Thursday in a shootout with police, which is how violent criminals so often die.

For months, Biden and his media allies have abetted Black Lives Matter activists in inciting racial fear and hatred, claiming that “systemic racism” by police accounts for the deaths of black suspects at the hands of police. Even though research clearly disproves such claims, the facts haven’t stopped Democrats from trying to exploit this slanderous narrative in their effort to defeat President Trump. Last week, after a self-declared “100% Antifa” radical murdered a Trump supporter in Portland, Oregon, Biden doubled down on this anti-police rhetoric, blaming “bad cops” for “racial injustice in America,” while bizarrely accusing Trump of “stoking violence in our cities.”

Contrary to Biden’s claims, however, the “violence in our cities” — mobs rioting in Portland and Seattle, looting in Chicago and New York, and attacking police everywhere — clearly has been fomented by anti-Trump activists, including the “trained Marxist” leaders of Black Lives Matter. The mobs who hate cops also hate Trump and, as Mark Thiessen pointed out in the Washington Post, these riots are happening in cities where Democrats have been in complete control for decades. It is also in Democrat-controlled cities, of course, that there have been so many high-profile cases of black suspects dying at the hands of police, including George Floyd in Minneapolis and, more recently, Deon Kay in Washington, D.C., and Daniel Prude in Rochester, New York. Exactly how Trump is to blame for any of this is something that the senescent Biden could not be expected to explain, but beyond the context of the presidential campaign, the fabric of our society is endangered by the distorted image of law enforcement being promoted by Democrats and their media propaganda organs.

For weeks, Biden had no comment on the riots as city after city erupted in violence, until polls showed that the chaotic destruction was hurting his campaign, at which point the Democrat accused Trump of “fanning the flames of hate and division.” The flames in Portland this past weekend came from Molotov cocktails hurled by what the media continue calling “mostly peaceful” protesters (one of whom nearly immolated himself in the process). While pretending to condemn this violence, Biden never once said the word “Antifa,” to which Portland killer Michael Reinoehl swore allegiance. Reinoehl died Thursday in a shootout with police, which is how violent criminals so often die.

The national media obsess over a comparative handful of controversial cases, like the shooting of Jacob Blake in Kenosha, Wisconsin, but they generally ignore the far more numerous cases in which police are unquestionably justified in using deadly force, because those cases offer no opportunity to exploit the factor of race. According to an analysis by the Washington Post, about 1,000 Americans a year are fatally shot by police, and about 94 percent of those shot are armed. A majority of the unarmed people shot by cops are white. In 2019, for example, of the 55 unarmed people shot to death by police, 25 were white and 14 were black, according to the Post. No matter how many hours CNN devotes to smearing cops as racist murders, or how often Biden blames “systemic racism,” the facts are still the facts, and, as author Heather Mac Donald has stated bluntly, “There Is No Epidemic of Fatal Police Shootings Against Unarmed Black Americans.”

Simple question: Whom are cops shooting, and why are they shooting them? One way to get beyond mere statistics about these incidents is to watch the police bodycam videos that are now routinely made public whenever an “officer-involved shooting” (OIS) occurs. The popular Police Activity video channel on YouTube (which has more subscribers than CNN has viewers) is a valuable resource in this regard. Since 2016, Police Activity has posted hundreds of videos of OIS incidents, most of which never became national news:

The point in recounting such cases is that nobody in the national media ever calls attention to incidents like these. There are no activists ready to incite a riot when cops shoot a white suspect, nor is there any political advantage for Democrats in these cases, and therefore, CNN and the rest of the national media ignore these cases. By focusing obsessively on a handful of racially volatile cases, Democrats and their media allies are creating a wildly distorted image of law enforcement. This has disastrous consequences, especially in the black community, because of what has been called “the Ferguson Effect.”

After the 2014 riots sparked by the police shooting of Michael Brown in Ferguson, Missouri, St. Louis Police Chief Sam Dotson called attention to a surge in crime in his city: “It’s the Ferguson effect. I see it not only on the law enforcement side, but the criminal element is feeling empowered by the environment.” By mid-2015, data showed a nationwide increase in violent crime, as Heather Mac Donald explained in the Wall Street Journal:

Gun violence in particular is spiraling upward in cities across America….

The news media pump out a seemingly constant stream of stories about alleged police mistreatment of blacks, with the reports often buttressed by cellphone videos that rarely capture the behavior that caused an officer to use force.

Almost any police shooting of a black person, no matter how threatening the behavior that provoked the shooting, now provokes angry protests…. Arrests in black communities are even more fraught than usual, with hostile, jeering crowds pressing in on officers and spreading lies about the encounter.

Acquittals of police officers for the use of deadly force against black suspects are now automatically presented as a miscarriage of justice….

Politicians and activists in New York and other cities have now taken aim at “broken windows” policing. This police strategy has shown remarkable success over the past two decades by targeting low-level public-order offenses, reducing the air of lawlessness in rough neighborhoods and getting criminals off the streets before they commit bigger crimes….

Contrary to the claims of the “black lives matter” movement, no government policy in the past quarter century has done more for urban reclamation than proactive policing. Data-driven enforcement, in conjunction with stricter penalties for criminals and “broken windows” policing, has saved thousands of black lives, brought lawful commerce and jobs to once drug-infested neighborhoods and allowed millions to go about their daily lives without fear.

All of that is still very much true, and the important point is that this problem existed before Donald Trump became president. It is the height of irresponsibility for Biden and his media allies to blame Trump for violence in America’s cities, when the blame more properly belongs with the anti-police rhetoric of the Black Live Matter movement, and their accomplices in the media.

When he responded to the call that sent him into a deadly shootout with Freddrick Hadden last August, Deputy Eric Madison had only been with the Burke County Sheriff’s Department for eight months, but he had previously served eight years in the Navy. His military training may explain why Deputy Madison was able to remain calm and shoot with deadly accuracy in his confrontation with Hadden.

The national media ignored Deputy Madison’s heroic deed, just as it ignores the daily heroism of cops everywhere. CNN was not there last November when Deputy Madison was awarded the Medal of Valor by Georgia Gov. Brian Kemp. “Deputy Eric Madison did not count the costs or weigh his options when he showed up on the scene that day,” Kemp said. “He vowed many years ago, as you all know, to serve and protect.… He deserves all the praise and accolades that we can give him even though he doesn’t want them.”

Public safety requires armed police, who risk their lives in those frightening moments when they confront dangerous criminals. Cops are the front-line troops who protect us all from crime. It is irresponsible — and demonstrably false — for Biden and his allies to accuse heroic law-enforcement officers of being agents of “systemic racism,” just for the sake of winning an election. Every American must hope that voters of all races will reject this hateful message.