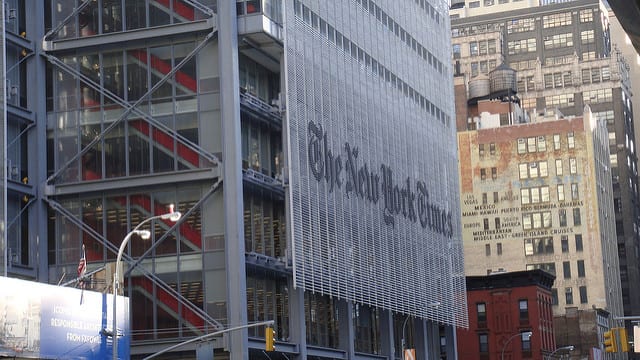 An interesting item popped up in America’s newspaper of record on Tuesday and it featured this headline:

Fake News and Bots May Be Worrisome, but Their Political Power Is Overblown

That’s right, after more than a year of breathless “reporting” about foreign influence on the 2016 election that portrayed the electorate as being more malleable than cruise ship hypnotist’s audience, The New York Times now wants us to know that it’s no big deal.

How easy is it to change people’s votes in an election?

The answer, a growing number of studies conclude, is that most forms of political persuasion seem to have little effect at all.

This conclusion may sound jarring at a time when people are concerned about the effects of the false news articles that flooded Facebook and other online outlets during the 2016 election. Observers speculated that these so-called fake news articles swung the election to Donald J. Trump. Similar suggestions of large persuasion effects, supposedly pushing Mr. Trump to victory, have been made about online advertising from the firm Cambridge Analytica and content promoted by Russian bots.

Perhaps “people are concerned” because American media outlets have been telling them to be.

The article goes on to cite several studies that say bots and fake news aren’t having any real impact because — SURPRISE — people who have already made up their minds aren’t likely to be swayed.

The problem when any mainstream media outlet discusses fake news is that they are using their definition of it. They mean stories and advertisements planted by Russian agitators or whomever the perceived bogeyman is at the moment as far as they are concerned.

When President Trump first began using the term, however, he was speaking about American news sources, not the Russians.

While the Times may not be the worst of the lot — that would be CNN — but they are definitely part of the problem. I wish that I had begun keeping track of the alerts on my phone from the Times and WaPo that cite anonymous sources and all but promising that THIS would finally be the Russia/Trump connection that would prove everything.

The first few dozen were irritating, the numerous ones since now just read like some long, bad, serial work of fiction that will never have an ending.

In the time since President Trump took office, the American MSM have been opining, not reporting. When Op-Eds are presented as journalism, that’s fake news.

Of course, the media in this country have been blurring the lines between reporting and opinion for a very long time, but it’s reached ridiculous lows in the Trump era.

What’s worse, is that this fake news does influence people. Liberal voters treat the MSM as straight news. Opinions can be swayed when the consumer of the fake news believes he is reading real reporting.