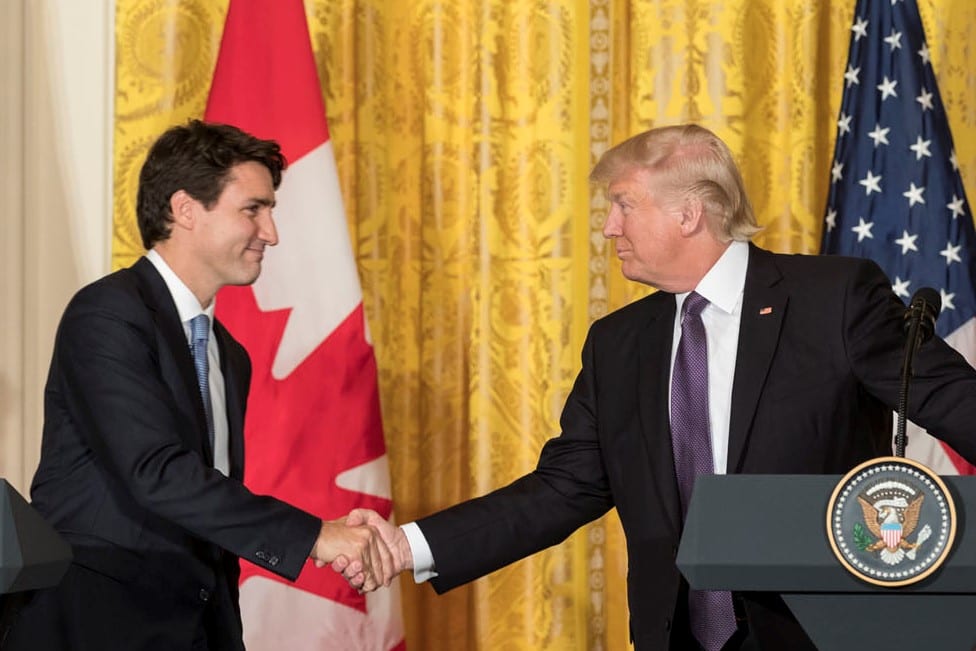 Justin Trudeau plays host at the G-7 meeting in Quebec on Friday, and there he’ll meet Donald Trump. I’d love to be a fly on the wall and hear what they say about the tariffs on Canada we announced last week.

I don’t think Justin is going to enjoy it, for two reasons. First, Trump sees American policies on trade and national defense as joined at the hip. Second, the president ranks foreign leaders on a scale of manliness, where Canada is near the bottom of the list.

On national defense, Justin doesn’t have much to trade. Unlike China. We should be hitting China hard on trade. They’re ripping off our technology and discriminating against our products. And Trump reminded us of this again and again when he ran for president. But once in office he muted his tone, after he met with Chinese President Xi at Mar-a-Lago in April 2017. What the Chinese leader promised and is giving us is a modicum of help in pressuring the North Koreans to stand down. Like Trump, Xi sees trade policy as an aspect of foreign policy, and he doesn’t want Trump to carry out his threats of retaliation against Chinese trade practices.

For China, it’s been a good deal. They’ve given up a bit and gotten a lot. They want the North Koreans to tone it down, but they don’t want them to go away. Better if they remain an irritant, so that China can continue to get a pass from us on trade issues. And we’re not even talking about the Chinese desire to rule over the South China Sea trade routes.

While Xi has something to trade on foreign policy, the same can’t be said of Trudeau. He’s neither a threat, as is China, or a reliable military ally, as Canada was in the Second World War and in Korea, or even as it was under Stephen Harper in Afghanistan a few years ago.

That’s part of it. The other part is that Xi is a tough hombre. He is a geopolitical opponent, but he’s also strong and assertive, and worthy or respect.

You can’t say the same thing about Trudeau. Remember the conversation that Trump had with Trudeau a few months back? Trudeau reported that he told Trump that American was running a trade surplus with Canada. And that’s true. It’s a true deficit on goods and a trade surplus on services, and on net it’s a trade surplus. But Trump told him, “no, it’s a trade deficit.” Afterwards Trump boasted that he didn’t know which it was, deficit or surplus. He just said it was a deficit.

The press jumped on Trump for this. Look, he’s lying, they said. But it wasn’t about who was right. It was about an alpha dog telling a beta who was boss.

But then we knew that Trump saw things in terms of who was the alpha dog. That was his entire campaign against his Republican opponents in 2016.

When he talked that way, the girly men in the media clutched at their pearls. But a lot of American voters, men and women, said “Finally!” They were sick and tired of being told about toxic masculinity. They didn’t think that every man was a thug and that every date amounted to rape. They saw how our society had bought into the craziest of radical feminist ideas from the 1970s. They didn’t think that our public schools should instruct kindergarten children in gender fluidity. For them Trump was a breath of fresh air.

Trump voters understood, what Jordan Peterson today reminds us, that gender differences are real and that there are masculine as well as feminine virtues. Men are expected to be assertive and courageous, virtues not conspicuously shared by many other Republican leaders.

So contrast Trump with Trudeau, who is feminized to the point of ridicule. He made a point of having a cabinet that was 50 percent female even though only 27 percent of the MP’s in his caucus are women. He interrupted a lady who spoke of mankind to say, “Actually, we prefer to say personkind.” And then there were the Bollywood costumes he dressed his family in when they visited India. Even the Indians said it made them gag.

So is that how to conduct foreign and trade policy, on a manliness scale? That can be stupid, and I don’t think the tariffs Trump announced will help American workers and our economy. But I also don’t think anyone should be surprised when international disputes come down in part to “who’s your daddy.”

F.H. Buckley is the author of The Republican Workers Party: How the Trump Victory Drove Everyone Crazy, and Why It Was Just What We Needed, forthcoming from Encounter.