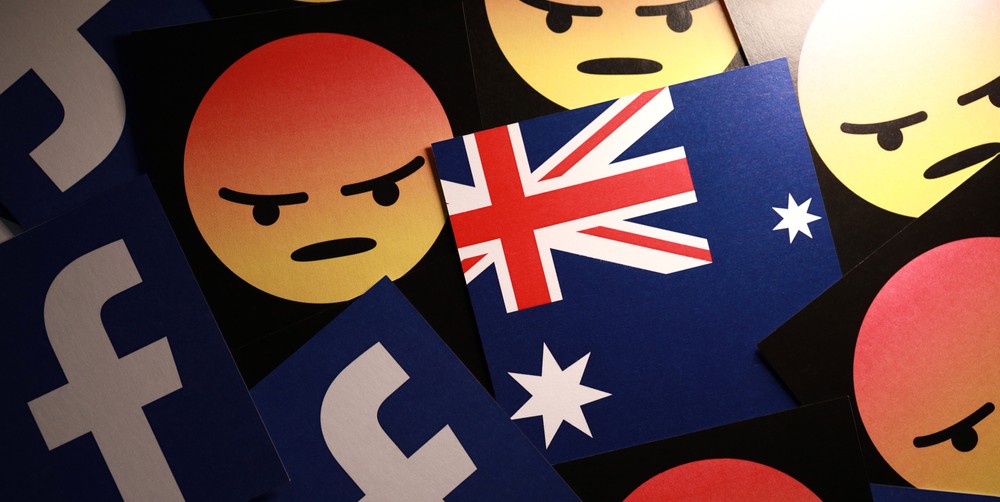 A warning: near the bottom of this column you’ll find a completely shameless, though entirely relevant, plug.

There, I said it. And I don’t apologize.

Have you been paying attention to the Facebook–Australia dustup? It’s a fascinating and entirely predictable train wreck, which bears close scrutiny here.

If you haven’t been watching it, you might be tempted to believe the controversy has to do with censorship. After all, Facebook blocked the sharing of material from news sites based in Australia, going so far as to shut down a number of political organizations in that country from posting content.

But it’s a little more complicated than Mark Zuckerberg being the fascist scum he showed himself to be last year. The Aussies aren’t exactly the rebel alliance to Zuck’s galactic empire, even though it might be fun to think of them that way.

What really happened was that Australia’s parliament passed a measure that would force Facebook and Google and other Big Tech oligarchs to pay its news sites based on a government-set rate for their content appearing on its platform. That’s a pretty obnoxious law, and it’s made even more obnoxious by the fact the Aussies aren’t exactly playing Robin Hood here.

Some 70 percent of the print circulation in Australia is controlled by Rupert Murdoch’s company. This is Australia choosing its own monopoly over an American one. A Murdock paper, the UK Daily Mail, reported the Facebook shutdown in decidedly less than objective fashion:

Australia has been plunged into a state of shock after Facebook ambushed the country with its unjustified ban on news – but it’s far from the first time the so-called social network has made headlines for all the wrong reasons.

The social media juggernaut, helmed by CEO Mark Zuckerberg, on Thursday banned Aussies from reading and sharing local news in response to a world-first law to make tech companies pay media outlets for the content they use.

When Australians went to reliable Facebook news accounts they were ominously met with a message saying ‘no posts’ were available – and even non-news pages providing desperately needed services were banned.

Prime Minister Scott Morrison has condemned the ‘arrogant and disappointing’ move while refusing to bow to intimidation from the tech giant.

A former Facebook CEO even encouraged Australians to delete the app in protest at the ‘irresponsible’ and ‘reckless’ new policy.

Google actually decided to comply with the law and agreed to pay up. Facebook chose a different option, and an international controversy resulted.

And Canada is now talking about following Australia’s lead. TV and print media in Canada is thoroughly corporatized and monopolistic, just as it is in Australia.

The situation is resolving itself in Australia, as the government there backed off a bit and let Facebook choose with whom it will do business, and in return Facebook turned the lights back on for Australian media on its platform. Campbell Brown, Facebook’s vice president of global news partnerships, characterized the arrangement thusly:

After further discussions with the Australian government, we have come to an agreement that will allow us to support the publishers we choose to, including small and local publishers…. The government has clarified we will retain the ability to decide if news appears on Facebook so that we won’t automatically be subject to a forced negotiation.

Yes, she’s that Campbell Brown, the one from CNN, in case you thought the name was familiar.

Honestly, very few people should give a red damn what the outcome might be between Big Tech and Big Media as they slug it out over who gets paid what. As Henry Kissinger quipped about the Iran–Iraq War, the preferred outcome is that both of them lose. The media corporations are upset because Facebook and Google have destroyed their ability to profitably sell digital advertising, and that’s a very valid concern given that Google and Facebook (and Amazon as well) control more than 80 percent of the digital advertising market. That hegemony has allowed them to dramatically undercut advertising rates charged by publishers and independent ad networks — with the specific effect of short-changing what publishers can get paid in the ad market.

At my site The Hayride, we’ve seen our revenues from ad networks take a massive dive over the last several years. Lots of sites like mine have gone out of business as a result. Others have attempted to move to a subscription model, and there are lots of journalists and pundits, such as Matt Taibbi, Glenn Greenwald, and Erick Erickson, who have abandoned traditional websites in favor of subscription-based operations like Patreon and Substack. That works to an extent, though one senses the readers will, after subscribing to several of those accounts, have coronaries looking at their monthly bank statements and seeing 12-15 separate lines for online subscriptions.

Does anybody think that having the government set rates for shares and impressions on Twitter or Facebook or Google’s platforms and forcing the tech oligarchs to pay media companies accordingly will produce worthwhile results in America?

That’s a disaster waiting to happen. We’ve already seen with the way Google has demonetized Prager University and Steven Crowder and others on YouTube that abuse of the revenue-sharing process can and will be rampant. What’s almost certain is that Big Tech will get together with Big Media to screw independent publishers like The American Spectator, podcasters, YouTubers, bloggers, and other independent content creators.

Which brings me to my shameless plug.

Frequent readers of this column may be aware that I’m involved in a project to create a new social media app called The Speakeasy, which is dedicated to existence as a free speech platform where users are customers rather than the product. Our business model will be a whole lot smarter, more inclusive, and less problematic than what Big Tech has imposed on the internet.

Both the Left and the Right hate Facebook and Twitter for the same reason; they just see different ugly manifestations of it. The Right hates the censorship of those platforms and perceives it’s ideologically based (and are not wrong in that perception). The Left hates the fact those apps harvest personal information and sell it to third parties who then produce creepy, hyper-targeted advertising to manipulate buying patterns.

Both abuses are separate facets of the same reality, which is that as a user you’re a hen in a hatchery. What they want from you is for you to keep telling them how to sell you things, and when you wax eloquent about stolen elections or hydroxychloroquine you are not aiding them in that process.

Big Media doesn’t really complain about any of that, because (1) they like the idea of independent and particularly conservative competitors being throttled, as that serves to halt the decline of corporate media’s reach and influence, and (2) their reaction to Facebook’s creepy hyper-targeted ads is envy, not outrage. If corporate media had the ability to manipulate people on a granular level with TV, radio, print, or digital ads like Facebook does, they wouldn’t hesitate for a second to execute such a plan.

What we’re working toward as we start up The Speakeasy is building an ecosystem based on a tiny monthly subscription — just $2.99 per month or $29.99 per year to start — in which publishers building channels will share, and users can choose up to 10 channels as part of that basic subscription (more will cost a tiny bit extra). We won’t harvest anybody’s personal information — the $2.99 covers that question — and while there will be advertising it’ll be based on the old, less-creepy model. Publishers can therefore monetize directly from the platform by growing an audience on a Speakeasy channel, which is a combination of a Facebook page and a YouTube channel, including any kind of content asset they want to upload (podcasts, videos, blog posts, memes, whatever) and being paid monthly according to their membership counts. We’ll even set it up so users can access ad-free content from our publisher partners if they want to offer that — we’re doing it with The Hayride now for Speakeasy subscribers.

The Speakeasy is up and running, though the channel model is still in development. We haven’t turned on the paywall yet, though subscriptions are available.

We think that’s a whole lot better model to follow than setting up the FCC as the arbiter of rates for shares and impressions. Somebody in Washington is looking at the resolution of that business in Australia as a perfect way to impose government control on Big Tech and get nice notices from Big Media, and that somebody is wrong.

Remember, when two lions and a lamb get to debating what’s for dinner, the result isn’t often a good one for the lamb. Independent publishers, and the general public as well, absolutely will not benefit from Big Tech and Big Media getting together to build a racket like the one they’ve cooked up down under.