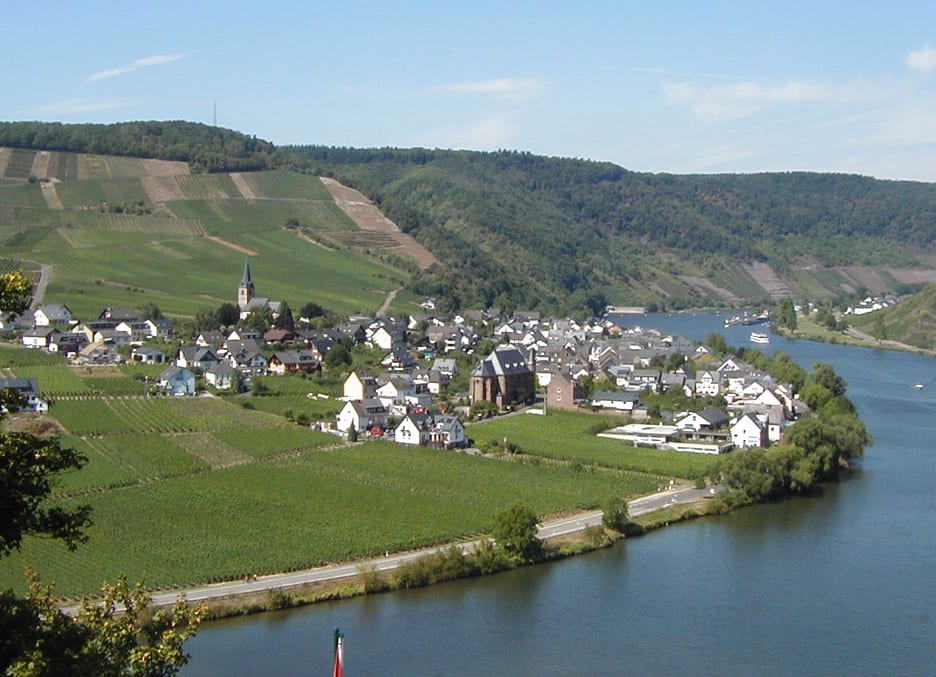 His hand felt like an oven mitt — filled with stone. “My god,” I thought as I removed my paw, “those are hands that have worked the vines.” Which is true.

Raimund Prüm is a mountain of a man, and he and his family having been making wine for a very long time. Some of the vines are 130 years old. The Prüms have vineyards on the slopes above the Mosel River, whose various formations of slate have enviable effects on the grapes. Raimund — with help from his wife Pirjo — oversaw the operation from 1971 until recently, when he put his daughter Saskia in charge.

I’ve enjoyed my share of riesling over the years — Dr. Konstantin Frank’s are a favorite — but it never has been my favorite wine. I tend to drink white wine in warm weather, and too many of the rieslings I have tried are sweet. Maybe it is my thick northerner blood, but sweet drinks just do not appeal to me when the Mercury is up.

And it was a balmy May day when Raimund was here in Washington, D.C. The thought might have entered my mind: “Will he squash me like a grape if I show little enthusiasm for his wines?” But it did not have the chance, because before I even met the man his lovely wife saw to it that I got a glass of S.A. Prüm Kabinett 2009, which was surprisingly un-sweet and wafted a honeysuckle aroma. It was, to my surprise, refreshing.

Over lunch, I tasted at least seven different S.A. Prüm rieslings and was really impressed. Not only were they all very good, each riesling was different. The Wehlener 2010 was acidic and nosed of pineapple; the Wehlener Sonnenuhr 2014 was almost a dessert wine and oozed fruit aromas; and Spatlese 2003 unleashed a bouquet of tropical scents. Some wines were dry, some were a little sweet, and one was full-on sweet (but not cloying). It was impressive to experience so many different flavor profiles coaxed from the same grape.

Both the Prüms emphasized that riesling should be treated as a year ’round drink, with different versions being better in different seasons. As for the old saw about red wine going with meat — humbug. They pair wild boar with riesling.

When I departed the tasting, I thanked Raimund for the eye-opening experience. He expressed his gratitude and invited me to come stay in the guest house at the vineyard. He said it had a fine bed, so that I could rest after we tasted wine early in the day. “You can rest so that you will be ready for the second tasting we will have.” Pirjo surprised me with a farewell hug and told me she would have two chilled bottles waiting for me in the guest house.

Time to book my flight. Tell my wife and the kids I’ll be a week or two late for dinner.

Kevin R. Kosar is the vice president of policy at the R Street Institute and the author of Whiskey: A Global History and Moonshine: A Global History. He is the editor and founder of AlcoholReviews.com.