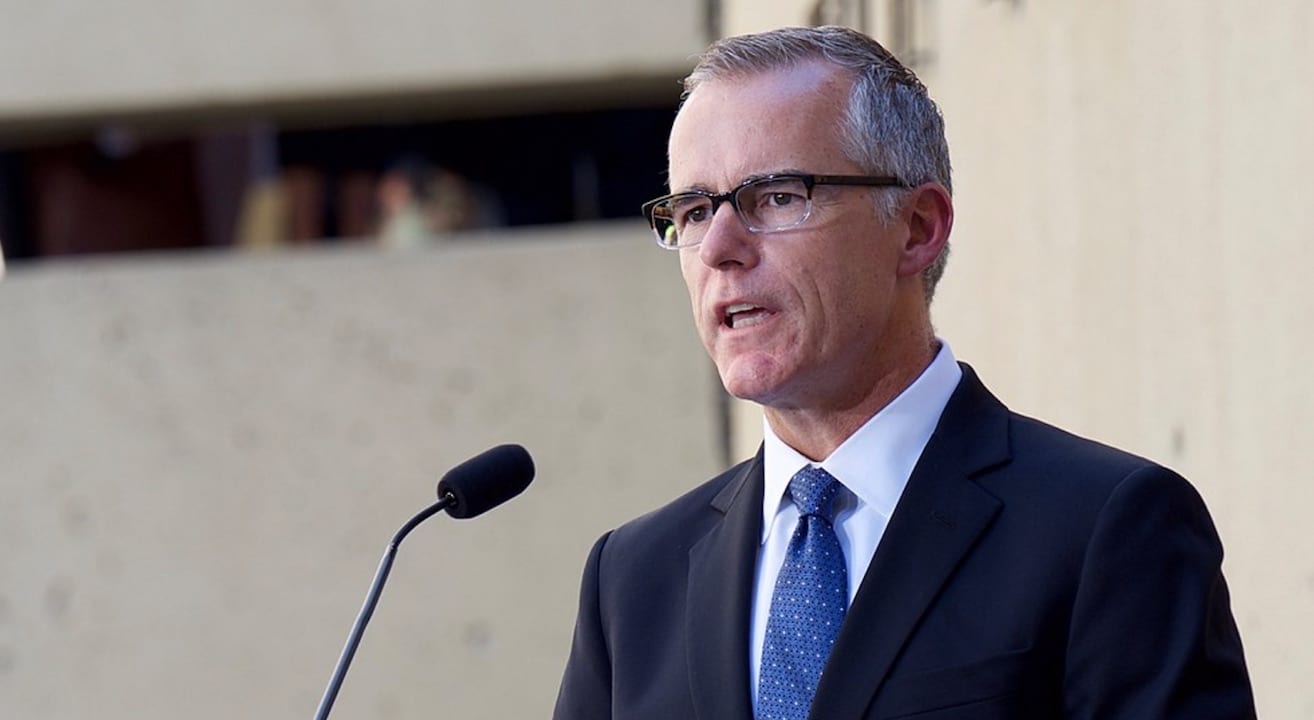 Former FBI Deputy Director Andrew McCabe will be on 60 Minutes Sunday night, and you can expect to see stories on him and his new book for days. You can also expect McCabe to portray himself as an upright lawman who stood up to President Donald Trump out of fear that the Russians may have helped carry Trump all the way to the White House.

There is one thing you should know about McCabe.

The Department of Justice inspector general found that McCabe was involved in an unauthorized leak and that he misled federal investigators who questioned him about it. The IG report doesn’t say that McCabe lied to the feds but concludes he engaged in a “lack of candor under oath.”

While Trump had been pushing for McCabe’s exit, FBI disciplinary officials recommended he be canned.

Remember that as you watch McCabe assert that he became a target because he called for the obstruction of justice investigation after Trump fired FBI Director James Comey.

“That’s obviously the problem he has as he’s doing his book tour and describing various situations with the president,” said Gregory A. Brower, Nevada’s former U.S. attorney and a former FBI congressional liaison who worked with McCabe.

McCabe’s interview with 60 Minutes comes ahead of the release next week of his memoir, The Threat: How the FBI Protects America in the Age of Terror and Trump.

At the time of his own firing, McCabe said in a statement, “I am being singled out and treated this way because of the role I played, the actions I took and the events I witnessed in the aftermath of the firing of James Comey.”

Trump first set his sights on McCabe because the FBI deputy director oversaw the FBI probe into former Secretary of State Hillary Clinton’s private email server, despite what Trump saw as a conflict of interest.

(McCabe’s wife, Jill McCabe, ran for the Virginia state Senate in 2015. She lost, but a PAC run by the Virginia Democratic Party and then-Gov. Terry McAuliffe, a supersize figure in Clinton’s world, gave her campaign hundreds of thousands of dollars. When the FBI began the investigation into the Clinton emails, McCabe did not recuse himself because the campaign was in the past and he was not involved in it. On Nov. 1, 2016, after the Wall Street Journal reported on McCabe’s role, he recused himself from the Clinton probe.)

As the Wall Street Journal started looking into McCabe’s role, he decided to leak information about a Justice Department higher-up having pushed him to back off on the Clinton probe because it was happening close to the 2016 election. Like so many leakers, McCabe was behind a leak that made him look good.

And when federal investigators started to probe the leak, McCabe told them a lot of information seemed to be coming out of the New York FBI office, according to the IG report.

The report also cited two New York FBI officials who said McCabe admonished them for the leaks. One wrote that McCabe told him there would be “consequences” if New York didn’t get to the bottom of it, and sent the message “Need leaks to stop. Damaging to org.”

When officials with the FBI Inspection Division questioned McCabe, they saw him as the “victim” of the leak and sent him a statement that stipulated he didn’t know the source of the Wall Street Journal leak or authorize anyone to share information with the paper. He didn’t sign.

Later, after McCabe decided to set the record straight and admit he was the source, an agent testified that he told McCabe: “Sir, you understand that we put a lot of work into this based on what you told us. I mean, and I even said, long nights and weekends working on this, trying to find out who amongst your ranks of trusted people would, would do something like that.”

McCabe said he was sorry but there was a lot going on at the time. Because there’s not much of a problem with federal investigators making innocent people nervous, is there?

On 60 Minutes, McCabe will talk about meetings at which Department of Justice officials discussed whether there were enough officials — the vice president and a majority of the Cabinet — to remove Trump under the 25th Amendment, as if they have authority to stage a coup of sorts.

Brower objects to the way Trump talks about the FBI probe as stacked against him. If there were conversations about the 25th Amendment, he added, “Obviously nothing ever happened.”

Got it. But when you see McCabe on television talking about his fears about Russia having gotten Trump into the Oval Office, remember that the inspector general concluded that he misled federal authorities — and he was so good at it; they believed him.