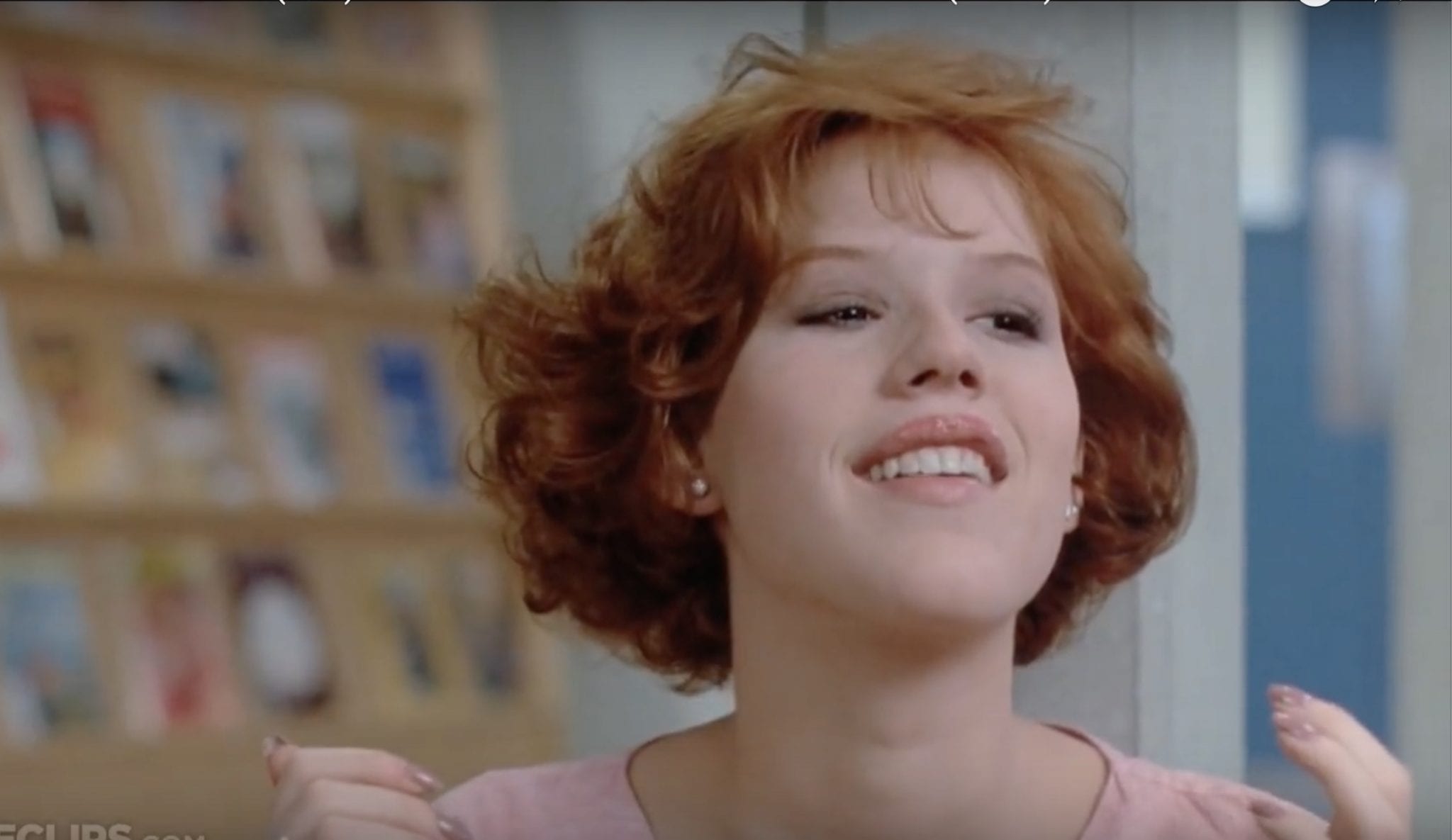 If not for John Hughes, then Molly Ringwald becomes the answer to a trivia question answered correctly only by Facts of Life fanatics. Yet, she too Me Toos the beloved, departed director.

No, John Hughes did not harass her, touch her, or belittle her. He included a scene in The Breakfast Club where a bad boy character acts like a bad boy to her good girl character. A fictional character sexually harassed another fictional character (seriously, that’s the issue). Specifically, Judd Nelson’s John Bender hides under a table where Ringwald’s Claire Standish — her last name seems significant — sits. From that vantage point, but just briefly from ours (the viewer), the teenage boy sneaks a peak at what lies beneath Claire’s skirt. Apart from the almost but not quite Hays Code way in which audiences encountered Bender’s close encounter, Hughes relied on an adult double rather than the teenage actress when filming the scene.

On numerous levels, the scene propels both Claire and Bender’s characters. It further establishes Assistant Principal Vernon as an authority figure (“I will not be made a fool of!”) feared by Claire but mocked by Bender. The movie misses something without it. But Ringwald, whose mother apparently acted as a self-appointed censor for Hughes’s films, wished her mom had prevailed upon Hughes to cut this scene too because she felt uncomfortable watching this scene with her daughter.

“What’s more, as I can see now, Bender sexually harasses Claire throughout the film,” the female Assistant Principal Vernon once known as Claire writes. “When he’s not sexualizing her, he takes out his rage on her with vicious contempt, calling her ‘pathetic,’ mocking her as ‘Queenie.’ It’s rejection that inspires his vitriol.”

Yes, and Angelo behaves as a villainous predator toward Isabella in Measure for Measure. Should we redact Shakespeare, too?

“How are we meant to feel about art that we both love and oppose?” Ringwald asks in the New Yorker piece. “What if we are in the unusual position of having helped create it? Erasing history is a dangerous road when it comes to art — change is essential, but so, too, is remembering the past, in all of its transgression and barbarism, so that we may properly gauge how far we have come, and also how far we still need to go.”

What does it mean to “oppose” art? One might dislike a movie or a novel or a song. But to say one “opposes” a movie or a novel or a song indicates a misunderstanding of movies or novels or songs. Do I oppose The Avengers, Human League’s “Don’t You Want Me,” and Arundhati Roy’s The God of Small Things? Or does that film, that song, and that book just not appeal to me the way they apparently appeal to so many others. One opposes a candidate or cause. Do some really believe that art belongs to a category that includes candidates and causes? Who prefers Leni Riefenstahl to John Hughes? That the person talking about an opposition to art does not belong to the Taliban, but instead acts in movies, wrote a novel, and performs songs suggests it is later than you think.

#MeToo seeks to raise awareness about real-life Harvey Weinsteins as it erases celluloid John Benders. There seems a cognitive dissonance at work in incessant tweets, speeches, and articles about sex pests here on this side of the silver screen and cutting-room-floor capital punishment for any such characters aspiring to move from a writer’s script to film. Ringwald wrote an article for the New Yorker in the fall called “All the Other Harvey Weinsteins.” It aimed to convince that the population of pests dwarfs previous guesses and that hassling behavior occurs more than people think. Now, in the spring, she writes an article nudging filmmakers to deny the existence of such people and exclude such behavior from movies.

The American Spectator‘s Ben Stein, whose career, like Ringwald’s, received a boost because of Hughes, recalled the writerproducerdirector for his insights regarding Americans and humanity, not his insensitivities to 2018 feminist causes, back in 2009 at the occasion of Hughes’s death:

John Hughes had many brilliant insights: his portrayal of the carnage that modern business travel wreaks in men’s lives in Planes, Trains and Automobiles was by far the best evisceration of what deregulation has wrought, and a powerful comment about the loneliness of the life of the working middle-aged traveling man. His understanding of the mindset of the rich pre-teen child — total paranoia combined with almost Hitlerian fantasies of power and sadism — was made funny in his Home Alone movies. His thought that family is far more of a combined prison and circus than a heaven was brought to hilarious life by his National Lampoon’s Vacation series.

But the insight that will make him immortal came in his teen movies, The Breakfast Club, Pretty in Pink, Sixteen Candles and my favorite, the one that changed my life, Ferris Bueller’s Day Off. This insight was that the modern American white middle class teen combines a Saudi Arabia-sized reservoir of self-obsession and self-pity with a startling gift for exultation and enjoyment of life. No one had ever thought to note that along with James Dean’s sulky self-obsession might also come a shriek of happiness at just being alive. John Hughes — Republican — saw that potential, saw that the individual still had the ability to transcend whatever was weighing him or her down and come out leading a parade down Michigan Avenue.

Like Ringwald, Stein boasts no career in Hollywood, at least no career the public remembers, if not for Hughes. This does not obligate either to perpetually sing the benefactor’s praises. But there’s an indecency to Ringwald calling Hughes indecent. He left us so much to talk about, and yet the actress most talked about alongside him opts to talk about Long Duk Dong, John Bender getting the front row seat so many other ’80s teenage boys wanted most, and whether Farmer Ted date-raped Caroline?

Ringwald, who clearly harbors some affection for the nine-years-dead auteur, actually does something far more offensive than anything in Hughes’s largely family-friendly (The Breakfast Club represents the lone “R” rated film that he directed) movies. It may be (or may not be) too late for her to censor the man who made her in Hollywood. But the chilling effect of her words lets future writers-directors-producers know to write not for themselves or their audience but for Big Sister. She’s watching.