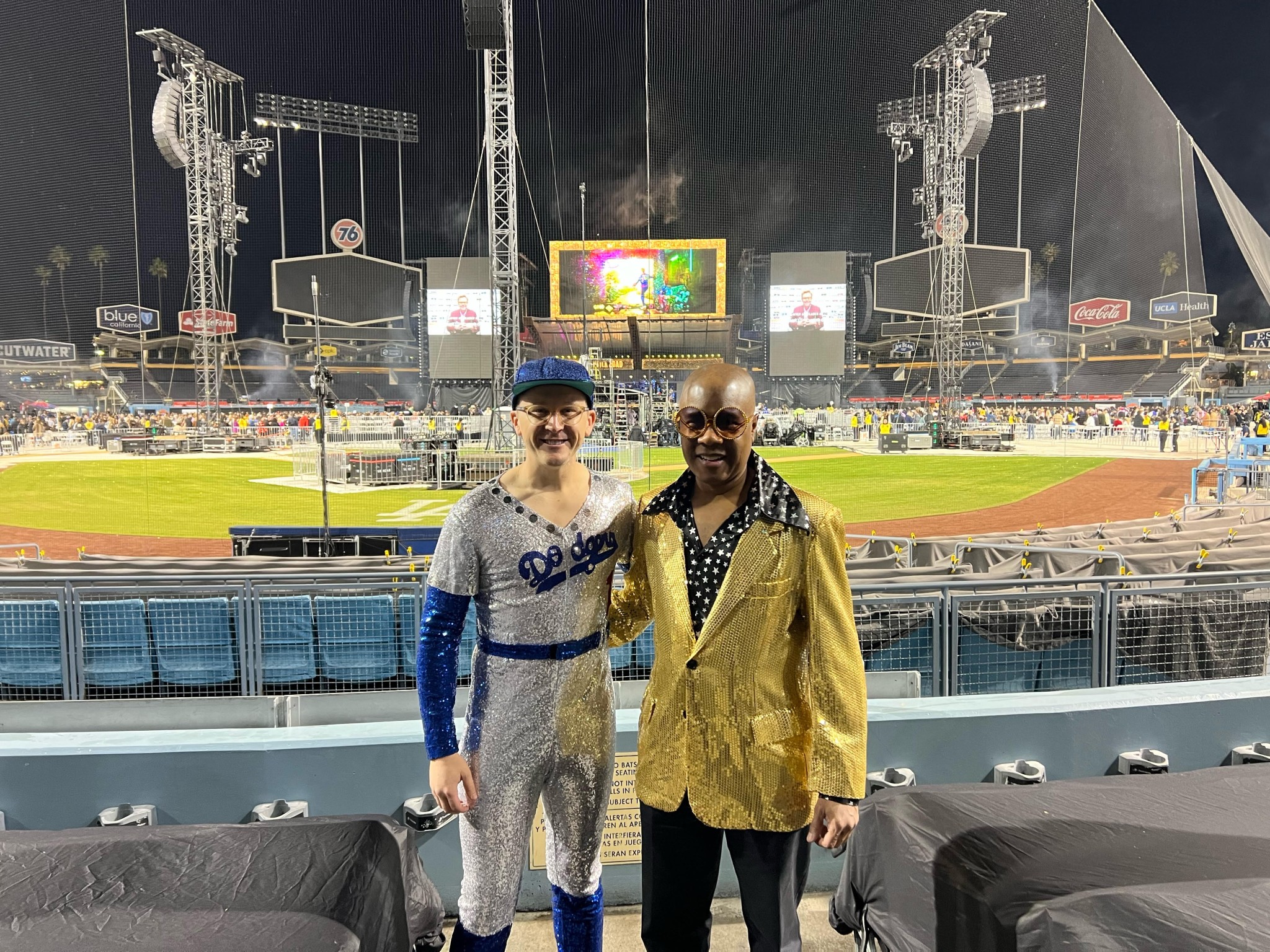 LOS ANGELES — In my religion, last Sunday night was like celebrating Mass with the pope at St. Peter’s Square. I was fortunate and delighted to join some 50,000 congregants of what I call the First Church of Song at Dodger Stadium for Sir Elton John’s final performance in America.

The music deity, age 75, returned to the Los Angeles baseball park where he staged a milestone double-header in the middle of the decade he helped define. The then-28-year-old was on a nonstop tear: He became a ’70s rock pioneer with his very first hit, “Your Song,” in 1970. That Elton and his longtime lyricist and musical partner Bernie Taupin penned a tune of such grace, beauty, and emotional maturity at ages 23 and 20, respectively, remains jaw-dropping.

“Your Song” opened the eponymous Elton John album, his first U.S. release and second album ever. Tumbleweed Connection, Madman Across the Water, Honky Château, and the landmark double LP, Goodbye Yellow Brick Road, followed, in a roaring river of gold and platinum.

By Oct. 25 and 26, 1975, Elton governed rock ’n’ roll’s commanding heights: Captain Fantastic and the Brown Dirt Cowboy and Rock of the Westies both premiered as No. 1 albums — an industry first. Elton’s double-header at Dodger Stadium was yet another stunning achievement.

How appropriate, then, that he picked Chavez Ravine and its 60-year-old hallowed ground as the place to conclude his six decades as a live performer in the USA.

This, his seventh show at Dodger Stadium, 103rd in Los Angeles, and 271st concert of his Farewell Yellow Brick Road tour satisfied high hopes — and how.

“Sad Songs” was anything but, and “Funeral for a Friend/Love Lies Bleeding” was far from funereal.

On a clear, refreshingly cool evening after a searingly sunny day, Sir Elton was in fine voice with maximum manual dexterity on his Yamaha piano. From the single F major 7th chord that unmistakably signaled the start of his 1974 hit “Bennie and the Jets” through ballads, foot stompers, and soul lifters, he kept the capacity crowd on its feet for two and a half hours.

Since this was attendees’ last chance to see the Grammy, Oscar, and Tony winner in America, they observed the bittersweet occasion in sequined jackets, sparkly glasses, and extravagant hats, atop the concert T-shirts that are the main ingredient of live-music merchandise. Quite a few wore shimmering silver baseball uniforms that recalled the beloved outfit that our hero wore on his first at-bat at Dodger Stadium.

The next morning, on a nearby hotel’s public floor, two feathers from a fan’s white boa offered faint but firm proof that Elton John was in town.

“Thank you all for dressing up,” he said. “It makes me so happy when you wear the most fantastic costumes.”

No surprise, the gathered faithful sang along and danced hard to such upbeat classics as “The Bitch Is Back” and “Saturday Night’s Alright for Fighting.”

What was unexpected was how much hip-swaying power this dynamo and his band of stalwarts generated from such usually mellow songs as “Rocket Man” and “Levon.” Both began as lovely, elegant, slow songs, eventually gained momentum, and then blasted into the evening’s most turbocharged showstoppers.

Similarly, “Sad Songs” was anything but, and “Funeral for a Friend/Love Lies Bleeding” was far from funereal.

“Philadelphia Freedom,” “I’m Still Standing,” and “Crocodile Rock” were among the night’s many highlights.

Elton wowed the crowd with several onstage guests. He and Brandi Carlile sang “Don’t Let the Sun Go Down on Me,” and Dua Lipa walked in for a slightly chilly duet of “Cold Heart.” The night’s biggest surprise was Kiki Dee, also 75, who dazzled with a lively reading of her and Elton’s 1976 joint venture, “Don’t Go Breaking My Heart.”

The Rock & Roll Hall of Famer was gracious throughout. He repeatedly paused and credited his musicians, among them percussionist Ray Cooper, guitarist Davey Johnstone, and drummer Nigel Olsson — bandmates since ’73, ’71, and ’69, respectively.

He also thanked Taupin onstage for writing the lyrics for Elton’s tunes since 1967. “If it wasn’t for him, I would not be standing here,” the composer said with the wordsmith at his side. “We still love each other more than we’ve ever done before.”

The man of the hour explained why he finally is winding down his 52 years as a troubadour.

“I want to spend time with my family because I’ll be 76 next year,” he said. “I want to bring them out and show you why I’m retiring.”

Into the spotlight strode his husband, David Furnish, and their two sons, Zachary, 11, and Elijah, 9, clad in twin Dodgers jackets emblazoned with the word “Elton.”

“I became successful first in America,” the legend said from behind his piano. “You bought the singles, and the albums, and the eight-tracks, and cassettes, the CDs. And, more important, you bought the tickets to the shows. What I love, more than anything, is to play live. So, I want to thank you for that, because you made me. Without America, I wouldn’t be here. So, thank you for all the years of love, generosity, and loyalty.”

Just before wrapping a firework-filled finale with “Goodbye Yellow Brick Road,” Sir Elton John urged everyone to “be kind to each other” and then said the word no fan, no matter how grateful, ever wants to hear from a star he worships: “Farewell.”