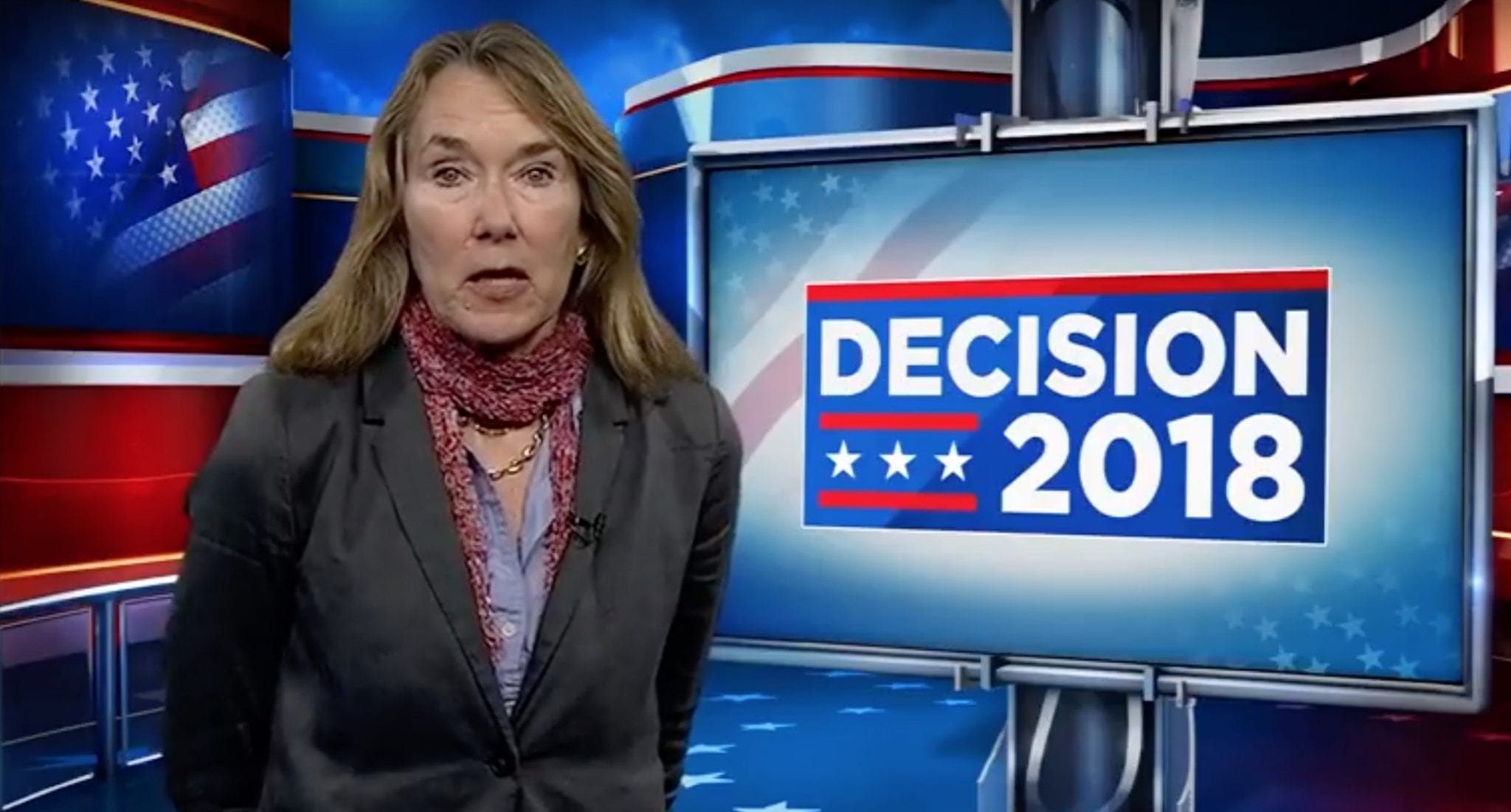 Monday morning, I made the mistake of switching the TV to CNN. As a journalist, sometimes I like to watch CNN just to see what’s happening in that alternative universe where a scion of the Cuomo dynasty is regarded as an impartial arbiter of news. But Monday morning was a bad time to check on CNN, because they were touting a new poll showing Democrat Andrew Gillum leading by 12 points in the Florida gubernatorial campaign.

“Twelve points!” I yelled, jumping off the sofa and heading upstairs to get a cup of coffee, wondering if the world had tilted off its axis overnight, grumbling to myself about this inexplicable poll number. “How the hell could that left-wing bozo be leading by 12 points? Have the people of Florida lost their minds?”

My panic over the Florida governor’s race was eventually resolved. After getting a cup of coffee and checking out Real Clear Politics, I learned that the CNN poll was badly out of line with other recent polls in the state. An examination of CNN’s sample numbers showed a preposterously high percentage of respondents (39%) identified as independent, and when I showed the CNN numbers to a friend in the polling business, he agreed: “No way the independents are that high.”

Still, even if the CNN poll was garbage, Gillum is surprisingly competitive in Florida, running slightly ahead of Republican Ron DeSantis in most polls, and this is cause for concern not only for Florida residents, but for GOP voters nationwide. The Democrats are pouring millions upon millions of dollars into the midterm campaign and, as the situation in Florida shows, Republicans are in the fight of their lives to stop the dreaded “blue wave.” If they can’t beat a clearly unqualified candidate like Gillum — deemed a “flailing flim-flam artist” by my colleague George Neumayr — in a state that Trump won two years ago, Republicans will likely have a long, sad night on Nov. 6.

The GOP majority in the Senate seems safe at this point. If we can trust the polls — an important “if” — Republicans will likely have somewhere in the range of 51 to 56 Senate seats after the votes are counted on Election Day. Even in the Senate, however, Democrats who should be losing badly are still in the game. In Arizona, left-wing extremist Kyrsten Sinema is barely trailing Republican Martha McSally, a heroic Air Force combat pilot. In Missouri, a state Trump won by 18 points two years ago, incumbent Democrat Sen. Claire McCaskill is neck-and-neck with GOP challenger Josh Hawley. If you were looking for evidence of an anti-Trump “blue wave,” these are exactly the kind of indicators you would notice. By all normal political logic, McCaskill should be losing badly, and Sinema shouldn’t even be competitive. Like the surprisingly strong numbers for Gillum in Florida, these polls reflect either (a) the vast money advantage enjoyed by Democrat campaigns or (b) a general anti-Republican sentiment in the electorate. Or maybe it’s (c) media bias.

How can it be that the Trump administration has produced an unprecedented economic boom, and yet Republicans are struggling to win in states that went solidly for Trump two years ago? Well, before voters can endorse Trump’s economic successes, they first must be aware of them, and the news media have done their best to ignore the good news. During a four-month period, from June through September, the three major broadcast network nightly news programs devoted less than 1% of their coverage to the Trump administration’s economic policy, according to an analysis by Rich Noyes of the Media Research Center. “Over the summer, the broadcast networks have continued to pound Donald Trump and his team with the most hostile coverage of a President in TV news history — 92 percent negative, vs. just eight percent positive,” Noyes reported. The nightly news programs on NBC, ABC, and CBS produced more than 900 minutes of coverage of Trump on three issues (Russian “collusion,” immigration, and the Kavanaugh nomination) and on all of those topics, the coverage was more than 80% anti-Trump. Economic policy? A mere 14 minutes on the Big Three network news programs during those four months. Unless you were watching Fox News, you might think the Trump presidency has been a disaster, instead of what it actually is, a resounding success with record-low unemployment.

With the anti-Trump media’s assistance, Democrats are far more competitive in this year’s midterm elections than they would otherwise be. It’s a miracle that Republicans have any hope at all to hold onto their House majority, and the GOP keeps running around like a park ranger chasing an arsonist through a forest, trying to extinguish political wildfires in congressional districts all over the country. Consider the situation in Virginia’s 5th District. This is a largely rural district west of Richmond that Trump won by an 11-point margin two years ago, and it’s been controlled by Republicans since 2010. However, in May of this year, the GOP incumbent Tom Garrett announced he would not seek re-election, citing his struggles with alcoholism, and Republicans scrambled to replace him, choosing Denver Riggleman on the fourth ballot of a district party meeting. Riggleman is an Air Force veteran and successful businessman with a libertarian streak who, in any normal year, might be reckoned a shoo-in for election, especially considering what an extremist his Democrat opponent is. Leslie Cockburn is a liberal journalist who married into a family of left-wingers. How far left are the Cockburns? Well, her late father-in-law was denounced as a Stalinist stooge by George Orwell. Leslie Cockburn’s own opinions are certainly controversial. She co-wrote a 1991 book with her husband that Noah Phillips of the Daily Caller described as “conspiratorial, making unsubstantiated claims against the Jewish Diaspora, Israeli democracy and the United States”:

In the book, Cockburn claims that Israel perpetrated the Gulf War, clandestinely collaborating with a Colombian drug cartel, and worked with South Africa on nuclear missiles, to name a few of the absurdities presented as fact. The book is replete with reference to Israel as having a significant amount of the world’s nations in the palm of its hand, invoking the age-old anti-Semitic trope that Jews “run the world.”

In a 1991 review of the book, the New York Times stated it was dedicated to “Israel bashing for its own sake,” and that its message was that Israelis “are a menace” who are responsible for “everything that ails us.”

Cockburn is as anti-American as she is anti-Israel, but Democrats cried foul when Republicans made an issue of her policy views. Responding to critics, Virginia GOP executive director John Findlay refused to apologize: “She called ICE agents the Gestapo. She insulted our veterans. She blames American foreign policy for everything that’s wrong in the world. What more do we need — a tape of her saying she hates apple pie?”

Despite the Democrat’s extremist views, and despite the strong Republican advantage in rural Virginia, a New York Times poll released Tuesday claimed that Cockburn is leading Riggleman, 46 to 45 percent. Of course, this poll may be as skewed as CNN’s Florida poll, but still, how could this election even be close in a district Trump won by a double-digit margin? And it’s not just one district. Republicans are battling for their political lives in House races all over the country.

The latest Real Clear Politics estimate shows 205 House seats counted either “safe,” “likely,” or “leans” for Democrats compared to 200 seats for the GOP. That leaves 30 “toss-up seats likely to decide the balance of power in Congress. The magic number necessary to win the majority is 218, which means Democrats can probably put the House Speaker’s gavel in Nancy Pelosi’s hand by winning just 43% of the “toss-up” seats, whereas Republicans must win 57% of those. What’s stunning is how many of these “toss-up” districts Trump won easily two years ago. In North Carolina’s 13th District, which Trump carried by nearly 10 points, polls show Republican Rep. Ted Budd in a dead heat with a liberal Democrat challenger, Kathy Manning. Florida’s 15th District, which Trump won by 10 points, is also considered a “toss-up” with Republican Ross Spano fighting Democrat Kristen Carlson to fill the House seat vacated by the retirement of GOP Rep. Dennis Ross. In Kentucky’s 6th District, where Trump won by 15 points, Republican Rep. Andy Barr is barely holding his own against Democrat challenger Amy McGrath. Considering that McGrath is a radical feminist who supports a far-left agenda of open borders, socialized medicine, and late-term abortion, how is this race in rural Kentucky even competitive, much less a neck-and-neck “toss-up”? Well, Democrats have poured more than $7 million into her campaign, and that kind of money can buy a lot of TV ads.

There are plenty of districts like that for Republicans to worry about during these final few days of the campaign season. What’s frightening is that the Democrat candidates in nearly all these competitive races are extremists who pretend to be “moderates” concerned about “working families.” This means that if Democrats win on Nov. 6, the next Congress will be even more radical than it was the last time Nancy Pelosi was House Speaker. Do Americans really want to go back to that? Are people in Florida crazy enough to elect Andrew Gillum governor? Will Arizona really elect someone like Kyrsten Sinema to the Senate?

The worst-case scenario is very bleak indeed. Imagine how the CNN anchors will be gloating and high-fiving each other on Election Night if Democrats do get that “blue wave” they expect. The only hope to prevent this disaster are the more than 62 million Americans who voted for Trump. If they show up to vote in the midterms the way they voted two years ago, Trump voters can save America. Otherwise, I’m going to have to start drinking something stronger than coffee to be able to cope with the news.