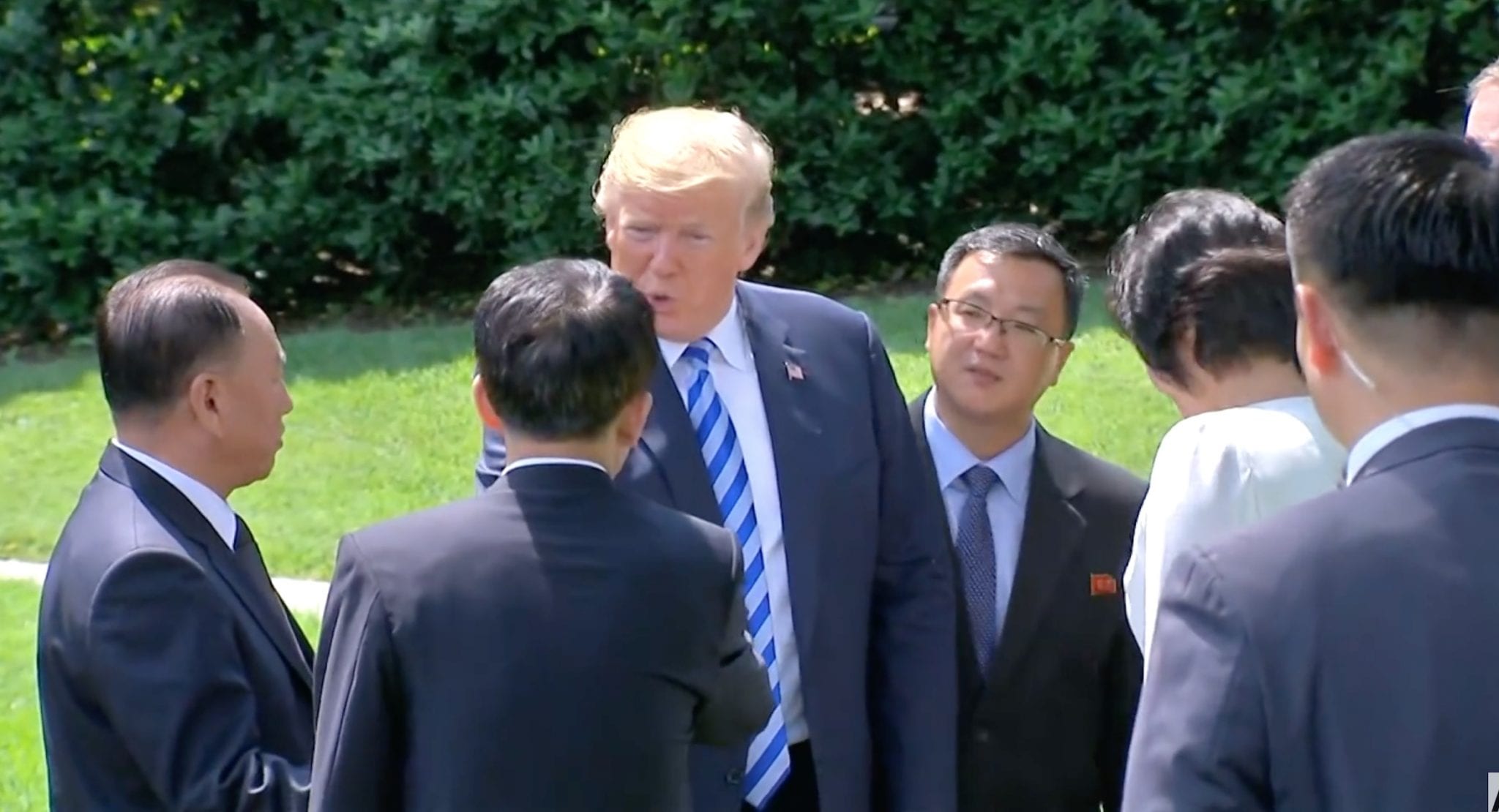 One week from tomorrow, President Trump and North Korean dictator Kim Jong Un are scheduled to meet in Singapore to discuss whether and how North Korea will be disarmed of nuclear weapons. The operative term is “scheduled,” because even at this late date, while staffers are scrambling to put the summit meeting together, it could again be delayed or canceled.

The North Koreans claim they can’t afford the pricey accommodations chosen for the summit, an island resort off the coast of Singapore at which the presidential suite reportedly costs $6,000 per night. We can’t pay for the Norks’ rooms because that would violate our own sanctions against paying money to benefit the Kim regime.

The other stumbling block could be another round of threats from the North Koreans. The last one resulted in the president canceling the summit.

Trump did that on May 24, after North Korea yet again threatened us with a nuclear showdown. South Korean President Moon Jae-in and Japanese Prime Minister Shinzo Abe were taken by surprise by Trump’s cancellation of the summit, as they were by Trump’s original acceptance of Kim’s invitation to talk.

After the cancellation, pundits were quick to announce the end of American diplomacy. Not so fast, boys and girls.

On Friday, after receiving a letter from Kim, hand-delivered by Kim’s second in command, Kim Yong-chol, the president announced that the summit was back on track and still scheduled for June 12 in Singapore. But if the Norks throw another round of threats at us, Trump would be wise to cancel the meeting again, leaving open the possibility of rescheduling it as he did on May 24.

Trump was quick to cool expectations, saying that the June 12 meeting was only a first step and that further meetings would probably be needed to settle any of the most basic issues such as an end to the Korean War. The armistice that ended the fighting in that war was signed 65 years ago and no peace treaty has yet been signed.

The only result of the meeting that would benefit us and our allies is a definite schedule to provide for the nuclear and ICBM disarmament of North Korea and the verification of those actions. As I’ve written before, to do that, Trump will have to modify President Reagan’s aphorism about our relationship to the Soviet Union, “trust, but verify” to “don’t trust, just verify.” There is no point to any deal, far less one that grants any concession to North Korea, that doesn’t do precisely that.

To best understand what may come of the meeting, we have to think, at least briefly, about the other players who — present or not — significantly affect what takes place.

On our side the president and his principal advisors, National Security Adviser John Bolton and Secretary of State Mike Pompeo, each bring their own expertise and egos to the table. Both Bolton and Pompeo apparently are trusted by the president to guide him in the summit.

Bolton, known to many of us as a solid conservative hawk, is an experienced arms controller and someone who won’t be easily taken in by North Korean nostrums. He is being portrayed by the anti-Trump European press as something short of a madman who, in the words of theEconomist, is “A warmonger and bully… disdainful of the bipartisan foreign-policy world and the governing institutions its members cycle in and out of. That he oversees one of them is typical of the plate-smashing Trump administration.”

Those critics, such as the Economist and most of the U.S. media, fear Bolton’s influence because he will — in all probability — prevent the president from making a bad deal such as the 1994 Clinton “Agreed Framework,” which did absolutely nothing to stop or even slow North Korea’s development of nuclear weapons.

Pompeo’s record, as a congressman and as Trump’s first CIA director, is almost as solid as Bolton’s. Together, they may have a decisive influence on the result of the meeting.

Bolton’s action in raising Libya’s nuclear disarmament as a model for North Korea showed where he’d like the summit to go. When, in late 2003, Libya’s Muammar Gaddafi announced the surrender of his nuclear capacity to the U.S., he feared what had just happened to Iraq’s Saddam Hussein. A deal was made to relieve Libya of sanctions and his nuclear disarmament was completed by literally sending the materials to the U.S.

That was supposed to mean peace for Gaddafi, but Obama’s decision to join France in a NATO campaign to oust Gaddafi, which ended in the death of the dictator, created Kim’s existential fear that the same would happen to him.

President Trump’s desire for a deal may overwhelm his better judgment. In the past week, he has intimated that some sort of graduated schedule — granting relief from sanctions as nuclear weapons are dismantled — is the opposite of the “don’t trust, just verify” strategy that is essential to the North Korean situation.

Will Bolton and Pompeo prevent that sort of deal? Maybe. If Trump falls into the “graduated” approach trap, it may result in a deal no better than the Clinton deal of 1994.

After Trump’s first cancellation of the summit, South Korean President Moon Jae-in rushed to the White House to try to revive it. Moon also met with Kim to reaffirm their earlier agreement to denuclearize the Korean Peninsula.

Understandably, Moon desires a Trump-Kim deal, almost any deal, that will appear to reduce the threat to his nation. Late last month, when he was asked whether Kim would agree to a complete, verifiable, and irreversible nuclear disarmament, Moon artfully dodged the question. He will push Trump to take a deal, any deal, whether or not it accomplishes North Korean disarmament.

Abe will be in Washington this week to talk to the president. Abe’s advisers have met with Bolton, so Abe probably knows the hardline approach Bolton favors. Abe will advise Trump to be cautious and — possibly too generous — in dealing with Kim.

Chinese President Xi Jinping won’t be there, but his presence will be felt. Xi has called Kim to Beijing twice to dictate to him the permissible parts of any deal. Kim — already set to cheat on any deal that is made — will almost certainly follow Xi’s diktats.

Xi has praised Russia for its role in setting up the summit. Russian Foreign Minister Sergei Lavrov met with Kim on Friday at roughly the same time that Trump revived the summit. What the two discussed is unknown, but Lavrov almost certainly told Kim that Russia would help North Korea to both survive American sanctions and avoid real nuclear disarmament. And then there is Kim himself.

The North Korean dictator is infatuated with his nuclear weapons and missiles. The memory of Gaddafi’s death resonates with him as nothing else could, ensuring that whatever the result of the summit with Trump may be, Kim will not disarm his nuclear weapons or his missile capability to deliver them. Kim and his regime have brainwashed themselves to believe that their ideology — “Juche” — and their nuclear weapons make them invulnerable to anything short of another Korean War.

Faced with such an adversary, Trump was wise to rein in the expectations for the summit. As he said, this will only be the first meeting and it may take several more to make real progress.

Trump would do well to study the October 1986 summit in Reykjavik, Iceland, between President Reagan and Soviet Premier Mikhail Gorbachev. When Reagan thought he had a deal limiting nuclear weapons, Gorbachev suddenly insisted that Reagan’s development of ballistic missile defenses be limited to laboratory experiments. Reagan walked out, leaving Gorbachev shocked.

We already have several Theater High-Altitude Air Defense (THAAD) batteries in South Korea and more should be deployed soon. Japan has Patriot missile defense systems and should also have THAAD batteries.

Kim will likely demand that the missile defense systems in South Korea and Japan be removed. If he does, or if he tries to limit our nuclear options on or near the Korean Peninsula, Trump should walk out of the summit and leave open the possibility of new negotiations that don’t affect our defensive capabilities at home, in Japan, or South Korea.

North Korea won’t give up its nuclear weapons or the missiles that can deliver them. If it agrees to any level of disarmament, Trump can only agree if there are agreed means to verify what is being done. We can’t trust the Norks, but trust can be built. The strategy of “don’t trust, just verify” should be Trump’s guiding principle in every negotiation with North Korea.