People read into an eclipse what they will. In Washington, at least in the precincts of the Washington Post online, you learn, breast beatingly, “For a few minutes, America was able to look up and forget.”

And more. This is still from the headline on the home page: “It was the first in a century to cross the continental United States, coast to coast, and the first since the republic’s foundation that it passed directly over only this country. It feels — at a time of political division and upheaval — like a personally addressed note from the universe.”

As always, oversold. I went out to the nearest perch near my house and the photos here are what I saw. 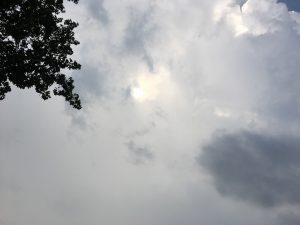 A passing summer storm eclipsed the 81 percent of the eclipse we were supposed to see in my part of Fairfax County, and there was no sense of political division or upheaval or a universe trying to send us a message, presumably Trump or race-related.

Better luck next time, if we survive that long.

Wlady Pleszczynski
Follow Their Stories:
View More
Wlady Pleszczynski is Executive Editor of The American Spectator.
Most Popular
1
Hither and Yon
Addition by Subtraction at Fox News
by Scott McKay