This Earth Day is different. Something BIG is changing fast… and not just the climate.

To everyone’s surprise, the war on climate change just morphed into what looks like an accidental free market triumph. Clean tech wind and solar energy entrepreneurs are kicking ass way beyond anyone’s wildest expectations, even in unsubsidized markets. Production costs are dropping so fast that reportedly, in 2015, the best executed utility scale wind and solar projects became (without subsidies) cheaper than gas or coal.

And this despite a massive drop in fossil fuel prices.

Through the magic of capitalism, technology innovation is on course to reduce, dramatically, your — and everybody’s — energy costs while at the same time reducing emissions that some credible evidence indicates may be bad for the environment. Next step: cutting some tax rates can accelerate these benefits in ways both conservatives and progressives can embrace enthusiastically, conserving their high-octane vitriol for other fights.

Consider the facts. According to a November 2015 study by investment banking firm Lazard, unsubsidized wind and utility-scale solar are now producing energy for a lower cost than natural gas, coal, or nuclear. Unsubsidized. For the lowest cost projects, $32/MWh for wind, $50/MWh for utility scale solar photovoltaics (PV), versus $52/MWh for gas combined cycle plants, $65/MWh for coal, $97/MWh for nuclear.

Here is the Lazard’s Levelized Cost of Electricity for all sources: 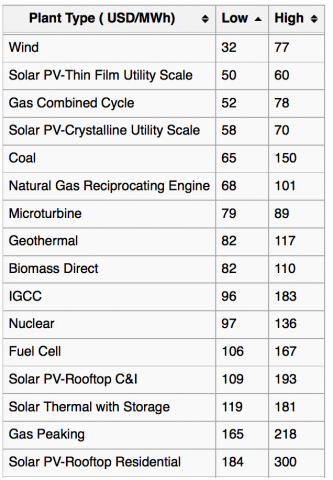 In February, FirstSolar CEO Jim Hughes confirmed the solar numbers: “At the end of 2015, the unsubsidized Levelized Cost of Electricity (LCOE) of utility-scale thin film solar stood in the range of $0.05 to $0.06 per kilowatt-hour…” Then this month, in a highly competitive energy auction, Mexico just awarded 1,860 MW in 11 solar PV contracts, at an average price of $50.7/MWh, unsubsidized, with the largest contract for Enel priced at a stunning $35.44/MWh.
If these numbers and Lazard’s are correct, the best sited utility solar and wind projects beat the competition right now, on price alone, without subsidies, and very likely with profit.*

More importantly, the rapid rate of cost reductions makes it likely that, whether or not profitability is here today, it is certainly coming soon, as is cheaper energy for everyone. We’re getting there fast and it would be of real and legitimate value, both to the economy and the ecology, to accelerate the process. Rapid cost reduction and incipient unsubsidized profitability changes everything. It opens up new and better policy options, notably the use of tax rate cuts to accelerate innovation, investment and deployment. It is now possible to glimpse a future where capitalism (using the traditional simple tax rate cuts capitalists favor) saves the planet.

It wasn’t supposed to be this way. First, we were warned that we must accept a regimen of carbon taxes, subsidies and regulation, or face catastrophe as we cross the 2ºC tipping point. And then we were told, au contraire, that the first warning was really just a vast left-wing conspiracy to destroy liberty and prosperity and bring about the tyranny of socialism, that there simply is no economically viable alternative to fossil fuels. All very depressing.

But as wind and solar now cross the tipping point of unsubsidized low-cost leadership and profitability, it seems that, suddenly, both alarmist and denier narratives — which may each have had a ring of partial truth at one point — are now both fundamentally wrong, overrun by new facts on the ground. From here forward, left-wing climate policies will neither offer the only way to save the day nor destroy liberty and prosperity. Instead, disruptive market forces make the classic free market policy option of tax rate cuts newly relevant, and together offer a better way to accelerate innovation, reduce emissions, and create wealth.

Make no mistake, the power and speed of the market disruption has caught everyone by surprise. Since 2009, energy prices have dropped 82% for utility-scale solar PV, and 61% for wind power. Solar is dropping faster than anything else. Since 1977, solar PV prices have dropped 99.6% (!) from $76.67/W to $.30/W in 2015. Industry analysts have dubbed this solar cost reduction trend Swanson’s Law, a rule-of-thumb similar to Moore’s Law, that estimates that solar cell prices fall 20% for every doubling of industry capacity. Swanson’s Law may even understate the actual trend, which has blown past nearly every forecast. 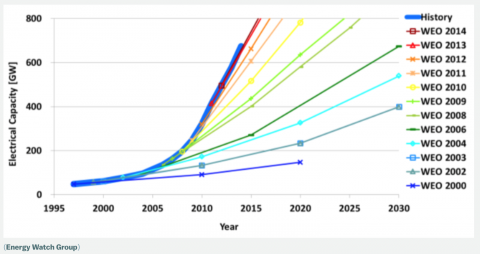 In fact, the solar PV industry has doubled in size seven times since 2000, while wind has doubled four times in the same 15-year period. 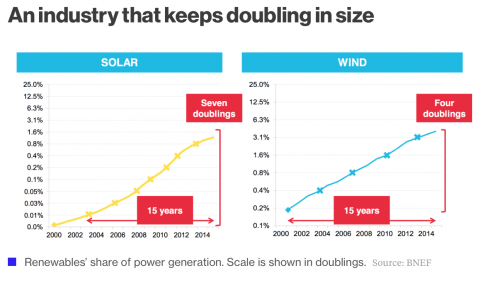 And this is only the beginning. Wind and solar are technologies, and tech prices tend to decline predictably. Coal and gas are commodities, and commodities tend to go up and down, less predictably. Now that both wind and solar have crossed at least the threshold of unsubsidized profitability, with costs lower and declining faster and more predictably than fossil fuels, renewable market growth is only going to accelerate.

It is stunning how wind and solar have outperformed the forecasts even of their climate champions, with less government intervention than demanded, and even in unsubsidized markets. But the real jaw-dropping shocker is how wildly wrong some fossil fuel advocates remain about the true free market potential of renewables, even now, while posing as free market champions. The view that wind and solar will never compete unsubsidized might have seemed reasonable in 2008. In 2016, it is time to get out of the time warp, and start catching up on last year’s market reports.

Truth be told, it is high time both sides reconsider their analysis and policy options. Low cost leadership and incipient unsubsidized profitability open up new policy options. Mandates and subsidies, which were useful to support beneficial but unprofitable enterprises, are no longer strictly necessary, or necessarily the best policies to use. Or particularly good for the industry. They are merely icing on the cake, a crutch which probably helps the industry laggards more than the leaders.

We are on a tipping point. What should our policy be in the fast approaching world of profitable wind and solar, promising but still bounded by familiar fears of both climate disaster and socialist tyranny? Stay tuned for Part II!

*Notes of caution: (1) The Lazard study is the most recent major LCOE study, and the first to show big solar with a lower levelized cost than gas or coal as of 2015. While these results are consistent with declining costs shown in earlier LCOE studies and recent market data, they have not yet been confirmed by other yet-to-be-published studies. (2) Levelized cost is breakeven price. So if low cost producers can sell above their breakeven price, that implies profitability. This is not to say that every utility scale wind and solar project is profitable. Certainly not if badly sited. But it does imply the best sited projects could be profitable, unsubsidized, right now. (3) This article does not address roof-top solar, storage and transmission. (4) Full credit to Ralph Benko for first use of “kick ass” in relation to innovation acceleration. (5) Many of my best friends are either climate alarmists or deniers. I love them all but wish they would just chill.

The American Spectator is proud to present this first installment of our new column, The Free Market Optimist, exploring new free market policy ideas that can save the world and beat back the socialist menace, all at a profit. Free Market Optimist Rod Richardson serves as President of the Grace Richardson Fund, a private foundation pioneering new free market policy solutions to pressing local, national and international problems.