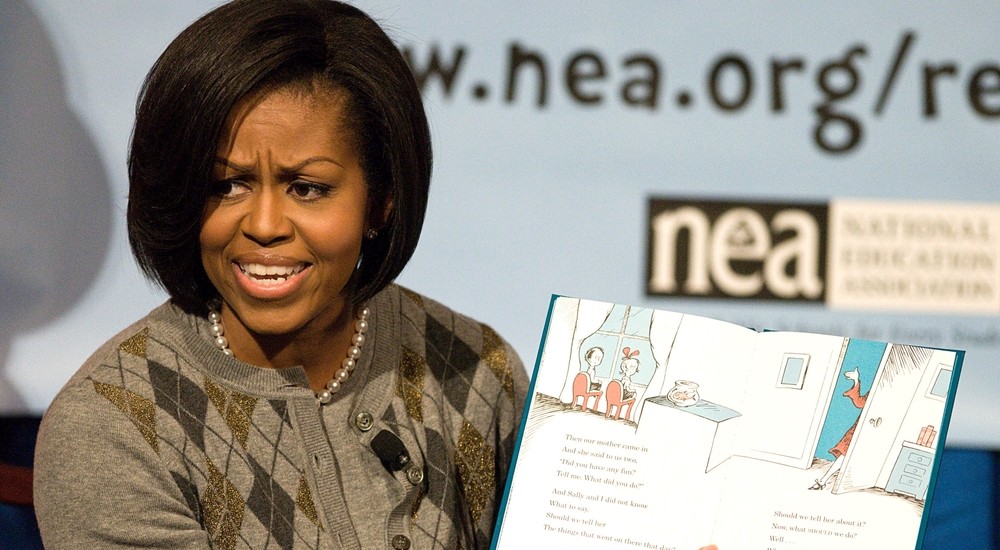 Welp, they’ve started canceling Dr. Seuss, and on his birthday, no less. And to think it could happen to Mulberry Street!

March 2, Dr. Seuss’s birthday, is National Read Across America Day (#DrSeussDay across social media). It’s an annual event by the National Education Association (NEA) encouraging reading among school-aged children. Yet this is the moment that the NEA, along with the White House, has chosen to break from tradition.

What’s worse, Dr. Seuss Enterprises, the organization in charge of the late famous author’s estate, announced they’d be discontinuing six of his books because of the “hurtful” stereotypes they contain. Among the condemned books is one many, myself included, consider to be a classic. And to Think That I Saw It on Mulberry Street is the tale of a young boy’s daydream on his walk home from school. At its heart, the picture book is a delightful exhibition of the difference between reality and imagination and the importance of both. But Dr. Seuss Enterprises doesn’t care about that. All they can see is the caricature of the “Chinaman” seen on page 26 wearing a vaguely Chinese hat and holding a bowl and chopsticks.

Evidently, insinuating Chinese people look a certain way and have historically eaten with different utensils is racist, never mind that it’s true. Regardless of how offensive or inoffensive people find the sketch, Dr. Seuss Enterprises is doing children everywhere a disservice by judging this book based on anything besides its literary merit. A close look at the book reveals a poignant message about the magic of imagination and the challenge of growing up, one that’s particularly relevant to kids living in a world dominated by lockdowns and pandemic disruptions.

At the beginning of the book, the main character introduces the reader to his predicament. His father has presented him with a task:

When I leave home to walk to school,

Dad always says to me,
“Marco, keep your eyelids up
And see what you can see.”
But when I tell him where I’ve been
And what I think I’ve seen,
He looks at me and sternly says,
“Your eyesight’s much too keen.
Stop telling such outlandish tales.
Stop turning minnows into whales.”
Now, what can I say when I get home today?

Marco is to “keep his eyelids up” — to stay awake, in other words. He is to be perceptive and to “see what he can see,” but to do so without embellishment — no “turning minnows into whales.” As he starts his walk home, the difficulty of the task becomes clear:

All the long way to school
And all the way back,
I’ve looked and I’ve looked
And I’ve kept careful track.
But all that I’ve noticed,
Except my own feet
Was a horse and a wagon on Mulberry Street.
That’s nothing to tell of,
That won’t do, of course.

It’s not for lack of trying, but all Marco sees is a plain cart and horse — the banality of the mundane. What’s worse, he’s almost home. How can he face his father with so little to report?

And here the fun begins — for Marco and the reader. In an effort to jazz up what he’s seen and give his father something to marvel at, Marco starts to embellish his surroundings. The plain horse becomes a zebra, which requires a charioteer in place of the plain cart driver. Quickly, Marco decides the zebra’s too small, and that a reindeer would be much better, and, of course, a reindeer would really be more comfortable drawing a sleigh … and so on and so forth.

By the end, the plain cart and horse has morphed into a trio of safari animals pulling a brass band at top speed through thick traffic at the corner of Bliss and Mulberry as the mayor himself waves his hat and an airplane dumps confetti on it all. And yes, you’ll have to forgive the doctor, because there’s a “Chinaman” eating with chopsticks too, in company with “a big Magician doing tricks,” and “a ten foot beard that needs a comb” — all examples of things that seem exotic to some children. Insensitive? Maybe. Or maybe Seuss was just aware that children are fascinated by people who dress and act differently than those Marco likely saw every day on Mulberry Street. Regardless, the ethnic caricature is hardly the focal point.

Emboldened at the thought of his story, a scoop that no one else could get, Marco rushes home. His ecstasy is emphasized in all caps:

I swung ’round the corner and dashed through the gate,
I ran up the steps and I felt simply GREAT!
For I had a story that NO ONE could beat!
And to think that I saw it on Mulberry Street!

But Marco’s excitement doesn’t last. Assailed by the sharp look and stern frown of his father, Marco wilts under questioning and tells the plain truth:

Dad looked at me sharply and pulled at his chin.
He frowned at me sternly from there in his seat,
“Was there nothing to look at … No people to greet?
Did nothing excite you or make your heart beat?”
“Nothing,” I said, growing red as a beet,
“But a plain horse and wagon on Mulberry Street.”

Marco’s embarrassed, and rightly so. To report fiction as fact, as he nearly did, would have been a shameful mistake.

Still, ever since I was a kid, I’ve always felt bad for Marco. And sorry to disappoint, but it had nothing to do with his depiction of the Chinaman.

On the surface, the book seems a simple invective against lying. But the more I’ve thought about it over the years, the more I’m sure that it’s not so simple, and that Marco is playing a rigged game. His father expects him to bring home something good, but he won’t accept what his son has to offer: A plain cart and horse is nothing to “make your heart beat,” but the vibrant, chest-thumping scene that Marco has conjured out of thin air is off limits. No matter what he reports, he loses either way.

That’s what growing up is like. One of the great difficulties of life, as all children learn too soon, is managing the expectations of those around you. People expect you to be real, but better and more interesting than you actually are. Who can fault the world weary schoolboy for fleeing to his imagination for relief?

The only consolation for Marco is that we the readers get to see him at his best, turning horse-drawn carts into traffic-stopping parades. And in the end, he’s right: That is a story worth reading.

Today, with COVID schooling, kids are confined to their living rooms for months on end, set down in front of computer screens, and told to pay attention. It’s a shame to take Marco’s example away from them.

Instead of erasing art, Dr. Seuss Enterprises could follow Disney’s lead on The Jungle Book and simply run a disclaimer noting that times have changed and warning viewers of content they may find offensive.

Aaron Andrews is an associate editor at Young Voices. He’ll be a father for the first time this summer, God willing. He plans to read Dr. Seuss to his son on a regular basis.