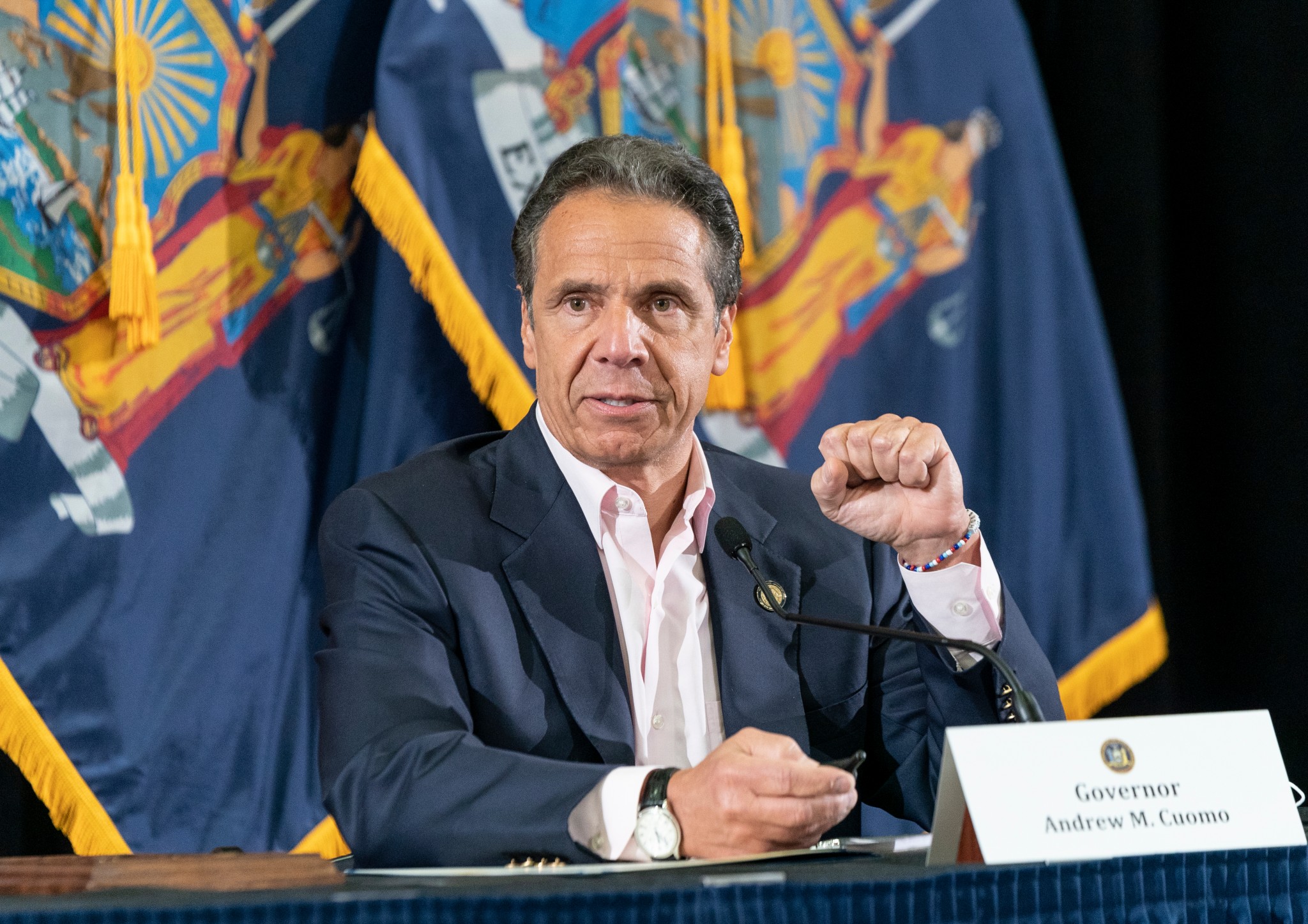 On August 3, 2021, New York Attorney General Letitia James released her office’s 165-page report of its investigation into allegations of sexual harassment by Gov. Andrew Cuomo. The report was the work product of “independent investigators” who found, among other things, that Cuomo had sexually harassed at least 11 women.

Cuomo immediately live-streamed a video response and released his attorney’s 85-page rebuttal of the report.

In his video address, Cuomo denied the allegations.

“I never touched anyone inappropriately or made inappropriate sexual advances,” Cuomo said. “I am 63 years old. I’ve lived my entire adult life in public view. That is just not who I am. And that’s not who I have ever been.”

Referencing his lawyer’s written rebuttal, Cuomo said, “The facts are much different than what has been portrayed. Read the facts and decide for yourself.”

In regard to an allegation that he had groped a woman whom he had summoned to the governor’s mansion, Cuomo said, “That never happened.”

As for the claim that his “inappropriate” behavior had made some women uncomfortable, Cuomo insisted that they had misapprehended his actions which were “meant to convey warmth, nothing more.”

“For that, I apologize,” said Cuomo. “I now understand that there are generational or cultural perspectives that frankly I hadn’t fully appreciated, and I have learned from this.”

Nevertheless, Cuomo stated that “politics and bias are interwoven throughout every aspect of this investigation.”

[Author’s note: For a lengthy but fascinating analysis of Cuomo’s televised address by body language experts, click on this link to The Behavior Panel’s YouTube channel.]

The political fallout was swift and severe. It seemed that the corporate media and New York’s Democrat establishment had turned solidly against Cuomo who once had been praised for his handling of the coronavirus pandemic and touted as a leading contender for his party’s presidential nomination in 2024.

After live-streaming his response, Cuomo took no questions from reporters and went into seclusion to weigh his options. There had already been scattered bipartisan calls for him to resign and talk of an impeachment inquiry based on allegations that his administration had vastly under reported the number of COVID-19 deaths among nursing home residents. The attorney general’s report had only added an additional ground for removal and fuel to the fire.

Should he stay in office and fight or should he resign?

On August 10, 2021, in a televised non-apology apology, Cuomo tendered his resignation. He claimed that he did so in order to spare the citizens and taxpayers of New York the costs and distractions of impeachment, to wit.

Of course, no one with an IQ above that of a celery stalk believes this bilge. So, really, why did he quit?

Let’s take a close look at the damning facts that he would have faced in an impeachment proceeding.

On March 25, 2020, the New York State Department of Health issued a directive prohibiting the state’s nursing homes from denying admission or re-admission of residents “solely based on a confirmed or suspected diagnosis of COVID-19.” The nursing homes were also “prohibited from requiring a hospitalized resident who is determined medically stable to be tested for COVID-19 prior to admission or readmission.”

The stated purpose for this order was to prevent hospitals from being overwhelmed by COVID-19 patients.

Meanwhile, to the near universal acclaim of the corporate media, Cuomo was conducting daily televised briefings on his administration’s handling of the pandemic. He was hailed as an inspiring leader who “followed the science” in crafting the state’s response to COVID-19.

Nevertheless, despite Cuomo’s purportedly expert leadership, the pandemic death toll started to rapidly mount in New York’s nursing homes. Critics cited the directive as a major factor in spreading the virus among the vulnerable sick and elderly nursing home residents.

Nursing home administrators, residents’ advocates and others argued that the order had created a massive problem for extended care facilities which even Cuomo had recognized as “the optimum feeding ground for this virus.”

The son of an 88-year-old nursing home resident who had died of COVID-19 put it this way:

It was the single dumbest decision anyone could make if they wanted to kill people. . . . This isn’t rocket science. We knew the most vulnerable — the elderly and compromised — are in nursing homes and rehab centers.

On May 10, 2020, as the criticism mounted, Cuomo reversed the directive. But, as he did so, he defended the order and claimed that he didn’t believe that it had contributed to deaths in nursing homes and extended care facilities.

On May 22, 2020, the Associated Press reported that pursuant to the directive “[m]ore than 4,500 recovering coronavirus patients were sent to New York’s already vulnerable nursing homes.” The Associated Press had conducted its count after the New York Health Department had declined to release its internal survey of nursing home COVID-19 deaths. This refusal resulted in the Associated Press filing a Freedom of Information Act request seeking disclosure of the Cuomo administration’s data.

On July 6, 2020, the Associated Press reported that New York hospitals had transferred more than 6,300 recovering COVID-19 patients to nursing homes. Nevertheless, the Cuomo administration contended that these admissions were not the cause of the virus spread in those facilities. Instead, it claimed that the virus had been spread by infected nursing home staffers.

Cuomo himself claimed that infected workers had spread the coronavirus through the nursing homes like “fire through dry grass.” He added that criticism of the directive and his handling of the pandemic was part of a political “blame game.”

The book and its author were widely praised by the ever-helpful corporate media. Entertainment Weekly said that Cuomo was “[t]he hero that America never realized it needed until he was on our television screens every night.” Similarly, MSNBC’s Lawrence O’Donnell praised the book as being “unlike anything ever written by a governor before because no one has lived through and managed the crisis that he has.”

In promoting his book, Cuomo claimed that New York’s low nursing home death count compared favorably to the tallies in other states. On CBS’s Morning Show, Cuomo said, “New York, actually, we’re number 46 out of 50 in terms of percentage of deaths in nursing homes . . . it’s not a predominantly New York problem.”

As of January 21, 2021, New York State’s official nursing home COVID-19 death tally was 8,505. But then, one week later, New York’s Attorney General exposed this number as a massive and misleading undercount.

This is what’s known as lying by omission.

Zucker insisted that the admission of COVID-19 patients to nursing homes was “not a significant factor” in causing deaths among residents. But then he astoundingly revealed that, contrary to the state’s previously published tally of approximately 8,500 deaths, 12,743 nursing home residents had died of COVID-19. He explained that this 50 percent increase was due to the inclusion — for the first time — of 3,829 residents who had become infected in a nursing home and later died in a hospital. He also conceded that the death total could rise once the Health Department completed its audit.

In fact, the auditors ultimately determined that the number of deaths were almost 15,000. The Cuomo administration had previously omitted the deaths of approximately 6,500 residents who had become infected in a nursing home and died in a hospital.

After a delay of nine months, on February 21, 2021, the Cuomo administration finally responded to the Associated Press’ Freedom of Information Act request seeking the true number of infected residents who had been sent to nursing homes under the Health Department’s directive. The new data disclosed that 9,056 recovering COVID-19 patients had been transferred from hospitals to hundreds of nursing homes throughout the state. This 40 percent increase sparked renewed demands that the Cuomo administration come clean regarding the true number of nursing home deaths.

The lies were stacked up to the rafters. How could Cuomo hope to explain this tangled, sorry mess?

Now let’s back up. In May 2020, the Trump Justice Department launched an investigation of the nursing home deaths. The investigative predicate was whether or not the Cuomo administration had, in effect, violated the civil rights of the residents of state-run long-term care facilities. But by October 2020, the scope of the investigation had widened.

The DOJ requested data from over 600 public and private nursing homes in the state and detailed information about COVID-19 related deaths in New York hospitals.

True to form, Cuomo condemned the DOJ’s inquiry as “a political investigation started by Donald Trump.” He alleged that Trump had politicized the pandemic policies and tried to blame Democrats for nursing home infections and deaths.

The Cuomo administration was uncooperative and did not produce requested documents and data. Then, after much delay, they relented and reluctantly began turning over the material.

When the Biden regime took charge of the DOJ, the civil rights investigation was terminated. However, the Associated Press reports that, according to anonymous sources, there remains a collateral investigation to determine whether Cuomo and his aides intentionally manipulated data pertaining to nursing home deaths and provided the DOJ with materially false and incomplete information.

If so, those actions would constitute serious federal crimes.

Is a federal investigation underway? Is Cuomo really at risk of being criminally charged?

But that was before the sex scandal transformed Cuomo’s image from the hero of the pandemic into the creepy old Luv Guv who gropes and talks smack to young women. This has made him fair game for prosecutors eager to satisfy the demands for justice — and vengeance — by angry feminists.

That’s why he resigned. Once he announced that he was stepping down, the state Assembly halted its effort to remove him from office. If he hadn’t quit, he would have had to defend himself in an embarrassing and damaging impeachment proceeding which, in addition to the sexual harassment charges, would have dealt with his handling of the nursing home crisis. This would have massively complicated and compromised his defense in any federal or state investigation or prosecution.

By resigning, Cuomo did the smart thing. Free of the threat of impeachment, he can concentrate his resources on dealing with any potential criminal proceedings. Moreover, out of office, he may be able to lower his public profile and become less politically radioactive.

All of which may make him better able to reach an amicable resolution of any difficulties that he may have with the Biden Justice Department.