Recently, a letter came to Dr. Katricia Pierson, president of Eastern Central University in Ada, Oklahoma. Her correspondent was a representative from Americans United for Separation of Church and State (AU). For a college president, a letter with that return address has got to be one of those “Oh, crap. Now what?” moments.

If you’re not familiar with AU, on its website the organization states that its primary mission is grounded in the First Amendment:

Enshrined in the First Amendment to our Constitution, [religious liberty and freedom of conscience] are central to our identity as a free people. Without freedom of religion, we wouldn’t be the nation that we are. At Americans United, we believe these freedoms rest on the wall of separation between church and state. A high and firm barrier between the institutions of religion and government serves as a sturdy platform for those freedoms.

Fair enough. The question is, how would AU like to see that “high and firm barrier” implemented? Specifically, at Eastern Central University.

AU was writing about the university’s Kathryn P. Boswell Memorial Chapel. The chapel has been a campus landmark since its dedication in 1957. There is a cross on top of the steeple (below), and another cross inside the chapel, and you can find Bibles inside, too. Americans United for Separation of Church and State wants them gone. 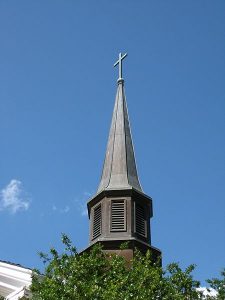 About the Boswell Chapel: it was the gift of S.C. Boswell, a member of the Board of Regents of Oklahoma Colleges, in memory of his late wife. Boswell envisioned the place as a multi-purpose building — a place of worship, a location for weddings, and the setting for campus events which, over the last 60 years, have ranged from fraternity and sorority ceremonies to concerts.

Bill Sherman, a reporter for the Tulsa World, tells us in a June 29 story that after receiving the AU letter, Dr. Pierson and her school’s executive council went into a huddle with the attorney for the Regional University System of Oklahoma. After the meeting. Pierson announced, “We are responding appropriately.” That’s bureaucrat-speak for, “We’re gonna cave.”

And that’s what ECU did.

Pierson did concede that the chapel is not one-denominational, that it is used as a place of worship by all manner of religions, as well as the site for such purely secular events as meetings of on-campus clubs. In a press release, Pierson said, “it is legal for a public university to have a space that can be used by students for religious worship so long as that space is not dedicated solely to that purpose.” The Boswell Chapel clearly falls into that category.

But then we get to the caving-in part of the press release. “It is a violation of the Establishment Clause of the First Amendment to the U.S. Constitution,” Pierson said, “to display religious iconography on government property.” ECU is a public university, which could complicate things, but let’s leave this question to specialists in constitutional law. Then Dr. Pierson added, “We support all cultures and attempt to make them comfortable when they are here.”

I get that. It’s just good manners. But it’s not enough for the folks at AU who, it seems, fear that their freedoms guaranteed by the Bill of Rights are endangered if there is a visible sign of religious faith — any religious faith — on campus.

Bear with me for a moment as I get personal. In my little town in Connecticut, one of my neighbors has Buddhist prayer flags strung between the trees in the front yard. During Hanukkah, my dry cleaner displays an electric menorah, and as each of the eight days of the holiday go by, she screws in another blue light bulb. There’s a family in town that has a statue of the Chinese goddess of mercy on their front lawn, while another family displays a largish statue of Our Lady of Fatima in the picture window. I like all of these displays. They are interesting. Of course, as a Catholic, the prayer flags and the goddess of mercy statue don’t contribute to my religious life, but just because they don’t does not mean that I am offended by them. It is a lexical absurdity to try to make “different” a synonym for “offensive,” much less “unconstitutional.” And that is where AU was going when they demanded that the crosses be taken down at Boswell Chapel and the Bibles banished.

Typically, a tear-down-this-cross story ends here. But on June 30, Carl Lewis, writing in The Ada news, ECU’s hometown newspaper, reported that school administration had slammed on the brakes. “We moved too quickly,” president Pierson said. “This requires a more thoughtful and deliberate approach.” Now Pierson is canvassing students, faculty, staff, and the citizens of Oklahoma for their thoughts on the crosses and Bibles at the chapel. By the time Pierson changed her mind, some of the crosses and Bibles had already been removed from inside the chapel, but the cross on the steeple hadn’t been touched. Until the question is settled, no other items will be removed from the chapel, nor will any items that have been removed be returned.

My hunch is there’s a good chance Americans United for Separation of Church and State and the Freedom From Religion Foundation will lose this fight. When College Fix published a piece on the attacks on Boswell Chapel’s crosses and ECU’s sacred music program, an Oklahoma City DJ named James Edward Smith commented, “Don’t try that mess here in Oklahoma.”

Thomas J. Craughwell is the author of 101 Places to Pray Before You Die: A Roamin’ Catholic’s Guide.