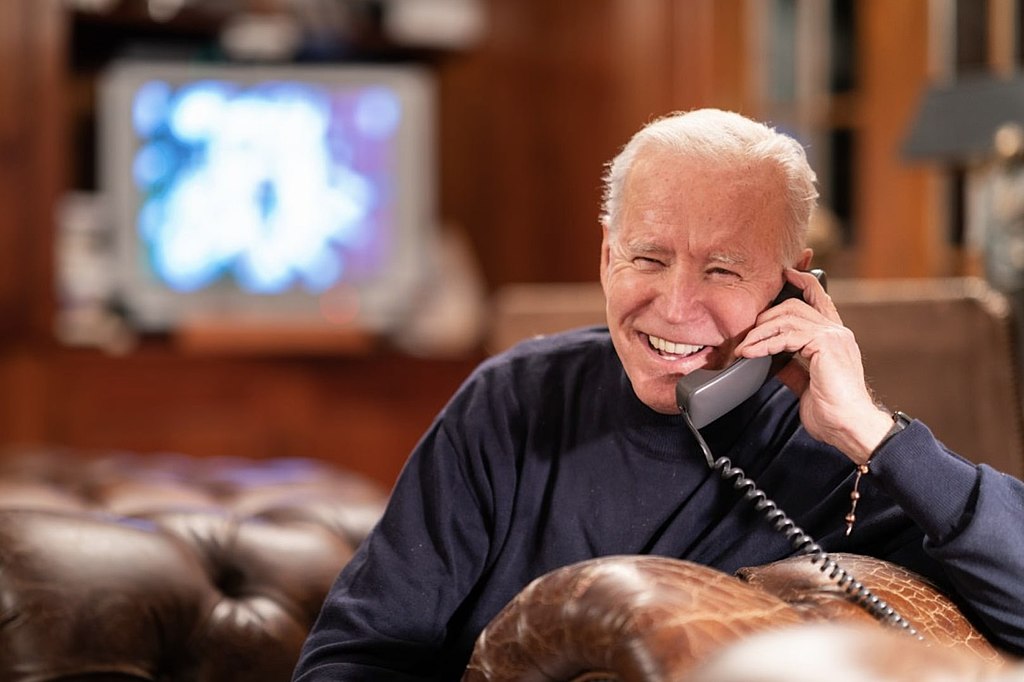 That’s how Perry White, boss at The Daily Planet, where Clark Kent reported and Superman did wardrobe changes, exclaimed bemusement in the 1950s. Today that expression has been replaced by the “WTF” profanity. Thanks to Joe Biden’s recent act of hand-shaking pathos, Ghosts are back in the public discourse.

1. The Left Media Direct the Narrative

We conservatives are at a terrible disadvantage. Our breakthrough reporting and newsworthy exposés routinely are suppressed. Middle America — “Independents” — are kept in the dark as Left media control the narrative. ABC, CBS, NBC, PBS, CNN, MSNBC, the New York Times, theWashington Post, and social media executives decide what Independents read and hear. We cannot break through.

Yes, we have outlets like The American Spectator, National Review, the Federalist, American Greatness, American Thinker, Gateway Pundit, FrontPage, PJ Media, the Daily Wire, the Daily Caller, Glenn Beck’s Blaze, Bill O’Reilly on YouTube, Talk Radio, and such. But our side is a “David” confronting their “Goliath.” Although Fox News substantially outdraws the Leftists on cable, and CNN+ collapsed practically the day it was launched with its $300 million invested build-up micturated down the journalist urinal, when we honestly add together the viewers of all the left-wing TV offerings, they dominate handily over Fox News.

It is overwhelming. They control the narrative.

Hillary Clinton perpetrated federal felonies when she spoliated evidence being investigated by the FBI. Martha Stewart and so many others went to prison for far less. The media chose not to pursue the felony story, providing the Clintons their expected cover. Instead, the Left media generated tempests over pre-candidate Trump making small talk in a trailer, or an obviously fake “dossier” alleging Trump conspiring with Putin — lies generated by Hillary’s Perkins Coie–Fusion GPS aiders and abettors. The Left media quashed all talk of the Hunter Biden laptop and continue to quash talk of the Biden Crime Family while instead promoting Pelosi’s obvious lies characterizing the January 6 D.C. protest as an attempted political “insurrection.” Yes, January 6 got way out of hand. The vast majority properly were there to protest legally the troubling way elections had been conducted. But an insurrection? Where no bullets are fired and people dress like elks? Even the very few convicted have received minor sentences common to acts of public disorder and, in the most severe cases, minor misdemeanors. Thirty days and even five years are not life sentences.

The Left media got exercised over Trump’s cholesterol and at another time when he walked carefully down a slippery descending metal ramp, but they ignore whatever medically is deeply amiss with Biden’s cognition. They generated false narratives that Trump, the best presidential friend American Jews have known, is an anti-Semite despite Ivanka, Jared Kushner, and their kids — his grandchildren — being Orthodox Jews, while ignoring Biden’s lifetime of racist remarks. They picked up on every Trump misstatement while ignoring that Biden is a lifelong public liar down to his own biography. And, oh how they lied about Trump’s words regarding Charlottesville! How they abused his press secretaries!

There are no limits. “Black Lives Matter” is a despicable organization, rooted in racial bigotry and corruption; yet the Left media made them icons worthy of receiving billions in Woke corporate grants, paid mostly as blackmail to divert the Woke from attacking them. Transgenderism is a perversion, a sickness known as gender dysphoria, also allowing certain men to dominate women’s Title IX sports; yet the Left media celebrate them as the Great Civil Rights Cause of our time. While censored conservative media respond “The Emperor Is Naked,” those voices are barred from social media, unable to pierce through.

We all know the power of media to control and corrupt a population. Hitler used Der Stürmer that way. Stalin manipulated with Pravda (“Truth”) and Izvestia (“News”). Putin today controls his population by deciding what “news” they read and what “truth” they hear. The ayatollahs do the same in Iran. Same with Arab Muslim governments. It is amazing that any Republicans ever win any elections anywhere in America.

2. When Democrats, the Woke, and Their Media Overplay Their Hands, We Get Our Opening

Our breakthroughs come when they, absorbed in their hubris, hand opportunities to us. They so over-reached with Christine Perjury Ford that average Americans, wives of men like Brett Kavanaugh and mothers of girls like his young daughters, could not abide it. Despite media manipulation efforts, Americans would not accept Hillary calling them “Deplorables.” Obama could win elections when his name on the ballot attracted extra Black voters, but Democrats got shellacked in each of his off years in 2010, 2014. His endorsements backfired. There never —ever — would have been a President Trump had Americans not endured a wasted Obama–Biden decade.

The Left media actually were very excited — thrilled — by the narrative that Biden and the Democrats were evacuating Afghanistan after Bush Republicans foolishly had embroiled us there. But once the Left media committed, they could not cover up unexpected events that ensued at the airport: the chaos, the botched planning, desperate Afghanis latching onto airplanes’ external handles and then falling from the sky to their deaths, thirteen deaths of our heroic servicemen.

I wrote nearly two years ago that we did not save Afghanistan, but Afghanistan saved us. That disaster finally permeated through the Left media’s protective wall; they no longer could hide our Oval Office Incompetent, nor his cackling numbskull Veep, qualified for the vice presidency only by virtue of her pigment and vagina, ready to assume his role at the first opportunity. That was the breakthrough moment.

That is how it goes. They tried to make a super-hero of Kamala. Instead of reporting on her, Woke “journalists” helped her pick clothes. But once they elevated her, they were stuck with her. On these very pages, I had warned months earlier that she is an absolute zero who rose by circulating as “arm candy” accompanying Powerhouse Willie Brown at California Democrat soirées. He was very married to Blanche, and Kamala played a role no proper woman would play. A bitter Blanche told the media: “Listen, she may have him at the moment, but come inauguration day and he’s up there on the platform being sworn in, I’ll be the b***h holding the Bible.”

Kamala is not “African American” — no African family roots — and is the descendant of slave owners. She launched her presidential bid promoted by a doting Left media, and yet she sputtered as CNN+ would. Nevertheless, once they promoted her, she thereupon became exposed for public view. Soon, she was reading a space-travel book to rented children. Her cackling — often at the most inappropriate moments — would become legend. Her lying about listening to certain hip-hop artists during college before they emerged. Ultimately, the curiosity as to how any professional can have thirteen separate high-ranking staffers quit in only one year, especially when their jobs intimate possible White House service. She never was smart, never was capable, always mediocre. When Willie Brown brought his “girlfriend” in, California Democrats understood she was protected.

Again, the Left media’s hubris opens a door. How excited they were as they disseminated the lie that Florida was advancing a “Don’t Say Gay” bill. At the Academy Awards, which now draw 80 percent fewer viewers than only a few years ago, three remarkably unfunny women began by saying “Gay, Gay, Gay!” Hysterical.

Next, the Disney Corporation butted in and revealed to American parents that today’s Disney is not that of Mickey Mouse’s Fan Club and Snow White and Toy Story. Rather, it has been seized by extremist left-wing coarse ideologues driven by an agenda: to leverage the Disney name and trademark as a Trojan horse, infiltrating perverse and corrupt values into children’s lives. Parents never would have known had the Left not driven the narrative. DeSantis wanted only to prevent teachers discussing sex with children in grades K-3.

Virginia Democrats overplayed their hands, convinced they know what is best for children. Republicans responded by sweeping the state. Conservatives attracted Independents to win Virginia, and will replicate in Florida.

Return to Biden’s Ghost. We all recall the litany: describing “Super Tuesday” as “Super Thursday,” telling voters he is running for Senate. To a degree, it is a matter not to be mocked but of pathos. However, what we see is seen also by Putin, the ayatollahs, the North Koreans and Chinese.

Amid record crime surges with a 32 percent rise to 10,000 Black murder victims annually, inflation reaching towards 10 percent with home mortgage rates now doubling and still surging, anarchy on our southern border, our foreign policy in shreds, public schooling in chaos, we now have a president who might have been removed by now if his advisors had not named the least competent vice president in American history.

No one would know most of this if the Left media, who drive the narratives, had not been so arrogant as to believe these stories were going to favor them. Just as they believed Americans would shell out serious bucks to watch even more Don Lemon, Brian Stelter, and Van Jones than they already can get — but skip over — for free.

To attend any or all of Rav Fischer’s weekly 90-minute live Zoom classes on the Weekly Torah Portion, the Biblical Prophets, the Mishnah, Rambam Mishneh Torah, or Advanced Judaic Texts, send an email to: shulstuff@yioc.org. (Please note that Rav Fischer’s classes will be on hiatus during March and April.)