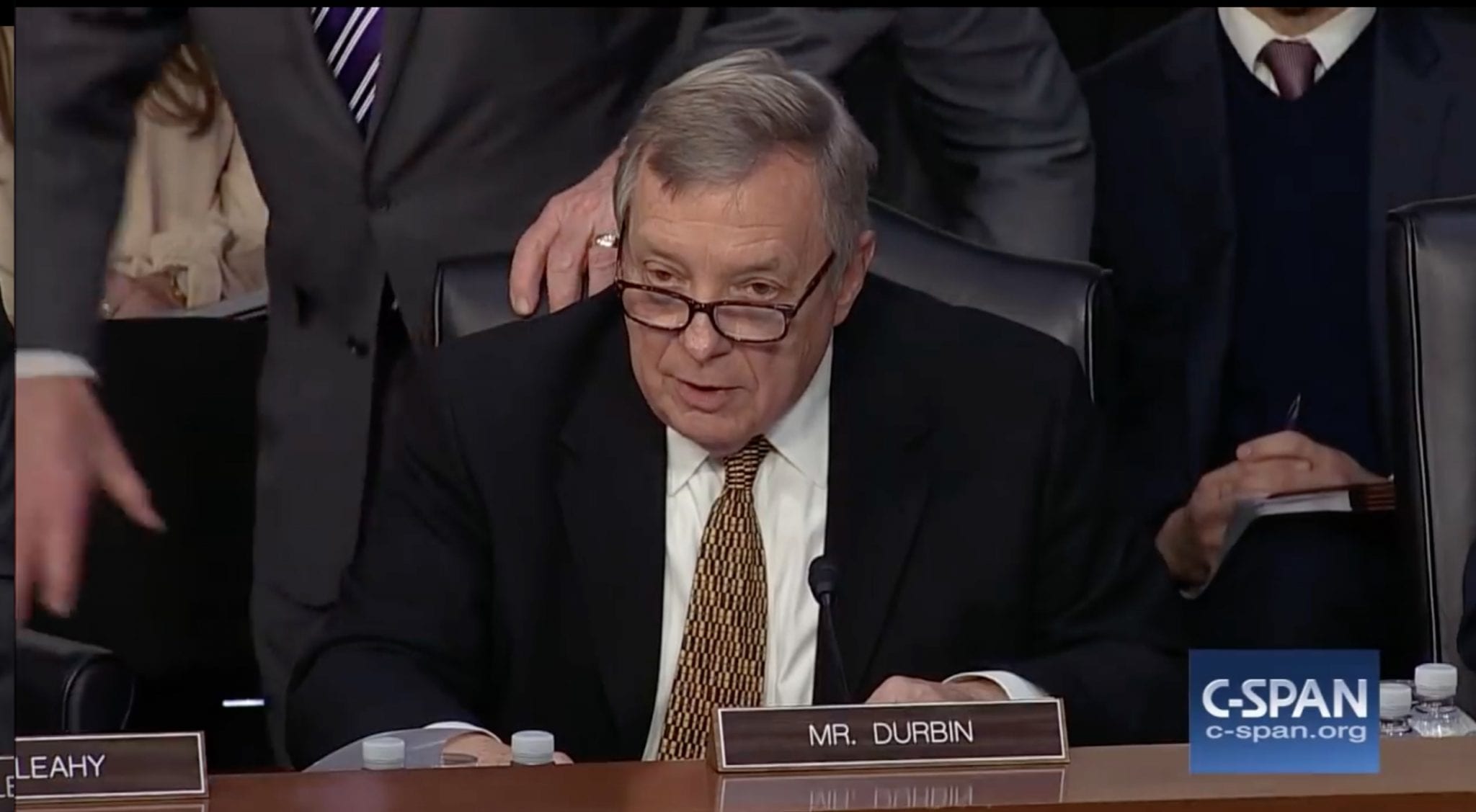 The last column in this space addressed the fact that, in the event that Amazon Post story, citing anonymous second-hand sources to allege that President Trump referred to a few Third World nations from which a sizable proportion of our illegal immigrants come as “s***hole countries” in a closed-door meeting with several members of Congress, turned out to be true the President might be guilty of several sins but untruth wasn’t one of them.

That, amid a veritable s***storm brewed up over the alleged incident, as virtually everyone who could call Trump a racist has done so and the international reaction to the kerfuffle has been, well, what our readers certainly must have assumed it would be.

It turns out, though, that untruth appears to be the primary sin of the likely source of the Amazon Post story which started the mess. Dick Durbin, Illinois’ senior Democrat senator who was in the meeting in question, didn’t exactly say he was the source of the allegation. But he did “confirm” that Trump used the language referred to in the Post article. The obvious conclusion is that it was Durbin’s staffers, who were “briefed on the meeting,” in the parlance of the Post piece, who tattled to the paper.

Durbin’s confirmation flies in the fact of two Senators who were in the meeting and have since denied Trump said what Durbin alleges. Those being Tom Cotton (R-Arkansas) and David Perdue (R-Georgia). In addition, Homeland Security Secretary Kirstjen Nielsen, who was also in the meeting, said she didn’t recall the use of the language in question either.

All agree that Trump was quite frank in his formulation of the specific issue discussed during the meeting from which Durbin’s allegation came; namely, the disagreement between Democrats and Republicans (and probably most of the rest of the country, regardless of how polls might spin things otherwise) as to whether America has a duty to afford Temporary Protected Status to illegal immigrants from countries like Haiti, Somalia, El Salvador, Afghanistan and others which might properly be referred to as s***holes given the stated aim of Temporary Protected Status in the first place.

Namely, that those places are so awful that it would be tantamount to a human rights violation to force someone from them to go home if that someone came here illegally.

We don’t know that Trump called them s***holes. If he did he’s guilty of colorful and accurate language, if perhaps slightly less than presidential. It’s reasonable to assume his sentiments were likely at least somewhat in tune with the connotation “s***holes” would confer on the discussion at hand.

The real scrutiny here should reside with Durbin. One of two things are true.

First, if Durbin is the only one in the meeting telling the truth about what Trump actually said and Cotton, Nielsen, and Perdue are lying to protect the president, which is what Durbin’s pals among the Democrats are contending, then he’s still guilty of partisan demagoguery and opportunism of the worst kind; namely, spewing to the media the candid comments of a negotiating partner from a closed-door meeting. The effects of such low-rent behavior are obvious; no one will ever open up and say what he or she really thinks in such meetings again when Durbin or his colleagues are in them, and the requisite trust for getting anything done will not materialize.

More on that in a second.

The second option is that Durbin was lying, which is more than a 50-50 proposition given Durbin’s history in meetings of this very kind. After all, in 2013 during a closed-door meeting at the White House over the budget Durbin told the media that a GOP House member told President Obama “I can’t even stand to look at you.” This was immediately denounced as a lie by both the House Speaker’s office and the White House, with then-White House press secretary Jay Carney specifically stating that “it did not happen.”

Durbin is also known for inventing rather outrageous charges against his fellow Americans in other contexts. He is, if you’ll remember, the Democrat who in 2005 compared American soldiers in Iraq to Nazis, an affront he was forced to apologize for.

When it came to the issue of, quote, “chain migration,” I said to the president, do you realize how painful that term is to so many people? African-Americans believe they migrated to America in chains and when you talk about chain migration, it hurts them personally.

Durbin wasn’t as offended as he made out in complaining about chain migration, which is universally understood as the process our ill-constructed immigration policy allows wherein family members of immigrants allowed into the country follow in turn regardless of skill, merit or character, as others perhaps more worthy but with fewer connections are left behind.

We know this because Durbin himself has used that term. He used it in 2010 when he himself publicly called for it to end.

These antics led to Trump splattering Durbin with one of the president’s signature demeaning nicknames. First there was Lyin’ Ted, then Little Marco, then Crooked Hillary, and now we’re back to an old favorite: Little Dickie.

Or is it Little Dicky? It doesn’t matter.

Trump could have called him Transparent Dicky if he wanted, because Durbin’s accusations aren’t hard to see through.

In case any of this is confusing, let’s make it simple. The Democrats insist on the Republicans surrendering to them on the probably-illegal Obama-era DACA policy, which involves granting de facto amnesty to illegal aliens by executive fiat. The Democrats demand that DACA be continued, and that demand is so fervent that they’re threatening to block federal appropriations bills and cause a government shutdown if they don’t get what they want. What’s more, the Democrats aren’t willing to trade anything for their DACA ambitions. They want a “clean” bill, or else.

Put another way, the Democrats are willing to shut down the government over a non-negotiable demand that illegal aliens who are here be given amnesty.

And they question Trump’s sanity!

Obviously, their interests dictate the issue can’t be framed in such a way. Were it so, this would be a monumental fool’s errand in an election year they’ve marked as a referendum on Trump’s prospective impeachment. If the public were to see the histrionics in Washington in those terms the supposed Democrat wave to come is less than likely to materialize; what’s more likely is folks might be hunting Democrat politicians with dogs this November.

So instead, this has to be about bigotry and racism, which are all the Left has remaining in its arsenal. Those slurs still apparently motivate their people, even though it’s quite apparent the rest of America is sick and tired of them.

And we already know Little Dickie leads the league in making such charges, so it makes sense he’d be on point at the s***hole.

What’s interesting about this shutdown, should it happen, is it won’t look like the previous one which so spooked the Republicans on Capitol Hill. With Trump in the White House you won’t have national monuments shut down or military payroll not met; he’s going to define “essential” functions of the government differently than Obama did. In fact, most Americans probably wouldn’t notice a government shutdown at all.

But the ones who will probably won’t like the thought that it’s happening out of homage to illegal aliens at their expense. And they might like it even less if they believe Durbin trumped up a lie as a smokescreen for the whole thing.

Scott McKay
Follow Their Stories:
View More
Scott McKay is publisher of the Hayride, which offers news and commentary on Louisiana and national politics. He’s also a writer of fiction — check out his three Tales of Ardenia novels Animus, Perdition and Retribution at Amazon. Scott's other project is The Speakeasy, a free-speech social and news app with benefits - check it out here.
Most Popular
1
The Right Prescription
Jan. 6: Seven Democrat Lies
by David Catron