by Ellie Gardey
A police officer at the TCF Center in Detroit on November 4 (Devi Bones/Shutterstock.com) 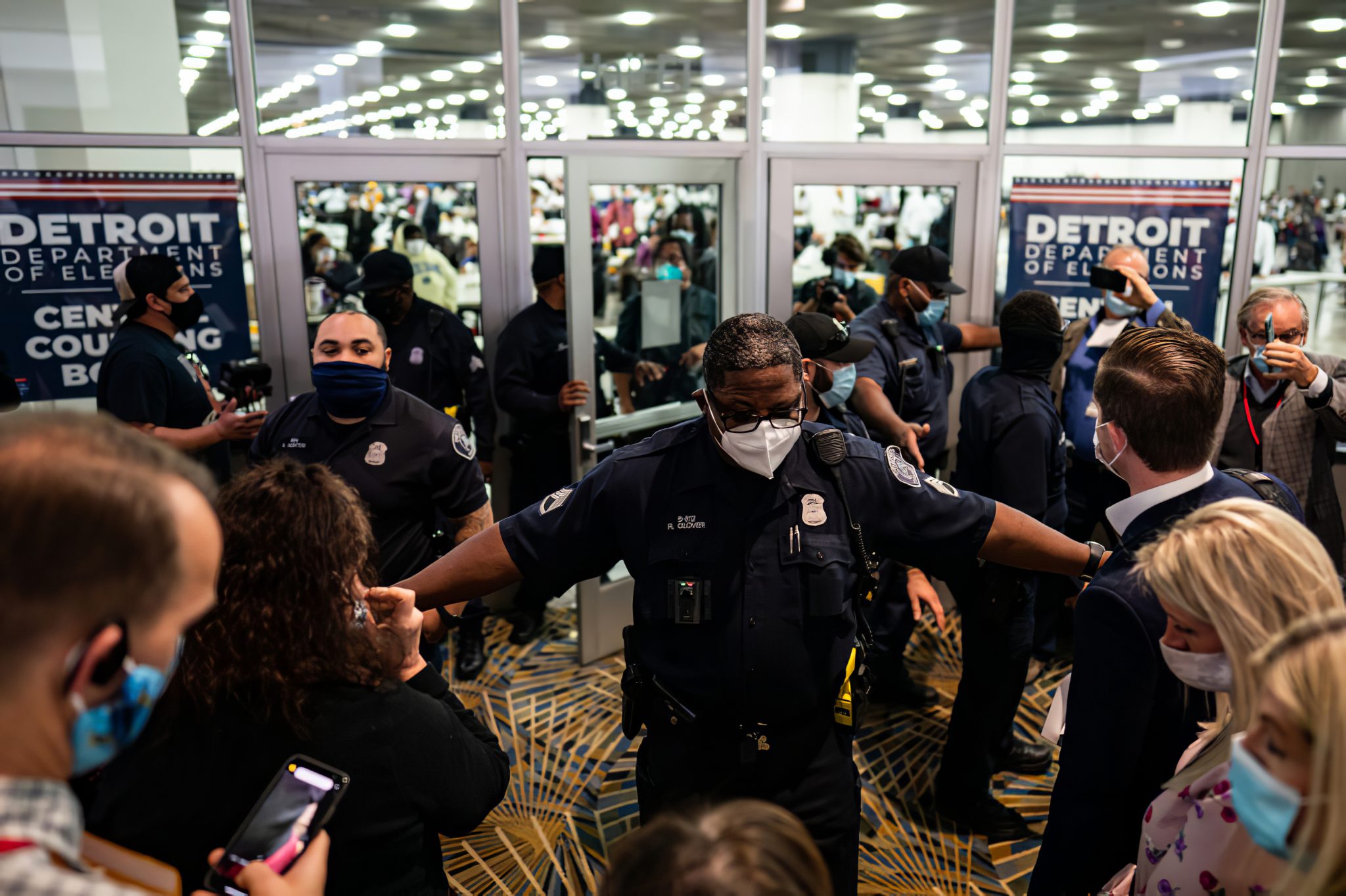 The Trump campaign attempted to use legal challenges of the election in Detroit as a last-ditch effort to win the presidency. It was a fruitless effort, as the final certification in Michigan gave Biden a 154,000-vote edge. The Trump campaign withdrew the federal lawsuit November 19.

But the lawsuit’s over 100 affidavits did reveal that in Detroit, the election was conducted in a totally partisan manner, where bias, secrecy, and intimidation were omnipresent.

The heavily Democratic city (where only 5 percent of the vote went for Donald Trump) appears unable to maintain fairness. Instead, they run their election so inappropriately that many feel doubt and uncertainty about the results.

In affidavits filed by Great Lakes Justice Center, 35 Republicans testified under penalty of perjury that poll workers or Democratic poll watchers actively blocked them from viewing the vote-counting process at the TCF Center in Detroit. The TCF Center, formerly known as Cobo Hall, is where absentee ballots for Wayne County were counted.

Quian Schmidt, a Republican poll challenger, testified: “There were several instances in which the poll workers and non-credentialed individuals used their bodies to prevent Republican and Independent poll challengers from witnessing and observing the ballot-counting process.”

Christopher Schornak, a Republican poll challenger, similarly said, “At each counting board, the poll workers attempted to block me from observing.”

Under Michigan law, poll challengers have a right to “observe the election process in voting precincts and absent voter counting boards at a reasonable distance.”

Republicans said that poll workers would cite COVID social distancing restrictions to prevent them from viewing ballots. For example, Braden Gaicobazzi said he was accused of trying to “kill” a poll worker for briefly stepping in to verify a ballot matched a name.

Republicans said they were made to stand in specific places — sometimes more than eight feet back — where they could not get a reasonable view of the counting process. Some reported they were screamed at and threatened with removal if they left this designated location.

“We could not get close enough to view signature or date on ballot envelope or any pertinent information,” said Betty Tyson.

“I was instructed to back up 6 feet from the table,” wrote Republican poll challenger Andrew John Miller, “however, the Democrat challenger, who stood in between where I was standing and the poll worker at the table, was not told they needed to back up.”

This blocking of Republicans, but not Democrats, from viewing vote counting is particularly egregious. It dismantles transparency and makes voters suspect fraud.

If election officials in Detroit want to promote a free and fair election, they should treat Republicans equally, without utilizing rules to force them out while allowing Democrats free rein.

But Republicans were not only prevented from viewing the counting process. They were also intimidated and harassed by poll workers, poll supervisors, and Democratic poll watchers. Forty Republicans testified that they experienced or witnessed intimidation or harassment against Republicans.

Abbie Helminen reported she was “shooed & even physically pushed by a poll worker.”

Jaqueline Zaplitny said, “I experienced intimidation by poll workers wearing BLM face masks and another man of intimidating size with a BLM shirt on, very closely following challengers, including myself, even though there was supposed to be social distancing going on.”

“I was surrounded by 4-5 Dem challengers,” said Mark Kerstein, “and intimidated when attempting to get the name of a supervisor who denied me the challenge.”

Alexandra Seeley said she was called a bigot and a c**t.

For their part, some Democrats said Republicans harassed and physically intimidated poll workers at the TCF Center.

“You’re talking about a city that’s still almost 90% Black, you’re talking about election workers that were at least 85% Black, and most of the GOP observers and challengers were majority white,” Khalilah Gaston, an election observer for the Democratic Party, said.

“You look at those optics, of having white people harass, berate, physically intimidate Black people — the optics of that are chilling,” said Gaston.

Democrats filed four affidavits in federal court, three of which alleged intimidation on the part of Republicans.

Joseph Zimmerman, a non-partisan challenger who filed an affidavit with the Democrats alleging intimidation, also described the situation in racial terms.

“At TCF,” Zimmerman said, “it was difficult not to notice the racial dynamic of aggressive, mostly white, challengers invading the personal space of election workers, who were mostly Black, and repeatedly questioning them and making it difficult for inspectors to continue with their work.”

Republicans also alleged that poll workers used the police to have Republicans removed from the hall, but did not do the same with Democrats.

“I never saw a Democrat escorted out,” said Kristy Klamer.

Disturbingly, Republicans testified that whenever a Republican was escorted out of the room by police, the poll workers would erupt in cheers.

“At that point I had watched two GOP people escorted out by the police,” said Elizabeth Williamson. “When they were escorted out Democrat volunteers and poll workers cheered.”

Colleen Schneider also said, “They started screaming that two Republicans cannot be at the same table, called the police and the police escorted him out to loud cheers from ALL of the workers.”

It is correct that under Michigan law there can only be one member of a party at each table. Some Republicans testified that this rule was not enforced against Democrats.

Others reported that the poll workers were wearing Black Lives Matter masks, even though political apparel is prohibited.

All of this amounts to an election process in the City of Detroit that needs to change. The rules should be enforced equally across all parties, and there should be no intimidation or harassment. Police shouldn’t be used as a tool to remove challengers from only one political party. And the cheering by poll workers when Republicans were escorted out by police was totally inappropriate.

To prevent this from happening again, Republicans should file a lawsuit before the next election using this evidence to get a judge to order a fair application of the rules during vote counting. Republicans could also ask the city to get the state government to supervise, but that may not amount to much, as the Michigan state government is controlled by Democrats.

No matter what people think about allegations of fraud in Detroit, they can all agree that the city shouldn’t be allowed to conduct another election in this shameful manner.