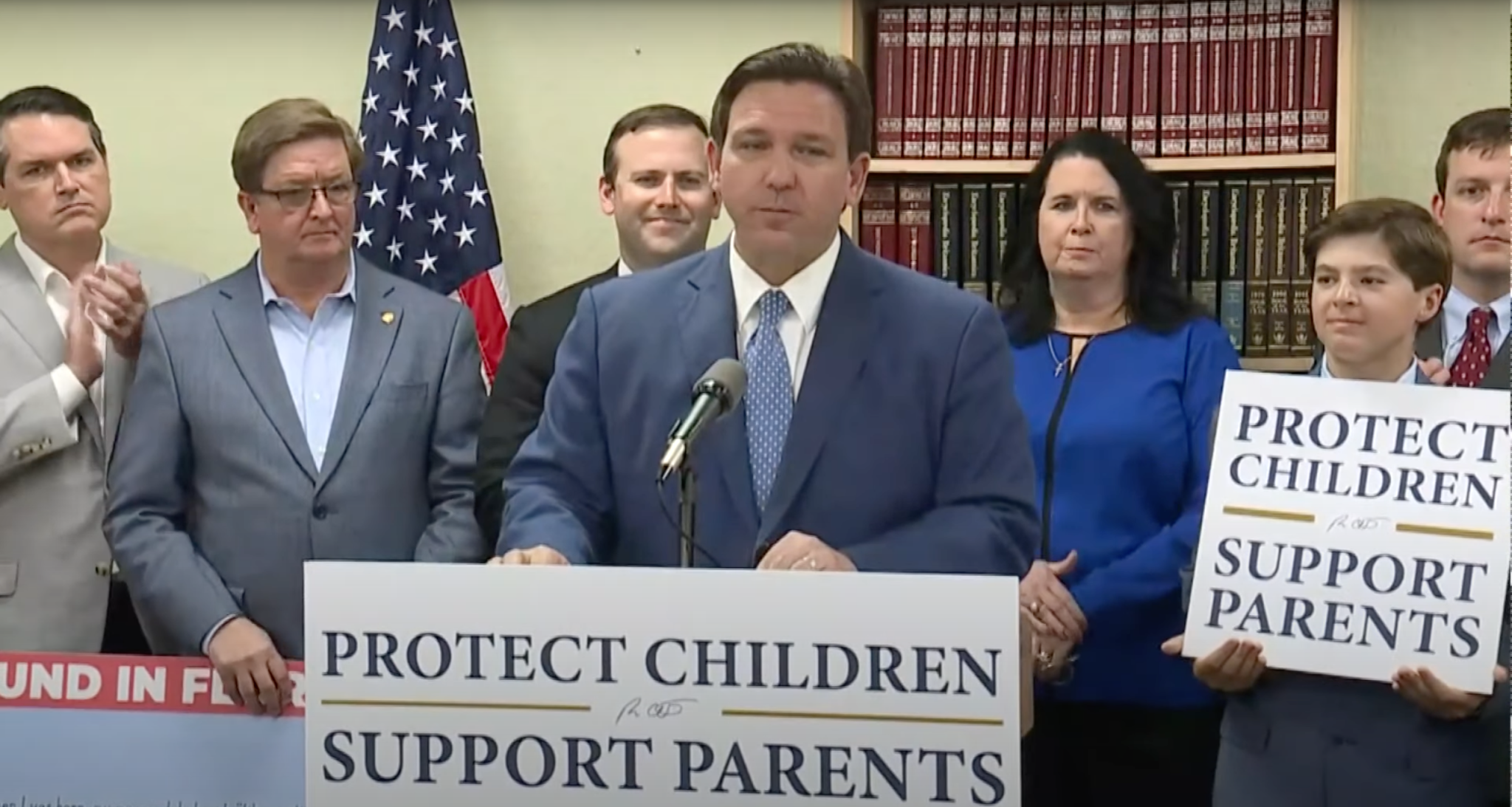 We can have an argument about exactly when it was that the Republican Party began to shrug off the intolerable weakness of the Bush era and learn to stand up for itself and its voters. But on Monday we saw that in at least one prominent example, that weakness is finally fading away.

Specifically, Florida Gov. Ron DeSantis, who is not only the future leader of the party but increasingly its current avatar, stuck a thumb in the eye of the Woke Left and signed Florida’s Parental Rights in Education bill.

Last week, this column talked about the opposite of DeSantis, Indiana’s abysmally mediocre Eric Holcomb, who choked on an easy bill his legislature had passed which prevented the incursion of biological males into women’s sports. Holcomb was joined in his disgraceful veto by Utah Gov. Spencer Cox, who vetoed a similar bill before Utah’s GOP legislature rebuked him with an override.

But DeSantis had already signed such a bill last year, and now rides with his legislature in rolling back insane gender ideology indoctrination in Florida public schools. The Holcombs and Coxes of the world lack the sand to go anywhere near that far, and voters notice.

In fact, the anti-grooming bill isn’t even particularly controversial. Nor are the girls’ sports bills in Indiana and Utah that their cowardly GOP governors vetoed. Overwhelming majorities of Americans reject transgender ideology and activism.

But the few who represent the Grooming Lobby represent lots of money.

Here’s an example of what that looks like. Jaime Harrison is the chair of the Democrat National Committee, He’s a politician from South Carolina who blew through $100 million in campaign contributions from gullible idiots in a run against Lindsey Graham for the Senate in 2020 and still lost in a landslide:

Once again, Ron DeSantis is dangerously dividing Floridians because he thinks it advances his own personal politics. This piece of legislation will only force thousands of LGBTQ+ children to live in fear and is a green light to politicians to censor schools and make the classroom less safe. Time and time again, DeSantis has proven he cares more about catering to extremists than protecting his constituents. Floridians deserve a governor who isn’t solely focused on scoring his next Fox News interview and is actually working to deliver for them.

Harrison is comically off-base if he thinks it’s divisive to stop woke radicals from grooming 5-year-olds for exotic sexualities. But here’s the important piece: he doesn’t think that. Jaime Harrison’s noisemaking on this issue is motivated by one thing and one thing only: his party exists now to do service to radical cultural elitists because those are the people funding the Democrat Party.

If that radical elite decides the next cultural aggression is to be open pedophilia, Jaime Harrison won’t hesitate to attack those who stand against it. It might sound crazy to you, but mark it: you will live to see just that.

DeSantis’ strong position on the anti-grooming bill puts him in the crosshairs of one of the most powerful corporations in America. The Walt Disney Company has a gigantic presence in Florida given its massive theme park outside of Orlando, and Disney did everything it could to intimidate DeSantis into not signing the bill.

Even after he signed it, Disney’s management still hasn’t shut up.

Statement from The Walt Disney Company on signing of Florida legislation: pic.twitter.com/UVI7Ko3aKS

The thing about Disney leaning into its disgraceful position on this bill is that it’s used to dealing with weak politicians of both parties who’ll happily cave into their woke advocacy in exchange for a chunk of filthy campaign lucre. It’s been three years since DeSantis was inaugurated as Florida’s governor and they still think sanctimony and threats in public, and bribery in private, will work on him.

But a man of conviction who sees through the bribery and recognizes the cultural rot at the heart of a Hollywood corporation whose industry creates men like Will Smith and Harvey Weinstein, and women like Lindsey Lohan and Britney Spears, will not be so easily swayed. (READ MORE: DeSantis Strikes Back)

Last week, Disney’s woke employees threatened to walk off the job in response to the bill. Only one of them showed up to protest in Florida. One. Considering that there has been a string of Disney employees implicated in sexual misconduct with children over the years, including four recent arrests of Disney employees as sex predators in Florida, perhaps the Mouse Gang recognized a problem with bad optics in going any further on DeSantis’ bill.

DeSantis recognizes that protecting small children from the institutional predators who would start them on a path which leads, in eye-poppingly high probability, to attempted suicide is more important than corporate mammon.

And God bless him for that. He’s up against some real monsters, you know.

DeSantis is currently running away with the Florida gubernatorial race. He’s doing so because voters see strength in him. He doesn’t yell and scream, and he’s never out over his skis. He makes sense but he does not flinch. And he takes on issues which are fundamental to American life. The Left’s insistence on perverting the education of our children creates just such an issue.

A Republican Party full of Ron DeSantises cannot be defeated. A GOP full of Eric Holcombs deserves to be.

To those who would serve in elective office: Please take note and act accordingly.