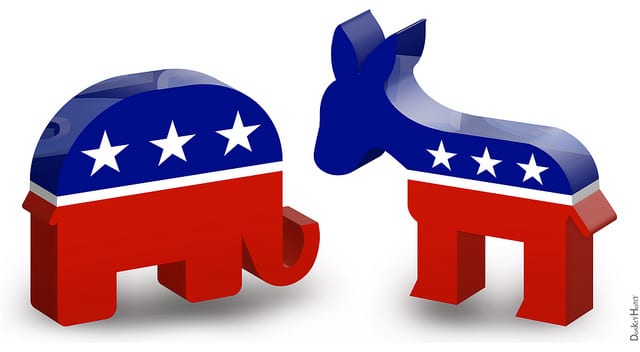 For as long as President Trump has been in office, Democrats and their media mouthpieces have been eagerly looking forward to the 2018 midterm elections. Not only are midterms historically favorable to the party not in the White House, but the hope from the left is that the constant negative din the MSM keep up regarding the president will drive great numbers of Democrats to the polls and turn things into an electoral bloodbath for the Republicans.

After picking up a seat in the Missouri state legislature on Tuesday, they are feeling even bolder. The seat is in a district that Trump dominated in 2016, so the feeling isn’t exactly unwarranted.

The article linked above also notes the lead the Democrats have enjoyed for some time now in the generic congressional ballot.

So all should be coming up roses in November for the Democrats, right?

First, about that generic ballot:

Before the Democrats start assuming a Democratic tsunami is bearing down on Washington, though, it is important to add context to the good news the party is seeing. That congressional ballot lead has narrowed considerably over the past 90 days or so.

There may be several contributing factors at play in that narrowing, but the last 49 of those 90 days are the one since the tax reform bill was passed.

The Democrats were nothing short of hysterical in the lead-up to the tax bill vote, even by their emotional standards. After repeating that the bill was nothing short of apocalyptic, the news since has been nothing but good for Americans. Bonuses are being handed out, investments by businesses are being made, and they are all being attributed to the passage of tax reform. It couldn’t look worse for the Democrats.

Wait, yes it can.

They’re response has been absolutely awful. Democratic officials who once fancied themselves the champions of the little man in America have been downplaying what a thousand dollars means to a struggling family. Nancy Pelosi infamously referred to it as “crumbs”.

Because they are always in sync, the media took up where Pelosi left off.

As several Americans spoke about how they would use their bonuses during a speech President Trump gave on Monday, NBC’s Katy Tur took to Twitter to denigrate them.

After being roundly mocked for a few days, one might presume that Tur would back down. Not so much:

Katy Tur Doubles Down On 'Condescending' Tax Cut Remarks: Do I 'Seem Out of Touch?' (VIDEO) https://t.co/qdolNBIfuX pic.twitter.com/7zSxSJg5Oq

This alone may be the undoing of their presumptive landslide.

They obviously can’t say that the tax bill was what they said it would be. It is now also obvious that they haven’t coordinated a coherent counter to the bill’s success. Better yet for the Republicans, none of them seem capable of shutting up until they do.

If the Republicans are smart, they should already be working on campaign ads featuring Pelosi’s “crumbs” remark and footage of Democrats sitting still during the State of the Union address.

Hoping that the Republicans do the sensible thing during a campaign is a bit of a stretch. The party does have a habit of making its own needless distractions.

Either way, the Democrats probably shouldn’t keep viewing the upcoming midterms as a gimme.