Americans are deeply (and rightly) concerned about high energy prices. All we have to do is look across the Atlantic to see how grim life can be when there is an acute energy shortage. Clearly, an intelligent energy policy should be a priority of our national government. Electing representatives who will formulate such a policy is not only a crucial mega-issue for this midterm election, but will continue to be of immense, and potentially existential, importance in American elections for the foreseeable future.

Americans need to wake up to how wrong-headed and destructive are the Democratic policies of stifling domestic fossil fuel production and imagining they can replace the lost energy with intermittent (misnamed “renewable” or “clean”) energy in the next decade or two. There are encouraging signs that the great awakening has commenced. Americans are aware of the Biden Administration’s animus against American oil and gas companies, and how Biden has preferred to beg the governments of Venezuela and Saudi Arabia to increase production so as to lower gas prices and hopefully boost his popularity in an election year. (That seems rather anti-American for an American president, doesn’t it?)

“One has to free oneself from the illusion that international climate policy is environmental policy. [One] must say clearly that we redistribute de facto the world’s wealth by climate policy.”

The American people generally have the common sense to connect high prices at gas stations to tight supplies. They know that Team Biden jettisoned the “let Americans produce oil and gas” spirit of the Trump Administration that led to U.S. energy independence. They know that Biden has restricted drilling, shut down the Keystone XL Pipeline, and made no secret of his desire to put American oil and gas companies out of business by 2030. They have seen his Secretary of Energy, Jennifer Granholm, laugh callously when asked what she intended to do to encourage domestic drilling for fossil fuels, and then offering the nonsensical rejoinder that she had no power to make OPEC increase production. That is all the proof that anyone needs to see that Team Biden favors foreign production over domestic. (That hasn’t stopped Biden and Democratic candidates such as New Hampshire Sen. Maggie Hassan from squealing in indignation that the oil companies against which the Dems are waging a jihad of destruction won’t come to the rescue of Democratic candidates — their would-be executioners — by upping production to lower prices, at least until the election is over.)

The Democrats’ complaints about the presently high profits of American fossil fuel producers shows their economic ignorance. All Biden et al. had to do to lower gasoline prices was to make peace with “Big Oil” (and little oil companies, too, since the anti-fossil fuels policies have been wonderfully nondiscriminatory, harming both big and small producers with admirable impartiality). If the Dems had simply let those companies do what they are designed to do — produce fossil fuels — then supplies would be higher and prices necessarily lower. Alas, Dems seem not to understand the law of supply and demand.

Unfortunately, Dems don’t have much of a grasp on the problematic physical, economic, geopolitical, and environmental ramifications of their pro-intermittent energy fixation either.

First of all, physical reality: as the physicist Mark Mills has shown, the supply of raw materials needed for electric vehicles and other “green” technologies (i.e., lithium, cobalt, nickel, manganese, rare earth metals, etc.) is simply way too small for production on the scale that greens envision.

Economically, because of these scarcities, the costs of green technologies will soar.

Geopolitically, because most of those desired materials are located outside of the United States, the pursuit of green energy will progressively diminish U.S. energy independence and make us vulnerable to unstable and sometimes hostile governments.

Finally, and most unforgivably, environmentally, the supposedly “green” party is pursuing solar and wind technologies that are by no means “clean” energy sources. The production of the essential raw materials for wind and solar are in many cases highly polluting, as are many “green energy” practices in the U.S. (See Michael Moore’s superb documentary, free on YouTube: “Planet of the Humans.”)

(As an aside, let me share an ironic contrast with anti-green “green” technologies: Fossil fuels are the true “green” energy source in terms of their environmental impact. The carbon dioxide that fossil fuels have put into our atmosphere have enriched the growth of crops and plant life. Carbon dioxide, after all, is plant food, and in the last four or five decades, an area equal to twice the size of the continental United States has been transformed from barren to plant-covered. Even the vast Sahara Desert has shrunk by eight percent; that is, an area nearly the combined area of France and Germany has gone green where the land had been desert.)

What are the forces (other than stupidity and ignorance) that are holding Democrats in solidarity with their anti–fossil fuels agenda? I see at least three main pillars in this partisan coalition:

These are neo-Malthusian misanthropes descended from the late-’60s strain of environmentalism that followed the pied piper, Paul Ehrlich, down the path of there are too many humans, and that’s bad. From there, some environmentalists often came to regard humans as a plague or a scum or cancer on the earth.

Few correlations in economic history are more significant than the high correlation between oil consumption and standards of living. It is no exaggeration to state that modern prosperity was powered by oil. (See chart.) 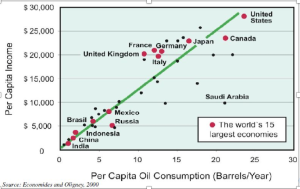 Because the pagan greens think there are too many people, and that people (themselves excluded, of course) don’t deserve modern standards of living, they are, and have been for years, essentially anti-energy, with fossil fuels being their primary but not only energy target.

The pagan greens fail to see, even today after a half-century of marked environmental improvements, that more people are an asset, not a liability, and as explained by what economists call the Kuznets curve, when the wealth of a society gets to a certain point, pollution turns downward. These green fanatics repeatedly issue shrill and dire predictions and can’t seem to enjoy the good news that the climate-related death risk has fallen by 99 percent over the last century. What a bunch of humbugs!

There is a lot of money being made due to the climate change cabal’s entrenchment in the Democratic Party. Government-funded scientists have found that lending credence to climate alarmism has been highly profitable for them and their universities, bringing to mind President Eisenhower’s warning in his farewell address: “The prospect of domination of the nation’s scholars by Federal employment, project allocation, and the power of money is ever present and is gravely to be regarded” and there is a “danger that public policy could itself become captive of a scientific-technological elite.” Indeed, while there are many fine scientists who have done work for Uncle Sam and the UN’s Inter-governmental Panel on Climate Change (IPCC) the structure of the IPCC has empowered political actors to coopt and misuse scientific research (for example, by issuing scary predictions on the basis of pathetic climate models that cannot be validated by real-world data).

Wall Street, seeing that trillions of dollars are in play, has been all-too-willing to jump on board the ESG bandwagon and to direct capital away from fossil fuel companies and toward producers of intermittent (sorry, “renewable”) sources of energy — for a fee, of course. Various political cronies and opportunists have been all too willing to dip into the federal treasury for the financing of this or that green boondoggle. Indeed, green energy probably has been responsible for more cronyism and corporate welfare than we’ve ever seen before.

I’ve lost count of all the leaders in the U.S. Government and in the United Nations and various multilateral government-sponsored organizations who have openly stated that the primary goal of the climate-change movement has been to effect a radical transformation of society, with socialism being the desired goal. One representative quote from a senior official of the UN’s Inter-governmental Panel on Climate Change: “One has to free oneself from the illusion that international climate policy is environmental policy. [One] must say clearly that we redistribute de facto the world’s wealth by climate policy.” The Green New Deal being pushed by Democrats is clearly a socialistic plan for a centrally planned command economy. To this cadre, climate change is the path to amassing immense personal power.

The solution to our energy woes is simple. It is encapsulated in the famous reply that a French business leader named Legendre gave to Louis XIV’s Minister of State, J.-B. Colbert, when the latter asked leaders of business how he could help stimulate the economy back then: “Laissez-nous faire” — roughly translated: Leave us alone and conditions will improve. Yes, you enthusiasts for Big Government, get out of the energy business and let the market bring the needed supplies to market. That policy alone will provide us with the kind of energy we most need: the most efficient, reliable, and affordable forms.