In a rare sign of unity on Capitol Hill, a bipartisan group of congressmen joined religious leaders and activists Tuesday in the Rayburn House Office Building to celebrate the 50th anniversary of the reunification of Jerusalem.

Yom Yerushalayim (Jerusalem Day) is a national holiday in Israel commemorating the day the Jewish state gained control of the Old City, unifying the holy city, during the 1967 Six-Day War. Israelis and worldwide Jewry, as well as supporters of the Jewish state, celebrate this day each year on the 28th of Iyar on the Hebrew calendar, which is also when Jews regained access to the Western Wall.

Dr. Daniel Williams, executive director of the Israel Allies Foundation, hosted the event. His opening remarks set the tone for the afternoon:

Israel Allies is thrilled to host this Capitol Hill celebration and in one room have such tremendous support for Jerusalem as Israel’s eternal and undivided capital. We greatly appreciate the many members of Congress and Jewish and Christian leaders who showed up today to encourage the President to move the U.S. Embassy to Jerusalem where it belongs.

Williams’ remarks were echoed by the members of the House and clergy in attendance, including Rep. Brad Sherman (D-CA):

For 3,000 years Jerusalem has been the center of the Jewish world. The Israeli government’s track record in allowing freedom of worship for all religions in Jerusalem compels us to affirm the importance of preserving Israel’s sovereignty and legal rights to its historic capital… It is only under Israeli sovereignty that all religions have been free to practice their faiths in peace in Jerusalem. 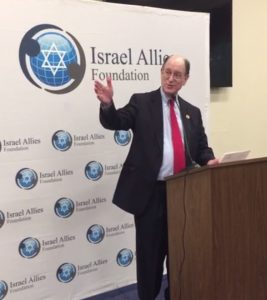 Sherman continued, “I’ve been to the sight where our embassy is supposed to stand. That land is in a part of Jerusalem permanently allocated to Israel under the Saudi peace plan. It is time for the United States when it comes to Jerusalem to be at least as pro-Israel as the government of Saudi Arabia.”

It is important that as we move forward, Republican, Democrat, liberal, conservative, regardless of where you are from around our country, that we understand that Jerusalem is the eternal, undivided capital of the Jewish state of Israel. It should be recognized as such. That is what it is. 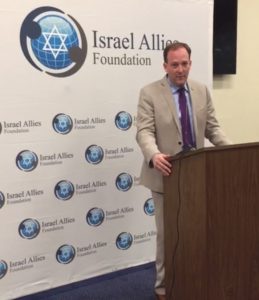 Star Parker, founder and president of the Center for Urban Renewal and Education, told attendees:

All across the Arab countries in the Middle East, Christians are being purged and persecuted and brutally murdered. But not in Israel. In Israel, Christian Arabs are being educated and employed. 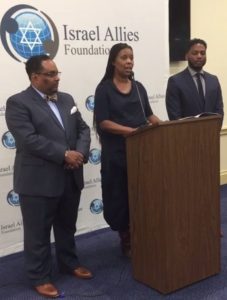 Israel is an example of faith and freedom, vision and hard work to poor people and victims of tragedy around the world. I proudly stand here today with all of you to celebrate Jerusalem Day and to celebrate the 50th anniversary of the reunification of Jerusalem. And I urge President Trump to follow through on his campaign promise and move the American embassy to Jerusalem.

Before President Trump left for Saudi Arabia, Italy, and Israel last week, reports surfaced that he would not announce, while in the Jewish state, that the U.S. would be moving the embassy from Tel Aviv to Jerusalem. Israel Allies Foundation responded with a petition drive, that states in part:

It is time that the United States fulfill the promise it made in 1995 with the Jerusalem Embassy Act. Your leadership on this issue will certainly inspire additional countries to move their Embassy to Jerusalem as well. The location of our Embassy has no bearing upon the prospects of peace. Let us also remember that we must not pander to the threats of terror groups.

According to IAF, over 1,000 people have signed the appeal to the president.