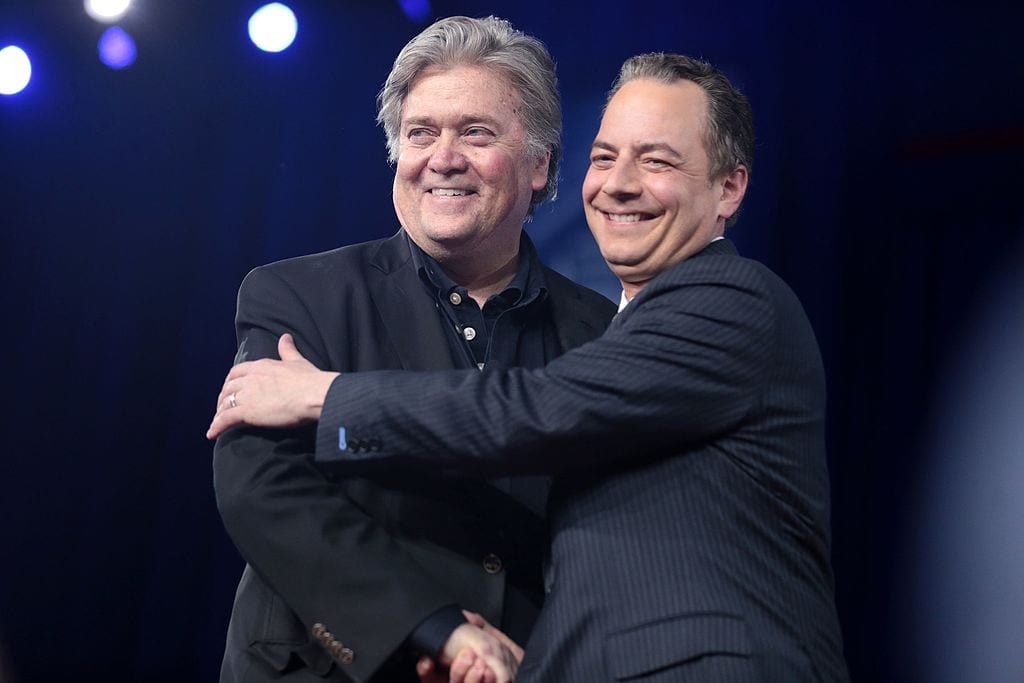 I count myself as a huge Steve Bannon fan. He has done more to advance authentic conservatism in America and to move it from the theoretical to the actual than just-about any other American alive today. And I know how much the Left is celebrating his ostensible political demise during this past week, as he has been lambasted by President Trump, abandoned by the Mercer family, induced to resign from Breitbart, and removed from XM satellite radio. I cannot think of a single area of political theory or philosophy where I disagree with him.

But, for me, my greater concern during recent weeks, particularly after the Roy Moore debacle, has been that we Republican conservatives do not now need a Tea Party-style civil war within the GOP over the purity of the November 2018 U.S. Senate candidates we run against the Democrats. By contrast, we desperately did need exactly that internal fight in 2010, 2012, and 2014 when Obama was in the White House because the GOP mainstream simply was without direction, clutching to power without ideology, content to roll over and let Obama push them around, from the Iran Deal to everything else. They even allowed Obama to make international deals without holding him to the constitutional requirement of a two-thirds super-majority to enact treaties. They let him run rings around them.

They were useless, too well mannered, too polite. One thinks back to John McCain being too polite during the 2008 Presidential election to raise subjects like Bill Ayers, the Rev. Wright, the Tony Rezko deal. It took Rudy Giuliani and Sarah Palin at the Convention to give that campaign ideological direction and any fight at all. Similarly, one thinks back to Mitt Romney being too polite to stand up even to Candy Crowley at the moment of truth during that third and crucial debate in 2012. It was clear that we needed a new breed of Ron Johnsons, Mike Lees, Ted Cruzes, even Rand Pauls to shake up the GOP side of the Senate and to hold Republicans to the litmus test of: “Will you finally keep your promises to the voters who elected you?” To get that dire need fulfilled, we also concomitantly paid a heavy price by running several incompetents, inadequately vetted beyond knowing that they were Tea Party loyalists, who blew several winnable Senate seats that the GOP had for the taking. It was a risk born in desperation, a price paid, a lesson learned.

More recently, Steve Bannon was ratcheting up a new campaign for ideological purity. With his successful insurgency effort during the Alabama primaries to unseat Luther Strange and replace him with Judge Roy Moore as the Republican candidate in the recent United States Senate election in the Yellowhammer State, Steve Bannon launched the first salvo in a new search for ideological perfection. Certainly, once Judge Moore got the nod, many of us backed the Republican fervently. If Judge Moore thereupon had gotten elected, the Senate Ethics Committee could have investigated him to their hearts’ delights because, regardless of outcome, the Republican Alabama governor would have been situated to appoint any successor who would be needed. But we never got that far. In the end, we know how it all worked out. He lost not to Doug Jones but to 23,000 write-ins including Snow White, Bugs Bunny, Kermit the Frog, Jimmy Buffett, and Clint. The lesson for all Republican conservatives was brutal but valuable: November 2018 is not the time for securing defeat from the jaws of victory.

Unlike 2010, 2012, and 2014, we now have the White House, and we have the most conservative Republican President in a century or so — far, far more conservative than even Ronald Reagan ever was. Hard to believe, but true. With this President, the primary directive for Republicans now needs to be holding the Congress in November. The House actually is very “holdable.” Mainstream media polls today mean nothing about elections a year from now. (Remember how the polls had Hillary by a landslide?) The Media Dreamers and their polls underestimate the congressional power of incumbency, the impact of the 2010 census on attendant redistrictings, and the demographic reality that liberals congregate in pockets of urban chaos, while the vast majority of the American map is spread out with crimson-red Republican counties. Moreover, this next year will see Americans bringing home more money each paycheck as tax reform immediately results in less income withholding, and they will get long-awaited salary bonuses and pay raises as the longer-range impact of the tax cuts plays out these next eleven months.

The key battle may well unfold in the Senate races, and Republican prospects now are enticing because the Democrats have to defend 28 seats in November while the GOP must defend only 5 — and five or more of those Democrat seats up-for-grabs are in states that are inherently conservative and pro-Trump like North Dakota, Montana, Indiana, Missouri, and West Virginia. Several other states with Democrats on the ropes also will be in play, including Ohio and Florida. A serious Republican gain really is within reach, although GOP seats in Arizona and Nevada may be in jeopardy, too. The bottom line is that Republicans need to hold the two Houses of Congress in November because, with all that President Trump has accomplished in only one year, the forthcoming three years from January 2018 through December 2020 hold great potential for rectifying the federal courts even more impactfully, very possibly replacing another one or two Supreme Court justices like Justices Kennedy and Ginsburg, and proceeding at a great pace to continue turning around eight years of the Obama Mess and also to reverse several preceding years of the “kinder gentler” Bush Mess. These three years ahead can see a generational change in the way America handles immigration and ends chain-migration and immigration lotteries, constructs the border wall, restores more capitalism to the economy, liberates industry from over-regulation and expands our own home-based energy production even further, actually moves our Israel embassy from Tel Aviv to Jerusalem as announced-and-declared, finishes off ISIS, handles the impending showdowns with North Korea and Iran from positions of strength rather than with genuflection and salsa dancing, and continues to restore a culture of patriotism and pride after the Obama decade of kneeling in front of sheiks, tyrants, and our own flag.

With only 51 GOP Senate seats now in hand and with a seriously good chance for several more pick-ups, this is not the mid-term for a Steve Bannon Crusade to knock off one after another electable Luther Strange in favor of one Roy Moore after another. A Trump in the hand is worth two of the Bush. If we had George Bush (either) in the White House — sure, might as well have a civil war and roll the dice. What’s to lose? What — we won’t get David Souter approved? Harriet Miers? But not with this President. A GOP civil war at this time could result in losing the tenuous control of the Senate rather than in increasing the Republican margin. It takes 50 senators plus Vice President Mike Pence to approve federal judges. That’s all the margin we have — not even tuppence.

It is for that reason that, even as the Left gloats and salivates for a few more days over an Oprah Presidency — for a Democrat Party that defines itself by food-stamp and welfare giveaways, who better to lead them than a person who gives away cars to everyone in the room? — Steve Bannon’s fall from grace right at this moment could not have come at a better time for the Republican conservative agenda. I really do love the guy, and I am avidly rooting for his return to favor — as soon as possible after mid-November 2018.