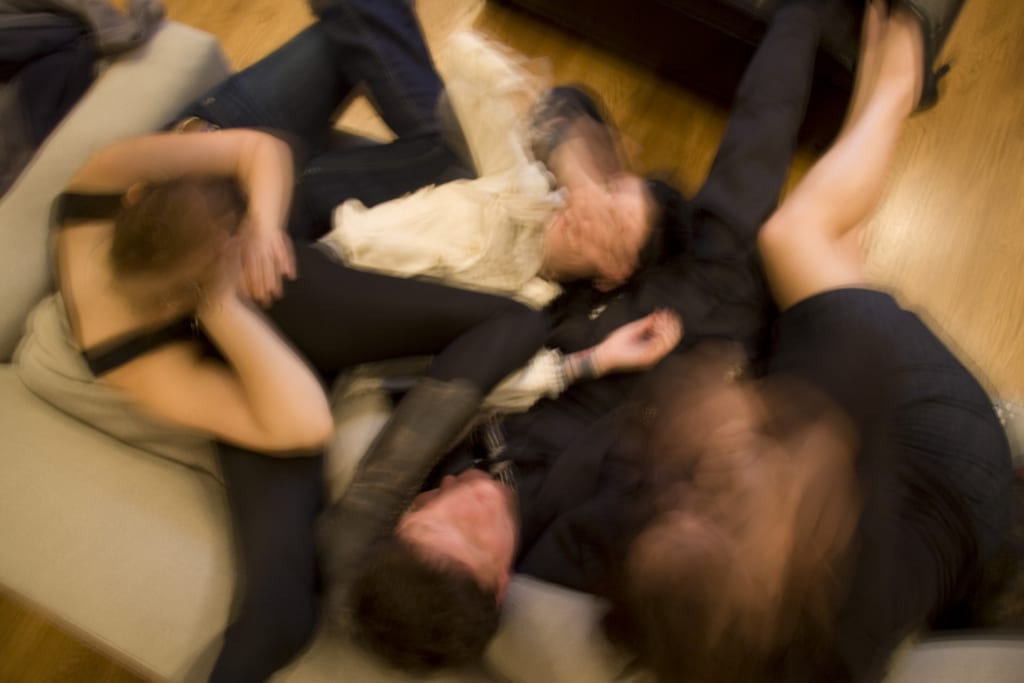 Vanity Fair ran an excerpt of the book Brotopia by Emily Chang to be released in February.  By her account, Silicon Valley is a nerd-boy’s literal wet dream. Young entrepreneurs, married and single alike, get together and have sex. The executives don’t feel guilty about it at all. They are living their “lifestyle choice” and who are you to judge?  Where women once complained about the boys club of the golf course or the literal boys club, now, there’s sex clubs and women are damned if they do participate and damned if they abstain.  The article reveals an amoral culture where anything goes.

These sex parties happen so often among the premier V.C. and founder crowd that this isn’t a scandal or even really a secret, I’ve been told; it’s a lifestyle choice. This isn’t Prohibition or the McCarthy era, people remind me; it’s Silicon Valley in the 21st century. No one has been forced to attend, and they’re not hiding anything, not even if they’re married or in a committed relationship. They’re just being discreet in the real world. Many guests are invited as couples—husbands and wives, boyfriends and girlfriends—because open relationships are the new normal.

I believe there is a critical story to tell about how the women who participate in these events are often marginalized, even if they attend of their own volition. One female investor who had heard of these parties before I approached her told me, “Women are participating in this culture to improve their lives. They are an underclass in Silicon Valley.” A male investor who works for one of the most powerful men in tech put it this way: “I see a lot of men leading people on, sleeping with a dozen women at the same time. But if each of the dozen women doesn’t care, is there any crime committed? You could say it’s disgusting but not illegal—it just perpetuates a culture that keeps women down.”

They don’t necessarily see themselves as predatory. When they look in the mirror, they see individuals setting a new paradigm of behavior by pushing the boundaries of social mores and values. “What’s making this possible is the same progressiveness and open-mindedness that allows us to be creative and disruptive about ideas,” Founder X told me. When I asked him about Jane Doe’s experience, he said, “This is a private party where powerful people want to get together and there are a lot of women and a lot of people who are fucked up. At any party, there can be a situation where people cross the line. Somebody fucked up, somebody crossed the line, but that’s not an indictment on the cuddle puddle; that’s an indictment on crossing the line. Doesn’t that happen everywhere?” It’s worth asking, however, if these sexual adventurers are so progressive, why do these parties seem to lean so heavily toward male-heterosexual fantasies? Women are often expected to be involved in threesomes that include other women; male gay and bisexual behavior is conspicuously absent. “Oddly, it’s completely unthinkable that guys would be bisexual or curious,” says one V.C. who attends and is married (I’ll call him Married V.C.). “It’s a total double standard.” In other words, at these parties men don’t make out with other men. And, outside of the new types of drugs, these stories might have come out of the Playboy Mansion circa 1972.

Married V.C. admits he might decline to hire or fund a woman he’s come across within his sex-partying tribe. “If it’s a friend of a friend or you’ve seen them half-naked at Burning Man, all these ties come into play,” he says. “Those things do happen. It’s making San Francisco feel really small and insular because everybody’s dated everybody.” Men actually get business done at sex parties and strip clubs. But when women put themselves in these situations, they risk losing credibility and respect.

Another female entrepreneur described the unfair power dynamic that’s created. “There is this undercurrent of a feeling like you’re prostituting yourself in order to get ahead because, let’s be real, if you’re dating someone powerful, it can open doors for you. And that’s what women who make the calculation to play the game want, but they don’t know all the risks associated with it,” she said. “If you do participate in these sex parties, don’t ever think about starting a company or having someone invest in you. Those doors get shut. But if you don’t participate, you’re shut out. You’re damned if you do, damned if you don’t.”

Barons of industry bedding beautiful women, even debauched sex parties is as “new” as Caligula or the Roaring Twenties. The equation is always the same: Rich playboy + willing women = Victimized women and voracious men.

What’s interesting is that the women of Silicon Valley are shocked that they’re in a lose-lose proposition. It displays a fundamental misunderstanding of the male mind and the consequences of their feminism’s chief tenet: that men and women are the same.

Feminists believe that gender is a construct and that the artificial imposition of gender creates a one-down situation. Read through the Brotopia excerpt, though, and one sees basic differences in perception, behavior, and expectations based on gender. Surprise! The feminism that supports gender nullification enables an environment abusive to women.

Marriage, that old, anachronistic tradition, protects women. It clarifies expectations between the sexes. It provides an emotional and physical safety net around both parties. For men, it channels base drives and energies into building and creating rather than destroying. Married men enjoy longer lives, more wealth. It gives men a mission. Or, it can. For women, marriage means better standard of living, economic safety, and stability for family. Both parties benefit when they’re committed to building a life together.

Open marriage is no marriage at all. It is a contract of convenience that defies the purpose of the bonds — trust, safety, family, growth.

Silicon Valley is a debauched place filled with amoral social deviants who use their money to buy sex. The guys in high school who couldn’t get laid now believe they have license and use modern language to justify their behavior. They use the words of third-wave feminists against themselves. It’d be hilarious if it weren’t so destructive.

Women continue to learn, too late, that feminism reinforces the basest male behavior and uses that behavior as a moral framework for themselves. They make themselves objects and then decry being objectified.

The solution is for women to de-objectify themselves and refuse to participate in these degrading rituals. They should refuse to indulge the appetites of indiscriminate men. Expect more. But women have lied to themselves about their own biology and their emotional needs and so adopt a belief system where predatory men are the chief beneficiary. Their choice is its own reward: less self-respect, less respect, and ultimately, less power to make a difference. They can occupy the snuggle puddle or the corner office, but they can’t have both.