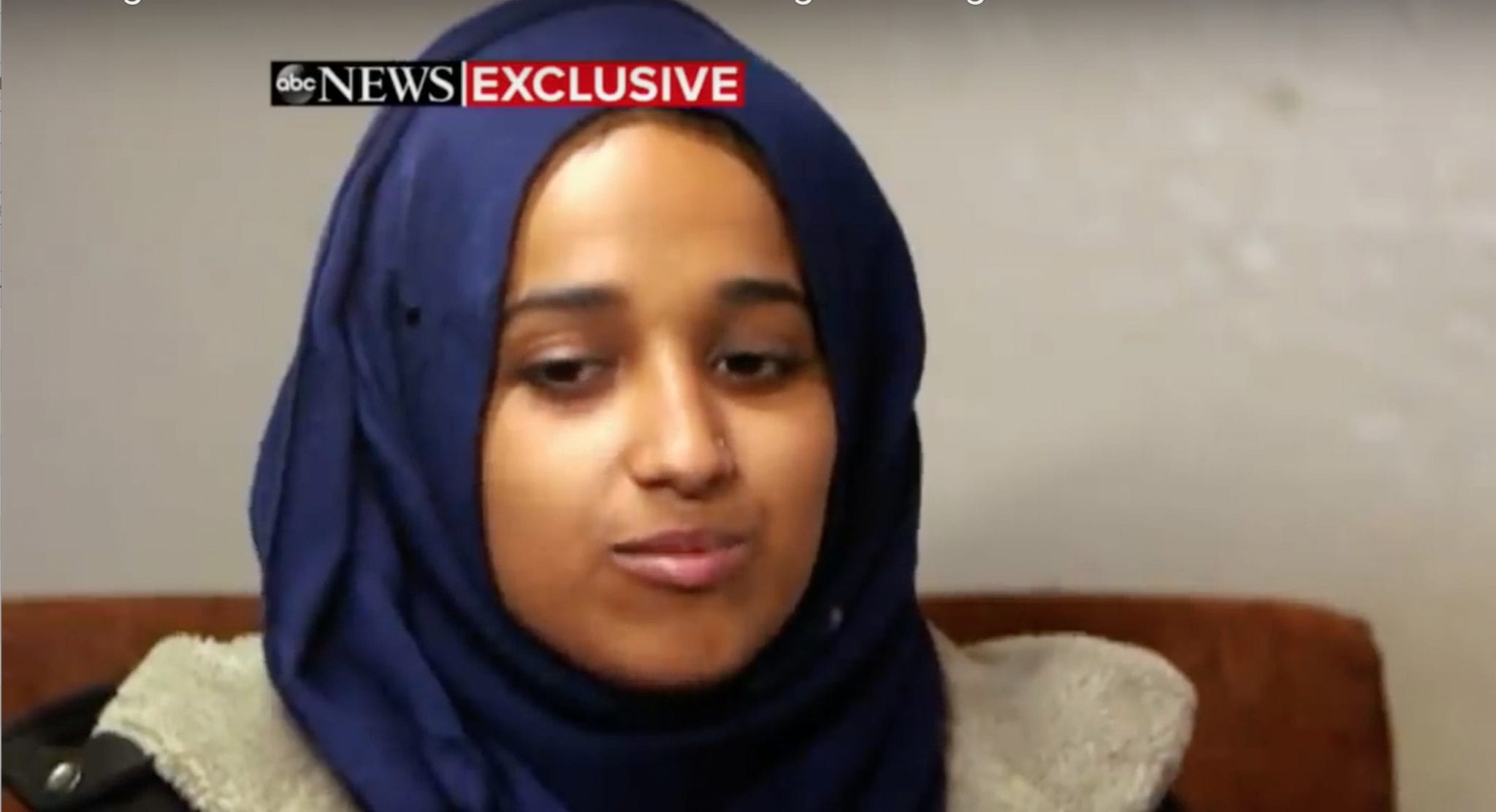 In 2014, Hoda Muthana, then 20 years old, left Alabama to become an ISIS bride in Syria. When she left the United States, she posted her passport on her Twitter account and implied she was about to burn it.

Now Muthana wants to return to the U.S. with her 18-month-old son, but President Donald Trump doesn’t want to let her back in the country.

Here’s the TV news take on her case as laid out by the Today show’s Craig Melvin: “This is the Alabama woman who left four years ago to join ISIS. She has a son. She said that she wants to come home now; she was radicalized, she made a big mistake.”

“Alabama mother begs to return to the US,” reads an online ABC News headline. Considering that Muthana left Alabama four years ago to renounce the United States and join ISIS, “Alabama mother” is not the way most people would describe her.

Problem: Muthana doesn’t seem really sorry. In an exclusive interview with ABC News, Muthana was asked what she thought would be proper punishment for joining ISIS. She replied: “Maybe therapy lessons. Maybe a process that will insure us that we’ll never do this again.”

Muthana also described herself as “just a normal human being who’s been manipulated once and hopefully never again.”

The “Manson girls” — young women who trolled and killed for cult leader and mass murderer Charles Manson in 1969 — come to mind. But at least the creepy young women who fell for Manson didn’t know what they were getting into when they joined his so-called family.

Muthana was radicalized over the internet. Months before she flew to Istanbul on the road to Raqqa, Syria, ISIS posted a gruesome video of one of its masked thugs beheading journalist James Foley.

ISIS forces had beheaded Syrian troops, humanitarian workers, civilians, and western hostages. A normal person does not see videos of people being beheaded and want to marry the executioner. But Muthana did. She married three ISIS fighters as her contribution to the caliphate.

Muthana also had a Twitter account on which she urged others to drive trucks to kill people at American parades. And she urged her followers to look up President Barack Obama’s schedule so they could “take down that treacherous tyrant.”

Muthana now is being used as another example of what is wrong with Trump. After all, the president tweeted, “I have instructed Secretary of State Mike Pompeo, and he fully agrees, not to allow Hoda Muthana back into the Country!”

As Pompeo told Melvin, the U.S. does not believe Muthana is a U.S. citizen, as her father served as a Yemeni diplomat for the United States shortly before her birth. The government asserts that the fact that Muthana had a U.S. passport did not establish her bona fides as a citizen.

Muthana’s family is suing to prompt Washington to get her out of a Syrian refugee camp and back into the United States.

“This shows us to be a nation of laws,” attorney Charles Swift argued on CNN Friday. Swift also said that Muthana “understands that she’s going to be prosecuted.” I’m not so sure she does understand, given her assertion that jail time is less likely to help her when she really needs help to recover from the trauma she experienced.

Muthana family attorney Hassan Shibly told the Daily Mail that Trump would use the case to undermine birthright citizenship in a way that affects “mostly Latino Americans.”

There is one little problem with that argument. According to Swift’s petition to establish Muthana’s citizenship, as well as that of her son, the U.S. government sent a letter to her in care of her parents’ address on Jan. 15, 2016 informing Muthana she was not a citizen. January 2016 — that’s before Trump was elected.

It was the Obama administration that determined Muthana was not a citizen. According to Swift’s brief, the United Nations did not notify the U.S. government about the father’s diplomatic status until months after the daughter was born. And if there is one thing President Obama was not known for, it was working to end birthright citizenship.

Swift may well be right on the citizenship issue at hand. And if he is, may Muthana be greeted with a quick embrace from a legal system ready to let her take responsibility — real responsibility — for joining a terrorist organization.

Or maybe the courts will rule that Muthana is not an American, and if that happens, for once, it won’t be because of Trump.