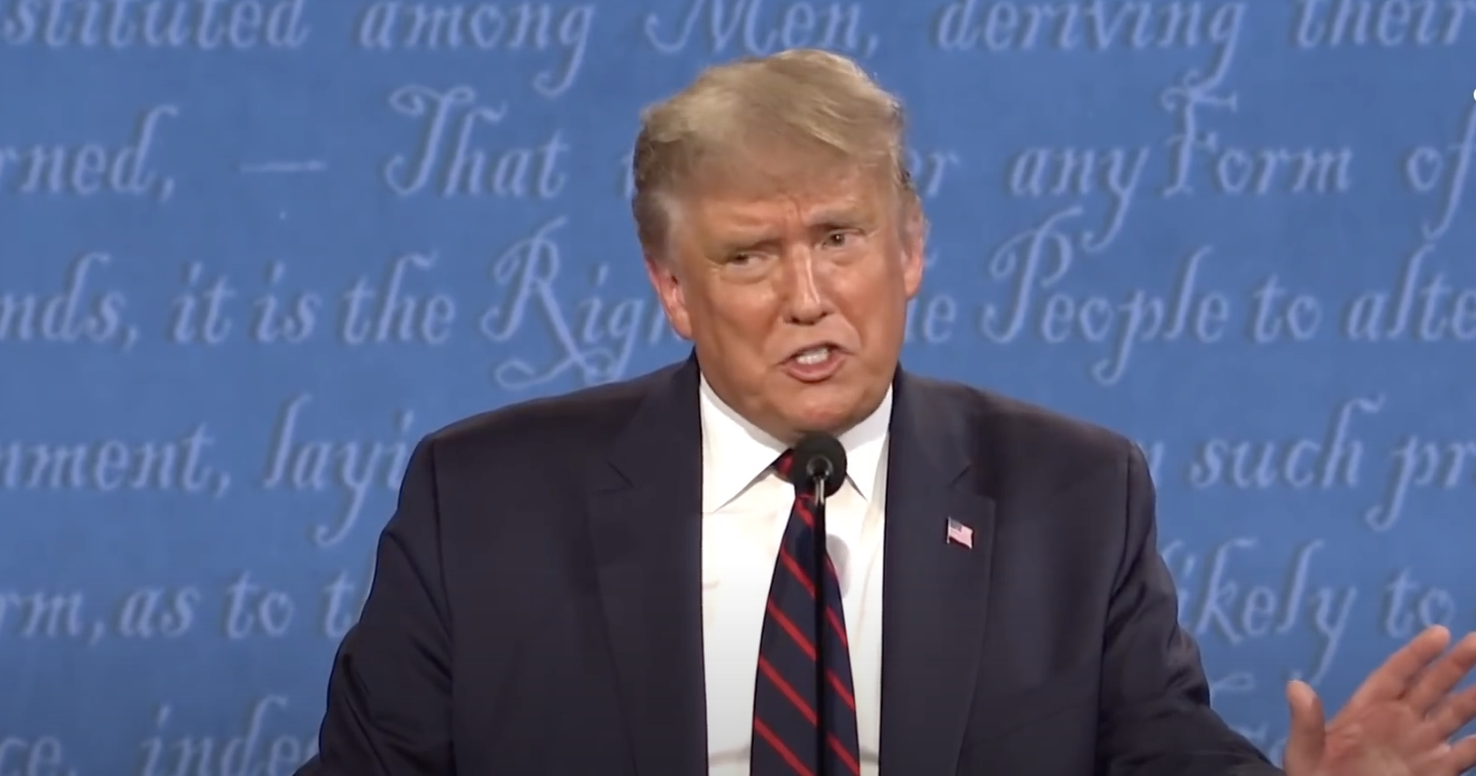 Is this really the best this wonderful country can do for a president? I wouldn’t have either one of them to dinner in my home. Trump could have won if he had just taken the high road and shut up (a request to a sitting president by a former VP, who apparently also has no class). They both needed to be backhanded for their language and made to sit in the corner with no supper.

Mr. Trump, state your point succinctly and then stand there politely and wait for the other guy to hang himself. You looked foolish. Don’t expect Queen Elizabeth to ask you to dinner. You have done very well for your country, but you need to grow up and have some class that isn’t low.

I disagree with you totally, Dan. What was our president to do? Sit there and take it? He was debating two people, and it was a set up. Wallace was so biased it was pitiful. Don’t make it sound like Biden was a winner. What about all the rallies that President Trump holds with thousands of people? Where are Biden’s followers? The media! Let’s pray that the fraud-makers don’t steal this election from the best president the country has ever had. He’s not a politician. He’s not polished. If he is attacked — calling the president a clown, a racist, a liar — he responds. Cutting him off when he is trying to correct lies that Biden spewed was shameful. Where was the evenness in this “debate”? Where on the national news does one go to see the crowds and the decent people that show up for the president? Biden is a joke, and anyone who gives him credence is a joke also.

You nailed it. The debate was a cringe-worthy disaster. If the goal was for the president to win swing voters, it failed, and probably cost Trump the election — much to my dismay.

Biden clearly won, if only because he showed self-control. How his handlers got him to remember everything, even if much of it was lies or distortions, was impressive. They would be advised to skip the next two debates. He hit a home run this time. Subsequent debates could be trouble for him.

Please continue with your honest analysis of this and other events/topics.

Spot on. I stopped watching — quite the train wreck.

I think you summed up the fiasco quite well. It was very much two adolescent senior citizens arguing in a bar, while Aunt Karen standing nearby keeps interrupting to try to get them to behave. Any non-partisan bystander listening-in would have recognized which antagonist was the bully and which was just a jerk. However, their sympathies would probably have rested with the jerk.

Donald Trump gets very few opportunities to present himself to the American people without the negative media filters. He squandered that opportunity by presenting himself as the boor the press constantly makes him out to be. I got the feeling he’s tired of being president and doesn’t really want the job anymore.

Well, that was blistering. A well-written and well-argued newsletter, but to declare Biden the winner I find a bit much.

Donald Trump not waiting his turn did not bother me in the least. Chris Wallace going all the way back to Charlottesville with his questions did. Joe Biden lying stupidly and trying to pretend he is something he is not — a kind, caring uniter — was farcical. That Trump took control of that room in his bombastic style I found rather refreshing. I keep wondering why people think maybe this time Trump is going to be something he is not. His truth is in his being — likability, yes, but also optics. Trump won the night on optics.

You are spot-on with your assessment. Trump’s undisciplined behavior surely cost him consideration from some of the undecideds — particularly suburbanites. How can he claim credibility in promoting law and order when he clearly couldn’t follow agreed upon debate rules? He behaved as if he were at a NYC back-alley gang fight.

He missed opportunities with African Americans and other minority communities. He was so focused on trying to trip up Biden that he didn’t list some of his major accomplishments in that area. Also missed was a prime opportunity with his response to the systemic racism question. He could have replied, “Yes, unfortunately there have been elements of what could be called systemic racism in our history — take a look at the roots of the Democratic party. It was founded on racism, etc.” He could have then ended with the zinger, “And Joe, you and other Democratic party elites eulogized the former Grand Wizard of the KKK!”

Hopefully, enough of us will plug our nose and vote on policy rather than personality.