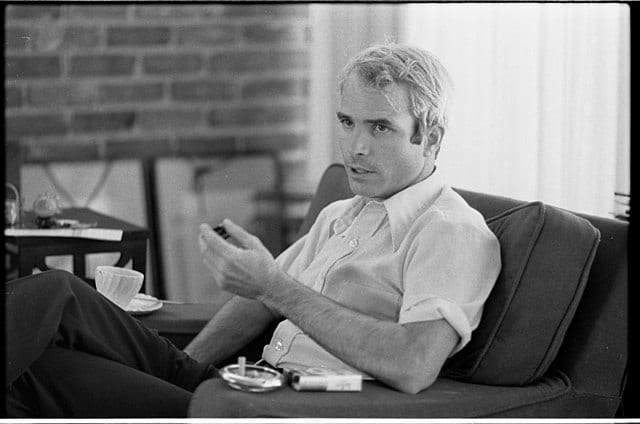 John McCain’s exit from life and politics has commentators of all sorts falling into interpretive contortions.

It was McCain’s gift, springing from personality and life experiences, to antagonize and enrapture, to confound and excite, often at the very same moment. He was neither wholly one thing nor entirely another: neither hardline “conservative,” nor “establishment” dupe; neither the Selfless Public Servant Incarnate nor the loosey-goosey adherent to some individualistic code.

I admired and twice voted for the man. Even in not-infrequent moments of disagreement, I took care to cut him some slack. I will tell you why. He was conspicuously, according to my estimate, two distinct things in short supply today: a serious man and a hard-core patriot. If you can’t salute those particular attributes, which ones can you salute?

His moral seriousness, embodying a commitment to generosity, decency, and right actions, hid behind a mask at times. Despite his physical sufferings as a prisoner of the communist North Vietnamese, McCain was by most accounts a hoot to be around. He didn’t mind a little irreverence — a trait I see as stemming, plausibly, from his deep personal acquaintance with authority, particularly of the military sort. The media for a time ate up all this irreverence with a spoon.

No wonder: There was no Savior of the Nation grandiosity about Sen. John McCain. A man who could laugh at himself — who could, for instance, kid about the effect of Krispy Kreme doughnuts on his physical profile — was entitled to some measure of celebrity. He was a different kind of Republican, we were notified — open-minded, friendly, even slightly progressive.

With such press notices, he had to be at least a little pleased. Yet not so pleased as to lose his understanding of public service as contractual in nature. The voters had sent him to Washington, D.C. They deserved the best service of which he was capable. That implied the duty of serious attention to public concerns.

Of all public concerns, that which chiefly engaged McCain’s attention was national security, underwritten by military preparedness. This was to be expected of a third-generation Navy man. His father and grandfather, as all the obituaries have noticed, were four-star admirals. A sense of duty, and of gratitude, comes embedded in such a legacy — a sense of appreciation for the sacrifices of others, a realization of the necessity for sacrifices still to come.

Every reader knows of McCain’s barbaric treatment by his Vietnamese captors — a point of which Donald Trump disagreeably made light during the 2016 campaign, claiming personally to like “people who didn’t get captured.” McCain sustained tortures barely describable — in part, I guess, for the crime of displeasing an entrepreneur safe at home, attending to business; mostly, however, for the sake of loving America too much to shame her with submission to tyranny and cruelty.

Love of country, in our time, may be the least fashionable public virtue on public display, and commitment to freedom a relic of an exasperating history dominated by white male patriarchs, slayers of Indians, enslavers of blacks. The John McCain who fell into Vietnamese hands while defending freedom knew better and, throughout his latter career, never gave over his faith in America as the primary carrier of the freedom virus. He offended many in public life by his advocacy of strong, interventionist policies abroad, meant, basically, to reinforce freedom in America itself. He constantly advocated such military spending as seemed requisite to the entirely legitimate (it would seem to me) goal of military predominance in a world teeming with screwballs and America-haters.

There seems ample room to debate the wisdom of this American intervention or that one without discarding the overriding wisdom that projection of national strength warns the screwballs and America-haters to keep their distance. Because if they don’t, you know what? They’ll run eventually, and head-long, into the heirs of John McCain — lovers, like him, of freedom; imitators of his worthy example; telling foreign enemies, in McCain-like tones of defiance, just where they can get off.