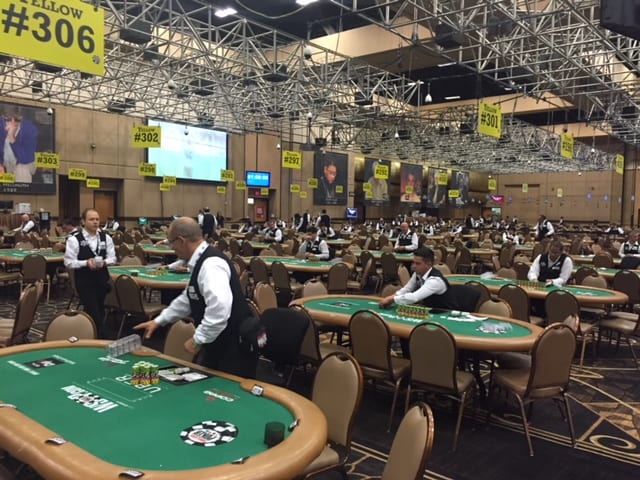 Welcome to my new column for The American Spectator examining poker and gambling both from the regulatory and recreational angles.

I have been involved in the poker industry for more than a decade as a player and writer, becoming hooked on the game — like so many others — after amateur player Chris Moneymaker won the World Series of Poker in 2003 and online poker grew exponentially. My upcoming book, Vegas or Bust: A Family Man Takes on the Poker Pros, examines how poker changed between 2006 and today after Congress passed the Unlawful Internet Gambling Enforcement Act as I also made my own run at poker glory in 2016 — this time with a family in tow.

Pennsylvania recently became the fourth state to legalize some form of online casino gaming as others consider following suit. But there is also movement afoot at the federal level to take away states’ rights to legalize the games. I’ll keep an eye on those issues in 2018.

But let’s focus today on the fun side of the game with the early disclosure of the 2018 World Series of Poker schedule. Usually released later in January, Caesars Entertainment surprised players and aficionados by announcing the schedule in December. “With today’s announcement, we hope there is enough time to adjust your holiday wish list,” said WSOP tournament director Jack Effel when the schedule was disclosed.

If that holiday wish list included a record number of bracelet events with more recreational and pro-friendly buy-ins and larger chip stacks, then we should dub Effel Santa Claus.

The 49th annual WSOP will run May 29 through July 17 at its usual home of the Rio All-Suite Hotel & Casino just off the Las Vegas Strip.

Recent popular branded events such as the Colossus (lower buy-in and multiple flights to create a massive field), Millionaire Maker (winner is guaranteed $1 million), and Monster Stack (double chip stack) will return, and as the Main Event gets underway earlier than usual — July 2 — Caesars plans to host a number of events concurrently to give players more options after they bust out of the Main or fail to secure their seat.

That is obviously a shrewd move by Caesars to generate more profits, but most players probably appreciate the opportunity for more poker action. The halls of the Rio convention center tend to become a ghost town in the waning days of the WSOP each summer as the Main Event field dwindles. This move should keep both the cash game and tournament action hopping until the end.

The $1 million buy-in Big One for One Drop returns in 2018. Of that buy-in, $111,111 from each player goes to the One Drop Foundation, which helps provide clean drinking water to underdeveloped nations. Since Guy Laliberte, founder of Cirque du Soleil, worked with the WSOP to start this event — and one with a lower buy-in during odd-numbered years — in 2012, the one drop tournaments have raised $14 million for the foundation.

You can view the entire schedule here.

Most tournaments require an investment of four figures, but the WSOP still offers plenty of options for players of the more recreational bent. The ol’ steady $1-$3 NLHE cash games will run around the clock, in which most participants buy in for around $200, and the daily deep-stack tournaments, with their buy-ins all under $250 each, will return in 2018. For a small investment, you can win a prize in the five figures. And if you want to try your hand at some of the $1,500 and higher bracelet events without plunking down a large amount of cash, you can play in the single-table satellites. For $175, for example, you can try to best nine other players to win $1,500 in tournament buy-in chips.

Now that Caesars has released its WSOP plans, we await word from the other venues in Vegas that offer concurrent tournament series  — The Venetian, Aria, Wynn, Planet Hollywood, Binion’s, Golden Nugget — on how they plan to meld their schedules. As is the case every summer, there will be plenty of poker options for every skill level all across the Las Vegas Strip and Fremont Street.

The WSOP is often referred to as summer camp for poker players. I sometimes dub it Disneyland for poker players. It’s certainly an exciting time because it’s that one time of year where everyone worth their salt in the game descends on a single location to test their mettle. If you just enjoy the game — whether pro or amateur — it’s a blast because of all of the passion surrounding the WSOP, the tournament event that made poker popular and continues to ensure its longevity.