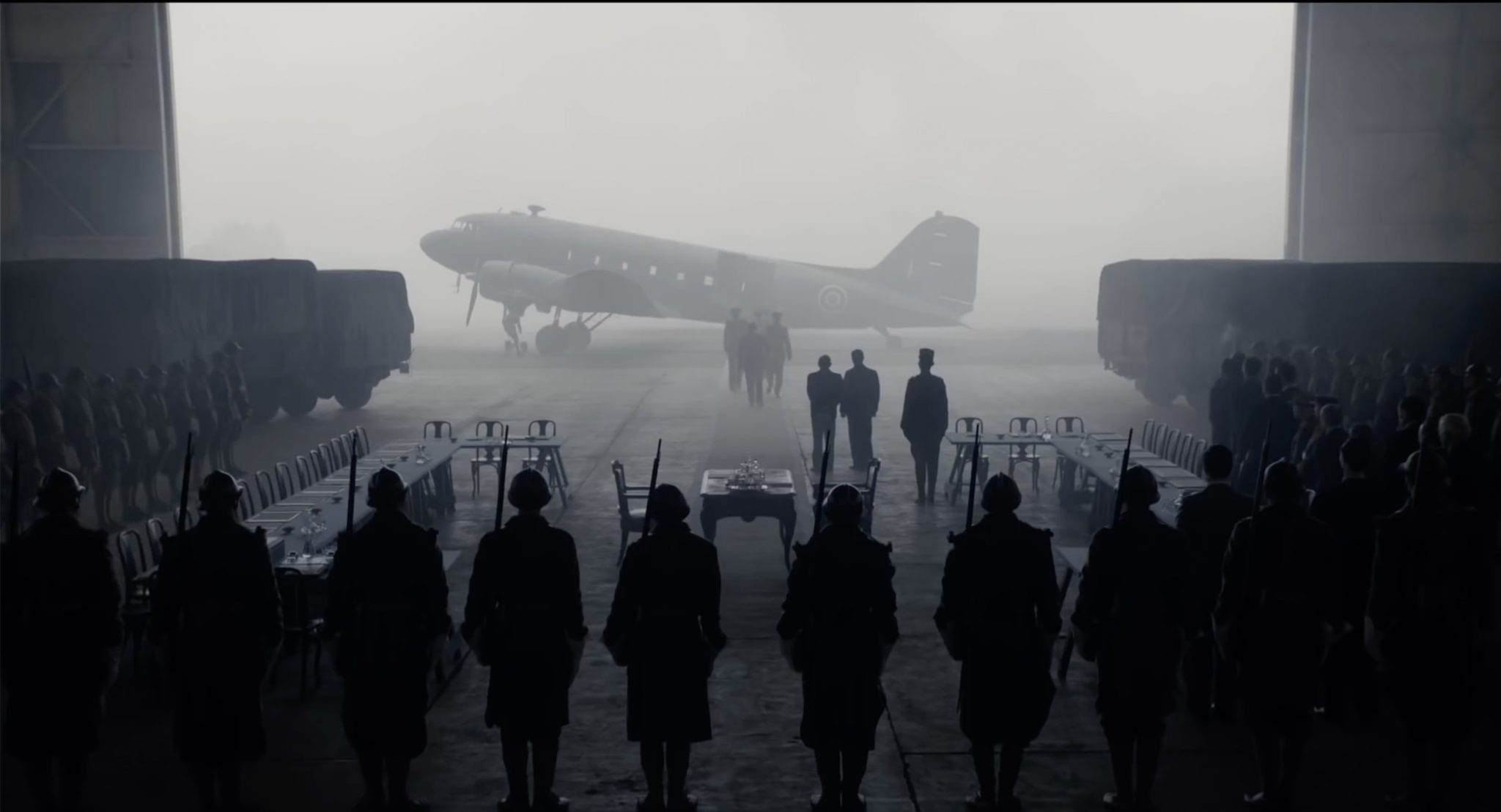 It is now impossible for us to watch a movie like Darkest Hour, or to contemplate the colossal historic presence of Winston Churchill, without the benefit of hindsight. He was right when almost everyone else was wrong. He led his country through great suffering to victory and so is remembered as a great man. But he was also lucky. It could so easily have turned out differently; he might have led his country and the empire only to ruin, in which case he would now be remembered as a fool and a bungler, if not one of history’s villains. The virtue of Darkest Hour is that by showing Churchill (Gary Oldman) as having been full of doubt and hesitation as to the course about which he was outwardly so confident as to brook no compromise, it captures some of that feeling of the looming failure in the effort whose success we would otherwise be tempted to regard as merely a foregone conclusion — which nobody at the time could or would have done.

But the film’s director, Joe Wright, and screenwriter, Anthony McCarten, seem to me to have taken this idea to an unfortunate extreme. Some attempt at simplification of complex political countercurrents was inevitable if they were to win and keep an audience, but too often they only have recourse to cinematic cliché bordering on caricature, particularly in the case of Churchill’s main Conservative adversaries, Halifax and Chamberlain (Stephen Dillane and Ronald Pickup respectively), who are as opaque as the movie Churchill is transparent — as opaque as any movie bad guy whose only function it is to submit himself to being vanquished by the appropriate movie good guy.

I think they would have made a much better movie if they had done things the other way around and shown us Halifax and Chamberlain, and with them the considerable British constituency they would have represented in 1940, from the inside and shown Churchill only from the outside — as the greatness of great men should, perhaps, privilege them to be shown. Greatness is, or ought to be, something of a mystery. At any rate, this is the way people at the time would have seen him, which is what made his greatness possible. How much better, in other words, to have left the mystique of his charisma and leadership undisturbed instead of reducing it to an allegedly human but frankly rather banal scale.

But, given that that’s not the movie they made, we should appreciate the good things they have done in the process of making it. The climactic scene of Churchill’s address to Parliament is genuinely moving and gives something of the sense of what it must have been like to be there on that most memorable, in retrospect, of occasions. Both here and elsewhere, Mr. Oldman’s performance as Churchill, like that of Kristin Scott Thomas as his wife, is very fine, as are several of those in supporting roles, including Lily James as the young secretary, Elizabeth Layton, whose fragile presence goes very much against the grain of the current Hollywood prejudice in favor of feminine kick-ass toughness but who forms all the connection the great man needs with those outside the Palace of Westminster whose fates are being decided by those within it.

And that is what makes it so great a pity that the film-makers thought it necessary to include a wholly fictional scene in which the new Prime Minister, as he is being driven to Parliament, ducks out of his official car and into an Underground station in order to sound out ordinary Londoners about what they think he ought to do after the fall of France and before the extraction of the greater part of the British army from the beaches of Dunkirk. He does this at the urging of the King himself (Ben Mendelsohn), which makes it all the more absurd in my view, and as he was coming under pressure from his own party to arrive at some kind of accommodation with Herr Hitler.

This, too, gets the real-life story of Churchill’s leadership — and, indeed, leadership itself — the wrong way around. Not only did real-life Churchill never do anything of this kind, but if he had he would certainly not have encountered the kind of unanimity for fighting on that the film displays among ordinary people — including a happy, Macaulay-quoting black person whose presence here also jerks us for the moment out of the politics of London in 1940 and into those of Hollywood in 2017. Also in 1940, there would in all probability have been a majority for making a deal with Germany. It was precisely because Churchill, through the force of his own personality as a leader, supplied his country with the fighting spirit which had been lacking up until that point that we now remember him as a great man.

Churchill’s own words, uttered at his 80th birthday celebration nine years after the war ended with the victory he promised, should not be taken at face value. “I have never accepted what many people have kindly said — namely, that I inspired the nation,” he averred. “Their will was resolute and remorseless, and as it proved unconquerable. It was the nation and the race dwelling all round the globe that had the lion’s heart. I had the luck to be called upon to give the roar.” For that kind of modesty is also part of what it means to be a leader. By giving the credit to those who follow you — or, as Shakespeare’s Henry V does after the battle of Agincourt, to God — you show that magnanimity (literally “largeness of spirit”) which induced people to follow you in the first place.

Movies about historical events always tell us more about the time in which they were made than they do about the time in which they are set. Though not intended and, so far as I know, hitherto unrecognized, there is an interesting parallel in Darkest Hour between the (fictional) Conservative-led government of 1940 and the (actual) Conservative-led government of today. See, for instance, the editorial in the Daily Telegraph headed: “The Tories don’t know what kind of Brexit they want. They aren’t showing real leadership.” The editorialist goes on to ask, rhetorically, “What is wrong with the UK Government? Where is its courage? The politics of the moment are complex, for sure, but Theresa May governs with the mandate of both a referendum and an election victory. If national consensus appears to be lacking, it is the job — the duty — of the Government to build one.”

That, as it happens, is exactly the job that the real-life Winston Churchill took on and succeeded at long before there seemed any realistic prospect of the victory that he promised in the great speech to Parliament that is the movie’s climax and that consensus ultimately led to. It is also the real reason why many still regard him as the greatest man of the 20th century. As a military leader his record was decidedly spotty, but as a political leader it was unparalleled. That Darkest Hour forgets this and instead portrays him as acting only after setting up an impromptu focus group in a railway carriage is, as the Telegraph editorial suggests, symptomatic of a larger cultural loss of memory as to just what real leadership involves — in a democratically governed country as much as in any other.