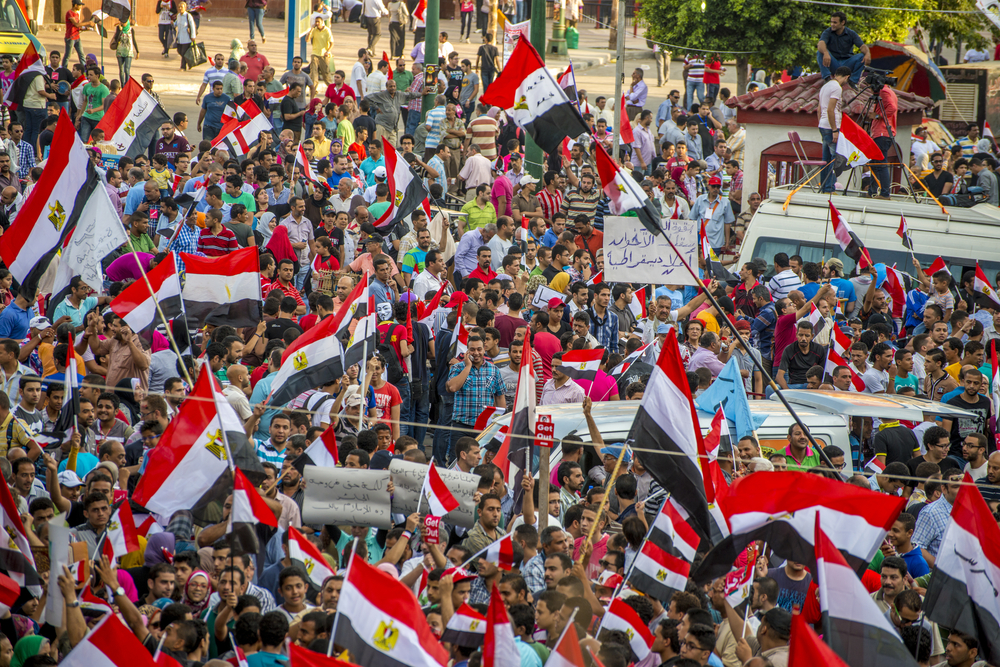 The thesis of Cynthia Farahat’s The Secret Apparatus (Bombardier Books) is that the Muslim Brotherhood, an organization founded in Cairo in the 1920s by an Egyptian, Hassan al-Banna, is the principal force behind the modern Islamic campaign for world domination.

Like the Communist International before it, Farahat explains, the Brotherhood has law-abiding branches across the umma, or lands of Islam, as well as in non-Muslim majority countries (including the U.S.).

As such, it founds, finances, and directs terrorist organizations; infiltrates its target countries’ institutions, notably in the security and foreign-policy areas; and uses “soft power” — education, charitable works — through sympathetic organizations to spread its message of peace and brotherhood, on the condition that these be on Islam’s terms. “Islam is the solution,” was al-Banna’s default slogan, just as it was that of the ayatollahs who provided the theological guidance for the movement that overthrew the shah.

The references to the Comintern and to the Iranian Revolution point to the fact that Islamism, the bending of Islam to achieve political goals, is a reaction to modernity. The modern world had been evolving, in its many European and Euro-American varieties, long before traditional societies in other regions began to awaken from their stupor.

Farahat demonstrates that Islam is at war with itself perhaps even more than with the rest of the world. Egyptian strongmen from Nasser to al-Sissi were with the Muslim Brothers before realizing that the Brothers expected them to answer to them.

The Great War had, among many other consequences, the loosening of colonial bonds that, to put it in Kiplingesque terms, were meant to bring “lesser breeds without the Law” to a higher plane of faith and civilized life. (Contrary to what is often assumed, the verse is meant to warn Englishmen and Americans of their duty, lest they resemble less enlightened — and blessed — peoples.) The European near-death experience of 1914–1918 led the Old Continent into a century of “totalitarian temptations” that took their own twisted forms in backward places like Russia and the Orient.

In the umma, the discomfiture and weakening of the European powers (whom Muslims thought of, as they still do, in religious categories — Jews, Christians, or heretics, infidels all) was viewed as an opportunity to reverse the humiliations of recent decades, when Christendom had been on the ascendant. In a sense, the final humiliation was the fall of the Ottomans, who housed the last caliphate (supreme command center of Islam) in Istanbul. But, henceforth, it would be revenge and revival.

The Muslim Brothers offered one approach to the new political environment, but it was not the only one available. There were constitutionalists, monarchists, liberals. The Brothers’ idea, however, had the advantage of forceful, fanatical simplicity. Their plan was to wage jihad, holy war, on all fronts, by all means, until a reestablished caliphate provided the political-social conditions by which the solution — Islam — would be not only available but unavoidable.

Little wonder the Brothers were fascinated by the Comintern, for what they saw was a program very similar to theirs and an organizational structure that appealed to their militant and fanatical psychologies. Communists used to joke, After the revolution, we’ll all have strawberries and whipped cream (a dig at the toffs at Wimbledon). The straight man says, But I don’t like strawberries and cream. Rejoinder: After the revolution, you’ll get it and you’ll like it. Hahaha.

With variations depending on place and period, the communist movement developed parallel societies in which people lived at once apart from the larger society and yet within it, for obvious reasons of necessity. There were the secret cells of communist movements, the indoctrination schools, the preparations for armed insurrection or terror campaigns, the legal and deceptively peaceful and law-abiding fronts, from the official political parties to civic or justice-sounding organizations.

The Muslim Brothers organized in a comparable way, with legal political parties when possible, clandestine ones when not. They were whenever possible very active in social and charitable work. And al-Banna organized, in the 1930s, a “Secret Apparatus,” which was dismantled by the Egyptian police but never completely went away. In fact, according to Farahat, it is very much still around and is the true central command of the Muslim Brotherhood.

The Brothers, as Farahat explains, became perhaps the most pervasively influential organization across Arab Islam and beyond. In non-Arab Iran, the center of Shia Islam, which for centuries has been viewed as a dreadful heresy by the Sunna branch of the religion that most Arabs (and south Asians and Africans) follow, the Brothers made an arrangement, covered by appropriate legal and theological arguments, with the ayatollahs to, in effect, work together against the non-Islamic infidels.

It is not news that we are at war with Islam — have been for a long time. Afghanistan and Iraq provided the most recent, and not necessarily the last, battlefields. Farahat demonstrates that Islam is at war with itself perhaps even more than with the rest of the world. Egyptian strongmen from Nasser to al-Sissi were with the Muslim Brothers before realizing that the Brothers expected them to answer to them.

Farahat’s criticism of American foreign policy follows from the demonstrated abuse of the democratic principle by the Muslim Brothers and their affiliated parties, which often go by names like Justice and Welfare. These in fact are accurate descriptions of what they seek and do, and they help explain their appeal to ordinary voters.

The difficulties begin with their definitions of justice and democracy. The Brothers have been quite honest: It is okay to win an election, but after that it is neither necessary nor desirable. As to justice, it is as they interpret the Koran, and an independent judiciary would be an oxymoron.

These attitudes are not traditional to Islam. They are copied from European totalitarianism. Traditional Islamic society, even in Arab lands, was certainly authoritarian in the normal sense of the term, but not despotic or tyrannical in the modern sense. Students of Islam such as Bernard Lewis and Elie Kedourie understood this very clearly and bemoaned the degree to which U.S. foreign policy failed to appreciate it.

READ MORE from Roger Kaplan: Missile Strike in Poland: Bombs Away — or Astray?

Farahat’s dismal view of the shortcomings of American policy are widely shared: We wasted lives and money while deliberately eschewing victory against an enemy whom we misidentified because we politely refused to call him by his name. Her thesis would be stronger and clearer had she substituted for her police-blotter examination of al-Banna and his successors a plain historical overview of how jihadist terrorism came to appeal to uneducated, perversely indoctrinated, or simply bullied young Muslims.

There were, still are, competing traditions, of which Farahat, who had to leave her native Egypt due to her advocacy of liberal democratic change, is surely aware but oddly never refers to. Modern jihadism, she explains, was given a boost — if it was not invented — by harebrained German and Ottoman strategists during World War I as a weapon to use against the British Empire in what was still called the Orient or Near East. People like al-Banna were the inheritors of this crude manipulation, but there were other options, such as the one sought by T.E. Lawrence and his Arab allies, who had, among other qualities, a deep and sympathetic appreciation of the Zionist movement.

U.S. policy followed in the missteps of the German–Ottoman strategy, Farahat shows, by supporting the wrong side during the anti-Soviet war in Afghanistan. We aided the allies of the Muslim Brotherhood instead of tribal groups closer in spirit to the kinds of men Lawrence championed. We defended the Muslim Brothers’ victory in the 2012 election that we more or less forced upon the admittedly rotten Hosni Mubarak government. Once in power, the Freedom and Justice Party, led by Mohamed Morsi, proceeded to do exactly as expected of the Brothers, namely, to consolidate their rule and crush all opposition, until one of their own, Abdel al-Sisi, moved against them.

And we are still reaping the whirlwind. The way we handed Afghanistan back to the Taliban scarcely needs recounting here.

The Muslim Brotherhood’s pernicious, fanatical influence throughout the world is known. The fact that it reaps whirlwinds of its own (al-Qaeda, the Taliban, ISIS, intra-devouring monsters) is in keeping with modern totalitarian practice (Stalin shooting the old Bolsheviks, Hitler massacring the Brownshirts, Mao persecuting the “anti-party cadres”).

The Muslim Brotherhood’s alliance with the grotesque Hamad el Tanni family that rules Qatar, supports the Iranian khomaniacs, and corrupts international soccer (which was easy) is no mystery. Farahat is perfectly right to remind her readers of who these people are and where they come from. It may be regretted that her police-blotter approach to the Brotherhood fails to convey clearly the epic failure of Arab politics after the Great War, as well as the witting and unwitting abetting of this failure by shortsighted U.S. and European policies.

But a writer should not be reproached for not writing the book she did not want to write, and this one will be a useful addition to our intellectual armament in the “long war,” which, as she surely knows, is far from over.