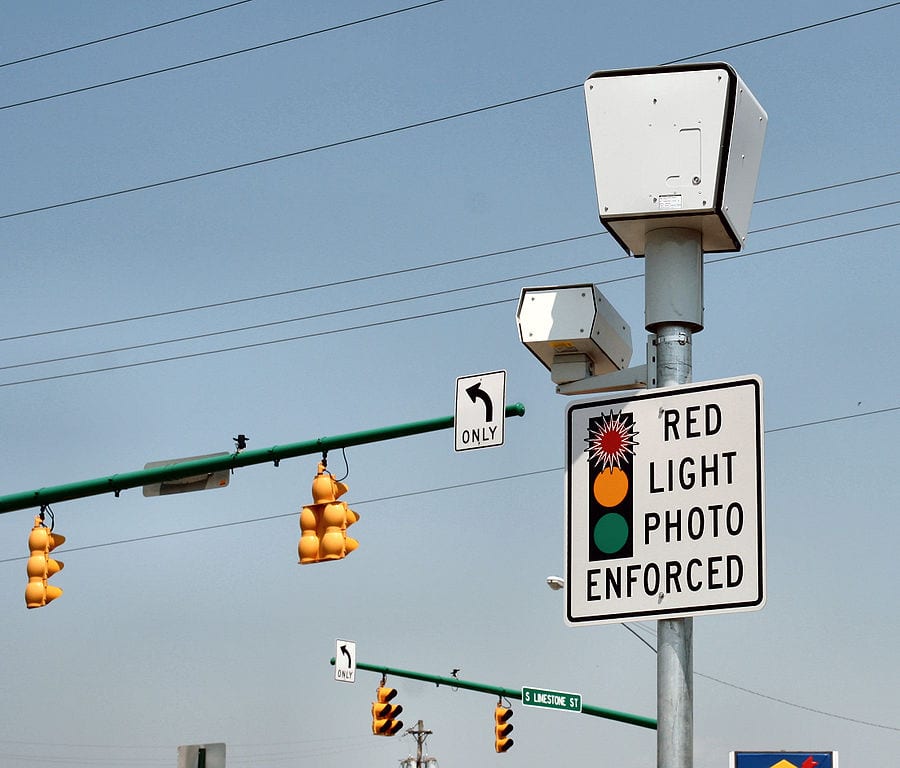 More Politics
Sign Up to receive Our Latest Updates!
Register
Hot Off
The Press
Politically Correct
The PC Direction of the GOP
by George Neumayr
Drawn to Humor
Biden’s Word Salad
by Patrick Cross
Ben Stein's Diary
Biden Is the Stuff of Nightmares
by Ben Stein
In Memoriam
RIP Mickey Gilley
by Larry Thornberry
Buy the Book
Dick Armey’s Behind-the-Scenes Take on Congress
by Peter Roff

For cities seeking money, red light cameras appear to be an attractive option. In exchange for letting camera businesses keep some of the ticket fines, cities get a source of revenue without needing to have officers watching intersections. The only problem: there is very little evidence that suggests that red light cameras are making intersections any safer. And yet municipalities continue to push ahead, seeking revenue-generators that are not (technically) taxes. To remedy this, legislators in the Ohio House of Representatives have passed legislation that would withhold state funds from these localities in a dollar-for-dollar manner equal to revenue gained from red light cameras.

Sometimes, cities betray the revenue-raising motivation behind red light cameras with their actions. Back in 2014, the Chicago Tribune caught Chicago officials lowering the threshold for yellow lights below the city’s minimum of three seconds. In doing so, Chicago netted 77,000 more tickets from the shorter yellow light and $7.7 million more in fines. The Tribune also found that the implementation of red light cameras increased accidents by 5 percent.

Chattanooga, Dallas, Nashville, and Lubbock had all previously been caught shortening yellow light times below the legal minimum to increase tickets. Mounting evidence suggests that short yellow light times, particularly mixed with red lights, make for a risky proposition, encouraging drivers either to slam on the brakes or speed through a light. They are also unfair — short yellow lights can create a “dilemma zone” where drivers can be caught in a situation where they can neither slow down in time nor speed up fast enough to avoid a red light ticket.

Though cities see red light cameras as a means of “generating revenue,” that revenue does not come out of thin air. Red light tickets are effectively a tax, and a regressive one that hits poorer residents harder at that. Fines can be justifiable if they advance public safety, but that does not appear to be the case with red light camera tickets.

Some of the most ardent supporters of red light cameras are, unsurprisingly, the companies operating them. Less than 20 percent of money from red light camera tickets goes to municipalities; the vast majority goes to the large private companies running the cameras. Possibly Ohio legislators’ forward-thinking efforts to end red light cameras comes from their own local experiences — the chief executive of the vendor of red light cameras to Ohio’s capital, Columbus, was caught attempting to funnel $70,000 in bribes to city officials.

Ohio’s action would hit cities right where it hurts — in the profit motive. If cities truly believe that red light cameras are a matter of public safety, they should have no problem with continuing to operate them even when they do not receive any revenue from them. In all likelihood, they will not, proving that it was always about the money.

Rep. Michael Ashford, a Democrat from Toledo, called Ohio’s proposal to cut off funding for red light camera cities “egregious and mean-spirited.” Not coincidentally, Toledo has previously pushed back strongly against attempts to end red light cameras. But Ashford is incorrect: the only egregious and mean-spirited thing is selling a crony capitalist revenue-raising scheme that endangers drivers and imposes an underhanded tax on residents. Other states should follow Ohio’s lead and remove the revenue motive from red light camera cities.