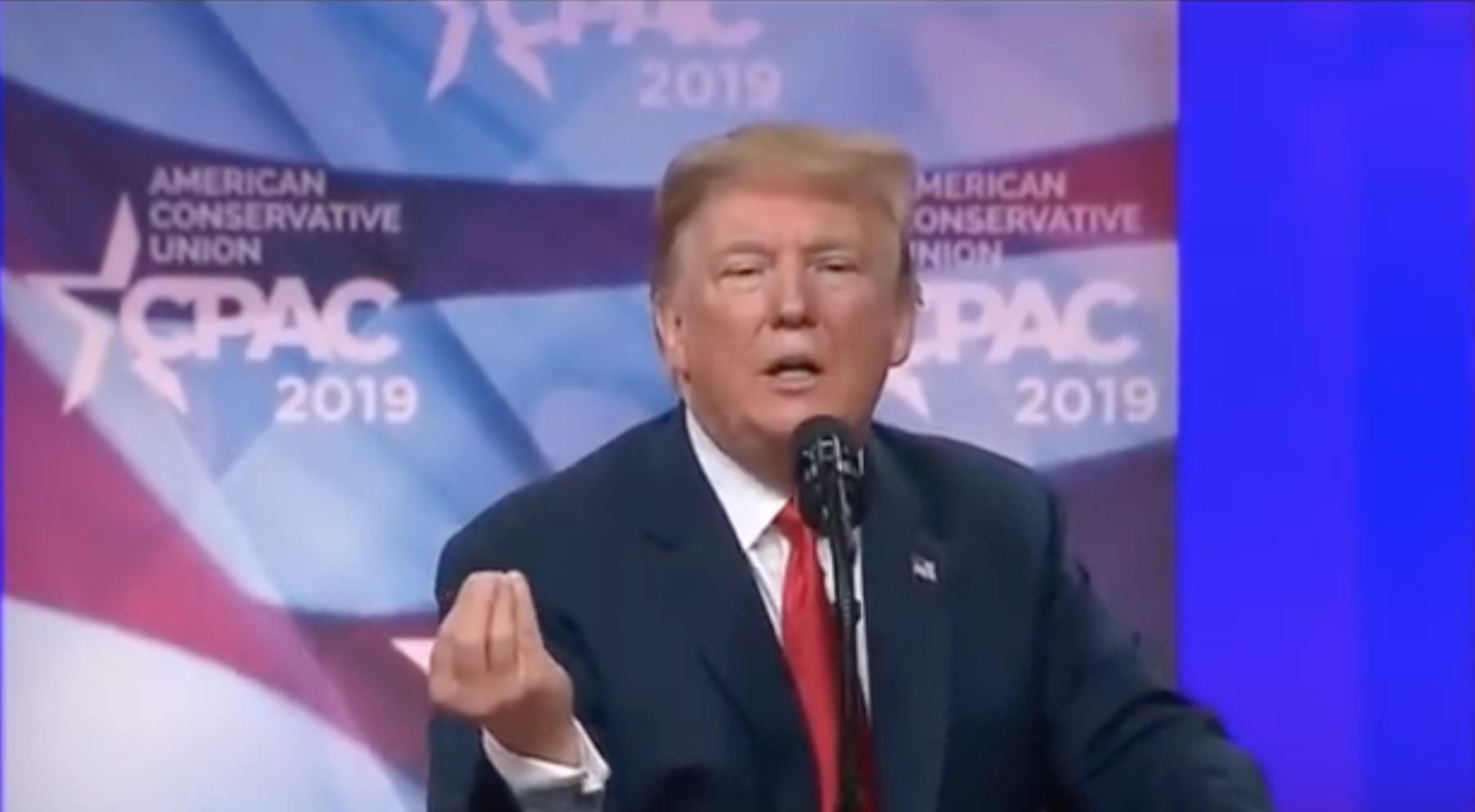 What an extraordinary few days. With conservatives at CPAC set to take on socialism.

Thousands of conservatives filled the Gaylord National Resort & Convention Center at the National Harbor in Maryland for the annual gathering of the Conservative Political Action Conference. There were over a hundred events crowding the calendar, the focus the deadly serious issues of our day, with socialism at the very top of the list. To list a few of the topics discussed:

I could go on. All of this punctuated with appearances and quite serious speeches or conversations from both the President and Vice President of the United States, the President’s Director of the National Economic Council Larry Kudlow, and media conservatives like Laura Ingraham, Mark Levin, and the Wall Street Journal’s Kim Strassel. Plus a number of senators and congressmen, including Texas Senator Ted Cruz, Utah’s Senator Mike Lee, and Representatives Mark Meadows and Jim Jordan.

In short, it was a stellar several days organized by the American Conservative Union’s Matt Schlapp and his team.

But over in the liberal media? Here’s what CNN political analyst Julian Zelizer headlined:

Among other things, Zelizer said this:

The CPAC that has been on display this week is a far cry from what some of the more serious conservatives of the 1970s had in mind. The event has become a political circus filled with conspiracy theories, cranks and far-right extremism. The past few days have featured speakers from Fox News and the Trump world spewing out the most outrageous statements they could think of making.

Say what? I have no idea if Professor Zelizer was actually there in real time or not. But to say something like this that is so laughably, provably untrue only underscores that various figures on the American Left would rather ignore reality than have a serious discussion of issues. Does CNN’s Zelizer really believe that the presence of CNN host Van Jones on center stage at CPAC for a quite serious and respectful conversation about criminal justice reform was a “political circus”? Really? Really?

Not to be lost sight of here is that the Democrats are supporting out and out socialism. And one suspects that the fact CPAC conservatives — not to mention President Trump — are more than prepared to take on that fight is what so disturbs the Left.

That the fight against socialism by conservatives is on was abundantly clear at CPAC. As Breitbart reported, the President’s chief economic adviser Larry Kudlow — he a former Reagan aide — said as follows:

Kudlow called on the audience, their friends, and their neighbors to “put socialism on trial.” He said:

“I don’t want us to stand idly by. I don’t want to let this stuff fester. I want it challenged, I want it debated, I want it rebutted, and I want to convict socialism. President Trump has already started this leadership,” he said before reciting some of the president’s rebuke of socialism including the State of the Union Address affirmation, “tonight we renew our resolve that America will never be a socialist country.”

He additionally cited the president’s remarks in Florida recently against socialism’s promises of a better future, when in reality it brings back the darkest chapters of the past.

“I ask you to join president Trump and me and the rest of us to put socialism on trial and convict it,” Kudlow repeated.”

Doubtless it was statements like that that outraged CNN’s political analyst.

Then there was the reaction from Never Trumpland. Mediate reported that over on MSNBC “GOP strategist Evan Siegfried lamented Friday that the Conservative Political Action Conference has, traded away intellectualism for provocateurs and right wing firebrands.” Say what?

Apparently Siegfried is concerned about Turning Point USA’s Charlie Kirk and Candace Owens, both of them doing outstanding work in standing up for conservative principle. But, in the typical style of Never Trumpers, Siegfried simply ignored the presence on stage of former and current GOP governors, a baker’s dozen of U.S. Senators and Congressmen, HUD Secretary Dr. Ben Carson, Labor Secretary Alex Acosta, Commerce Secretary Wilbur Ross, Israel’s former Ambassador Dore Gold of the Jerusalem Center for Public Affairs, and author and Asia expert Gordon Chang. Also on stage was the Polish Ambassador to the United States and a member of the European Parliament.  (The senators, by the way, besides Ted Cruz and Mike Lee, included Lindsey Graham, Joni Ernst, Kevin Cramer and Josh Hawley, now apparently classed by Siegfried as “provocateurs and right wing firebrands.”)  These names only scratch the surface of a longer list of journalists and think tank policy experts who held center stage for a speech or panel.

Then there is GOP strategist Rick Tyler, once an aide in the Ted Cruz presidential campaign — that would be the self-same Ted Cruz who was the featured CPAC guest in a conversation about border security. With Tyler saying on MSNBC of CPAC, as reported by RawStory:

“It used to be the confab of conservatives who would get together once a year but it’s not CPAC anymore — it hasn’t been since 2016. It’s now Trump-pac and should be TPAC.” Tyler added:

“The people there talk about being pro-tariffs, anti-justice, anti-law enforcement, anti-immigrant, anti-Muslim, pro-Russia, pro-autocrat,” he continued. “It’s unrecognizable what Donald Trump has done to the party and what he’s done to the conservative movement — it’s a shame.”…

“Rest in peace,” he lamented. “No, it’s over. The problem is that the Republican Party has no grounding governing philosophy anymore because they’ve signed on to all these things as I just mentioned that were antithetical to the conservative movement.”

Huh? I was at CPAC and I saw every evidence of conservatives with a solid “grounding governing philosophy” of conservatism. As was true of all the people listed above who took the stage. No one I heard or spoke to was “anti-immigrant.” Anti-illegal immigration — yes. Does Tyler seriously believe in open borders? This nation, as CPACers are well aware, is 100% composed of the descendants of immigrants. CPAC attendees — like Ronald Reagan and Donald Trump — believe in the decidedly un-radical idea that there is a process to immigrate into this country.

Indeed, President Trump quite specifically said this at CPAC — there is a legal process to immigrate. It needs to be followed and respected. There is nothing remotely “anti-immigrant” in saying that.

Not to mention that the person who spoke about illegal immigration and the crisis at the border was Ted Cruz… Tyler’s former boss who is, yes indeed, the son of a legal immigrant.

Bizarrely, Tyler also blasted conservatives for being “pro-tariffs” — leaving out entirely that Trump uses tariffs to fight for a free trade that is truly free and fair. If another country levies a tariff on an American product — and the U.S. doesn’t respond equally? That is not “free trade” — that is crazy. Apparently Tyler forgets this headline from 1983 in the New York Times:

You read that right. President Reagan, just like President Trump, was perfectly willing to use tariffs to get a better free trade deal. And as reported over the weekend the Trump strategy is clearly working.  Here is the headline from the Wall Street Journal:

Both countries could lift some tariffs imposed last year, and Beijing would agree to ease restrictions on American products

And by the way, the use of tariffs is literally as old as the Republican Party — a staple of the political careers of Republicans with names like presidents Lincoln, McKinley, and Coolidge.

Last but not least, no one that I heard or spoke to at CPAC was “anti-Muslim.” Anti-radical Islamist? Yes. Anti-Muslim? No. Neither was anyone there that I heard remotely “pro-autocrat” or “pro-Russia.”

The real hard fact here is that CPAC 2019 was filled to overflowing with Americans from all over the country who came and spent hours on end listening to — and participating in — quite serious discussions from a very long list of serious conservative intellectuals, policy experts, governors, senators, congressmen, journalists, and activists. Under discussion was an equally very long list of issues confronting America today. Were Trump supporters in evidence? You bet. There were red hats all over the place. Why? Because they believe in all the things conservatives always have believed — and that President Trump, like President Reagan before him —  has supported. That would include things like appointing conservatives to the Supreme Court and the appellate and district courts, American energy independence (drilling for oil and gas in the Arctic National Wildlife Refuge), tax cuts, deregulation, opposing abortion, defeating radical Islam, and so much more.

Yet in a clearly deceptive manner, the CPAC critics deliberately misrepresent what and who participated at CPAC. The critics from the Left fear the attack on socialism. The Never Trumpers are massively infected with TDS — Trump Derangement Syndrome. If Donald Trump supports the very same philosophy and issues that Ronald Reagan supported — well, you can now count them out.

As CPAC 2019 has vividly illustrated, the fight against socialism — and TDS — is on.