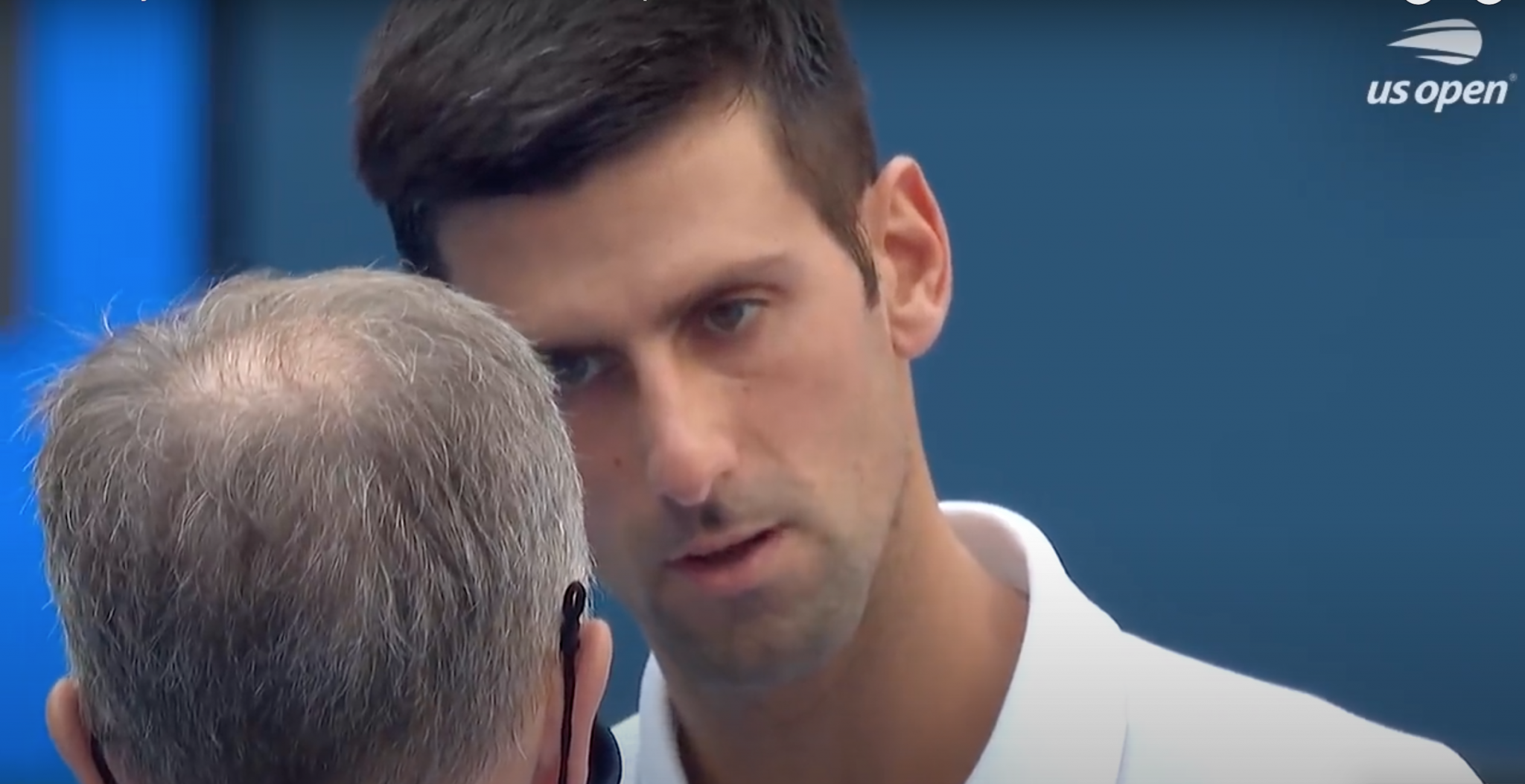 If a pitcher steps off the mound after giving up a two-run homer that blows his lead and throws a ball at an umpire, you can expect they will eject him. You can look it up in the rules, and saying his anger made him to it or the ump did not get a concussion is not likely to make a difference.

Novak Djokovic got broken in his third-round U.S. Open match. While changing sides at 6-5 for his opponent, he whacked a ball and hit a line judge in the neck, and she — it was a she — collapsed in pain.

The relevant rule, applicable specifically to Grand Slam events, says “intentionally hitting a ball dangerously or recklessly within the court or hitting a ball with negligent disregard of the consequences” is cause for disqualification. It has been applied in the past, regardless of whether the errant shot hit a male or female official.

Tight-lipped officials disqualified the No. 1 seed in the eerie silence of an Arthur Ashe Stadium empty of spectators; and without getting metahistorical you know a man of long central European memory, like American Spectator executive editor Mr. Pleszczynski, is bound to feel the loneliness of the Serb nation, always abandoned in times of grief and danger.

But he is a Californian by birth and upbringing and he does not need to be reminded this is sports not invasion and oppression, loss of land and people. There are strict rules at issue here, and one of the reasons we love sports is in fact precisely that they take place within a structure that athletes respect. Win or lose, you follow the etiquette — and the law, and you do not whine.

It was by no means unprecedented, though for a top seed in a Slam, it was a shocking first.

In response to the typically asinine questions that seem to be the rule at tennis press conferences, Pablo Carreño Busta, who advances by default to the quarters, noted the obvious:

Q. Did you think Novak should have been allowed to continue playing, given that he said it was not intentional that he hit the linesperson?

PABLO CARREÑO BUSTA: No, of course I think this was not intentional. I don’t think that any one of us, of the players, do this kind of thing intentional, you know. It’s just the moment. It’s just I broke him the serve, and, you know, he throw the ball.

I think that it was bad luck, no? You cannot do this, but of course I think that Novak never, never wants to hit the line umpire.

Q. But did you think he should be allowed to continue playing and just be fined?

PABLO CARREÑO BUSTA: Well, the rules are the rules. These kind of things never likes. The referee and the supervisor do the right thing, but is not easy to do it, no?

Carreño Busta, perhaps, expressed best the sheer sadness of the dilemma, rules and split-second mistakes that break them and how you assess the person on the spot. He said Djokovic is a great human being and would find the time and place to explain himself: “I suppose that he will explain the moment, no? Of course it’s a tough moment for him.”

Well, just bad luck to the line umpire. I’m so sorry about that, because it’s not the way that I wanna be in quarterfinals. I was playing my match. I was playing really good, and I was enjoying the match.

For his part, Novak Djokovic, world No. 1 and three-time winner at this event, issued a statement: “This whole situation has left me really sad and empty. I checked on the lines person and the tournament told me that thank God she is feeling ok. I‘m extremely sorry to have caused her such stress. So unintended. So wrong.”

He added an apology to the U.S. Open and his fans, noting, “I need to go back within and work on my disappointment and turn this all into a lesson for my growth and evolution as a player and human being.”