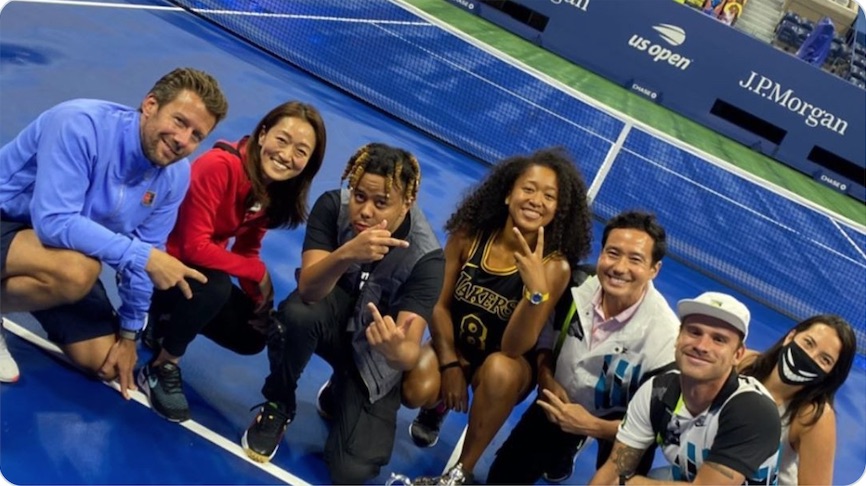 At the French Open one time not too long ago, I spied an usher whom I remembered from a previous year and said hello. He was dressed impeccably in the designated business attire, and he acknowledged the greeting courteously.

I asked what was this, people eating sandwiches in the press box and dressed like bums? Both of which had been, in my recollection, not frowned upon but forbidden. I myself was wearing a blazer and a tie and planned to snack outside the stadium during a later match. He said the rules had been removed.

Having written early in the U.S. Open fortnight about Naomi Osaka’s perhaps excusable absence of historical reference and then dropped the subject to concentrate on her playing, I deliberately avoided comments that would distract from an estimable effort by the USTA to organize and manage a tournament in difficult circumstances.

I figured, they want sports to be played in their glorious self-sufficiency, I applaud the position, and let’s look at the action. They want to put a few woke signs on the backboards, where’s the harm?

As to the fellow in the stands who was wearing a Defund the Police T-shirt, I thought why mention it and give free publicity to a slogan promoted by political goons, whose slogan taken to its logical conclusion leads to a complete breakdown of order, serial killings in neighborhoods populated by the very people whose voices the wearers of such T-shirts claim to amplify.

Miss Osaka made a point at each of her matches of wearing masks with names of individuals who met unfortunate ends in altercations with uniformed policemen; she meant to draw attention to what she takes to be a systemic problem in American society that would be addressed by a drastic downsizing of our varied and diverse police forces. This is, surely, a proposition that can be discussed, and if she wanted to quietly call attention to it, who is to say no. But I must admit that the one name I would have expected to see, that of Captain David Dorn, never appeared on one of Miss Osaka’s masks.

Let it pass, I told myself; ’tis a subject for another day. But I recognized the young man, who is reported to be romantically involved with Miss Osaka, in one of the post-tournament photos, wherein, still in the stadium and in a pose with the champion holding her trophy, he makes a crude gesture toward the camera.

There are rules governing gross behavior and language on the court, and at the U.S. Open they are applied strictly. Serena Williams was penalized at two critical moments in her storied career at the U.S. Open, in fact, for loss of decorum, in her case verbal assaults upon a linesman (a woman, as it happened) and an umpire (him a man). These cost her dearly, and in the second case there are still those who argue about whether it did not cost her the match and the championship, to the benefit of Miss Osaka.

Now we have out-of-match but still on-court behavior by a member of a champion’s supporting cast, who falls outside the scope of the rules. Had it been her coach or someone formally associated with her team, it is difficult to see how the USTA could have avoided reacting. It was Miss Williams’ coach, Patrick Mouratoglou, who kicked off the sorry controversy in 2018 when he engaged in coaching from the stands.

Sports organizations prefer discretion when private relations are concerned, so they would be disinclined to ask Miss Osaka to remind her guest to mind his manners. And we surely are not the ones to lecture a young lady who always has insisted her parents are her heroes and role models. To say anything would be disrespectful of them — impolite.

But then what was this young man doing, and she permitting him to do, if not showing contempt for — for whom? For tennis players? For those who make it possible (and profitable) for tennis players to compete? Including the men and women in blue of the NYCPD who protect Flushing Meadows?

Democracy is a fine thing, with its rights and its opportunities. Properly understood and exercised, of course, otherwise it goes in the direction my pal at Roland-Garros bemoaned. You can say vacuum-headed things about the cops; they are tougher and more considerate — of their duty to you — than your crude words and gestures. And who knows, maybe Miss Osaka, behind closed doors, gave her thoughtless friend a serious dressing down, and was too polite to do it in public. She is a tennis pro, she knows the line inscribed over the entrance of the All-England Club where a great tournament she will likely win some day is played.

If you can meet with triumph and disaster, and treat those two impostors just the same …

Does she know another famous couplet, written by the same hand? She should. And she should drill it into her young friend until he hears it:

Yes, makin’ mock o’ uniforms that guard you while you sleep
Is cheaper than them uniforms, an’ they’re starvation cheap.

This is the only reason he can indulge in foolish posing that is the opposite, if not the enemy, of the kind of work that Naomi Osaka put in to get to where he could be to watch her.