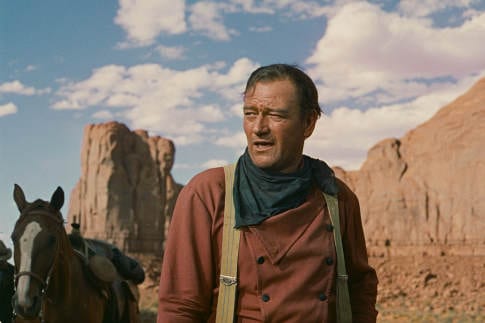 Returning to my e-pen-pal P, with his American lit seminar in Paris, France, I write him, okay, if you insist, Henry David Thoreau is a great American writer, and his insights into our frenetic materialism — and much besides — are welcome and pertinent and he writes with a fine hand. And I dig Ralph Waldo Emerson, too, his cravats and his optimism.

Thoreau — joined in this by Abraham Lincoln and U. S. Grant and many more — disapproved of James K. Polk’s war, if you want to know. And this occurs to me because the plot of Alan Le May’s 1954 novel The Searchers is driven by two men, one an ex-Secessionist who will not pledge allegiance to the restored Union, the other a young “half-breed,” so committed to their mission that they wander seven years on the wild barren frontier of Texas, conquered during Polk’s administration.

The old man, Amos Edwards — in his early 40s — seeks revenge against the savages who massacred his brother’s family, including the sister-in-law with whom he shared a suppressed passion.

The young man, Martin — barely out of his teens — wants to rescue the baby sister, the only survivor apart from her Uncle Amos of the family that had adopted him after the same horror befell his. He agonizes over the memory of breaking her heart when he slighted her baby-to-big-brother crush.

It is a mission at odds with itself. From their different perspectives, everyone in the story knows this. To defend Debbie, whom Amos cannot bear to see transformed into a Comanche, Martin is prepared to kill his adoptive uncle. Laurie, the girl young Martin left behind, wants him to give up and marry her, and finally lets herself be wooed by Charlie, who as a deputy to Ranger (state police) captain Clinton wants to arrest Amos and Martin for killing a treacherous trader, not to punish them for justifiable homicide but for form, because law and order must be served so civilization can advance.

This is also the view of the Army, reluctant use tactics that would put squaws and papooses in the crossfire. The Ranger captain loses his temper:

I’m sick and tired of war parties murdering the be-Jesus out of Texas families, then skedaddling to hide behind you yellowlegs! What are you fellers running, a damn Wild Indian sanctuary up here?

Martin himself has understood the problem:

Debbie, when at last he finds her, startles him: These are my people.

But Martin sees his mission through. And so here, I explain to P., I will not spoil the show, only say that the John Ford film, with its emphasis on the Amos character (Ethan in the movie), which Mr. Larry Thornberry discussed in these pages in days of yore, diverges significantly in the end from Alan Le May’s powerful, epic, harrowing novel.