Free the Market Capitalism,Free Market,Margaret Thatcher,Reagan,Ronald Reagan Conservatives Should Restore and Improve Reagan’s Fusionism - The American Spectator | USA News and Politics
Menu
Free the Market
Conservatives Should Restore and Improve Reagan’s Fusionism
These new right-wingers have little faith in individuals, but plenty of confidence in the government apparatus.
by Nikola Kedhi
President Ronald Reagan delivers his final televised speech to the nation from the Oval Office of the White House on Jan. 11, 1989. (Shutterstock/mark reinstein) 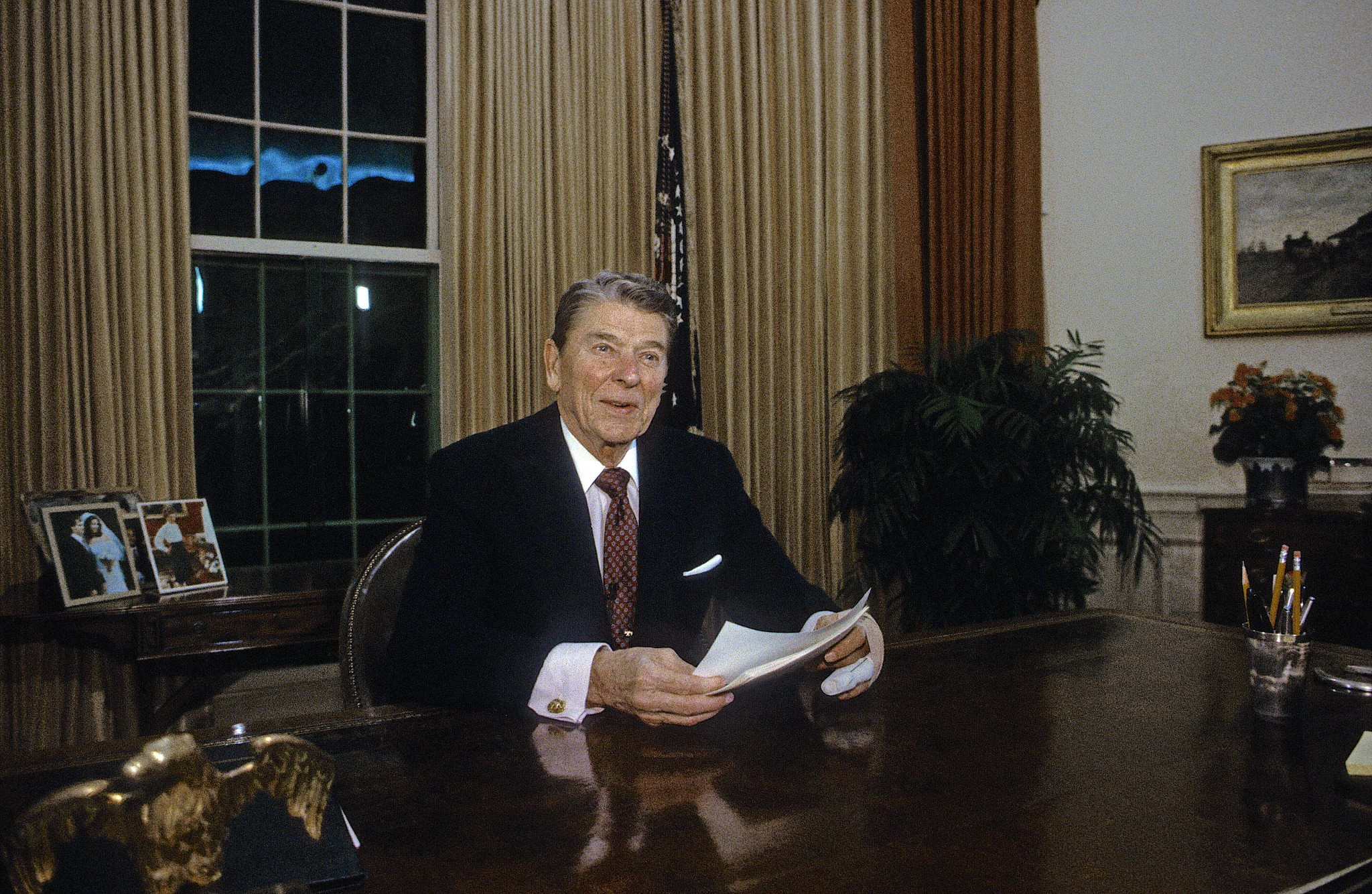 Growing up in Albania, a country still suffering from the grave wounds inflicted by communism, it was easy to distinguish right-wing principles: love for God, family, community, country, respect for culture, tradition, and history, limited government, free markets, anti-communism, tolerance for differing opinions, economic liberty, sacred individual freedoms, and inalienable God-given rights. These were the principles of the Founding Fathers of the United States — the very same beliefs that made America great in the last two centuries. Our eyes stood fixed across the ocean, hoping that one day we would have the chance to rebuild our country through the same values.

Prime Minister Margaret Thatcher’s policies transformed a country on the brink of ruin into a free and prosperous, proud, and self-reliant nation. President Ronald Reagan’s “Mr. Gorbachev, tear down this wall” was a call for all communist countries to destroy the inhumane system sustained for almost half a century and to reject the total control of all aspects of life by a few rulers. When such power is granted to a small number of individuals, the propensity for abuse, corruption, and violence is immense. The result, as my country and all communist and socialist nations have proven throughout history, is deep poverty and misery, with individuals, families, and communities deeply hurt and suffering.

Yet, there are attempts by a new Right to push successful conservative policies aside. One could be forgiven for mistaking them for staunch advocates of the illiberal Left. Both groups believe that governments should intervene more to regulate the economy, provide welfare payments, and hold back the “greedy heartless” capitalists who worship markets.

They are right in one aspect. Free market capitalism needs reform. But improvement does not come from leftist models — not when there are effective ones on the conservative side. Reagan’s fusionism worked. He and Baroness Thatcher showed that a combination of conservative values and capitalist, free-market policies work, lifting people out of poverty and providing opportunities to all. We can rebuild our economies and societies by combining classical liberal economic policies rooted in conservative values. Let us give citizens the power to fight for what they love instead of giving it to a few bureaucrats in government, regardless of how well-intentioned they are.

Conservatives, classical liberals, traditionalists, patriots, and libertarians have much in common. We need to restore this coalition in the West, not only to succeed in helping people economically but also to address the many challenges of our century. Only a united and expanded Right — from libertarians to conservatives — can lead to a stronger individual with more opportunities and choices, who in turn has the means to care for his family, property, community, environment, and nation. A right-of-center coalition that believes in freedom, family, and tradition is the only way to stop cancel culture, wokeism, and the illiberal Left.

The Right cannot stand divided or it will not be able to win the cultural and economic battles of our time. Just as communism united all right-wing factions in the ’80s, the conditions are ripe now to bring them all together. Those who talk of exclusion and censorship do not have conservatism’s best interests at heart. They mistake the dangers of left-wing progressivism and crony capitalism with free markets while trying to replicate the same modus operandi of the illiberal Left.

These new right-wingers have little faith in individuals and their families, but plenty of confidence in the government apparatus. We do not need governments to intervene and assess which rights are worth fighting for. Our rights do not come from the government. In a patriotic country with a free market system, individuals have the opportunity and the means to fight for what they believe in — against government and big businesses.

Free market capitalism and conservatism are the only belief systems compatible with one another because at their core they are in line with human nature.

Individuals are born with a natural love for their families and communities. They need the tools and opportunities to protect and strengthen them. Free and fair markets can provide these tools. In this respect, free markets are not a cult. They are merely the instruments that enable achieving the goals and aspirations of everyone and protecting the rights that every individual is born with.

In a free-market economy, those who work hard or are talented succeed, regardless of their background, and obtain the means to help the less fortunate. More importantly, a capitalist system provides the necessary incentives for everyone to study, work hard, and be rewarded. The greater the economic liberty and the more restricted the government’s influence is, the greater the means for all individuals to care for their families and strengthen them. Capitalism is not heartless — it is the opposite of that. It channels self-interest into altruism, but only if the cronyism that comes from government intervention is substantially minimized and the individual and the family stand at its center. This is what lies at the heart of the fusionist proposal.

Government is merely a monopoly and, as such, it has the propensity to abuse its power. We cannot be against monopolies or big businesses in the private sector and still advocate for a bigger and all-powerful government in the hopes that it will be benevolent enough to help us. History shows that no matter how well-intentioned bureaucrats and politicians may be, their propensity for wrongful thinking and dangerous action is great. The United States is $30 trillion in debt due to reckless and inefficient spending. The European Union is on a path toward zombification because of unproductive fiscal policies, economic centralization, an endless quantitative easing program, and overtaxation. Poverty and inequality are not caused by free markets but rather by constant government intervention. Governments intervene and allocate capital to their cronies and zombie companies.

In crony capitalism, the result is rather akin to the one in communism, socialism, and fascism, where a government monopoly takes away the economic freedom of the many to benefit itself and its cronies. This destroys incentives and attacks hard work, meritocracy, and equality of opportunity, while helping the rich get richer and the poor get poorer. Why should we condemn interventionism when a left-wing autocrat does it and applaud it when it is carried out by a right-wing leader? Principles should not change based on which leader holds power. Moreover, the illiberal Left is not defeated by using the same dirty tactics but by providing an opposite, inspiring, hopeful, and working alternative with courageous individuals who do not back down from a fight or their principles.

Free markets are not an abstract entity. They are a multitude of individuals interacting with one another and making decisions in a trial-and-error process. That is why the market can correct itself. This makes the market the most democratic institution there is. It should not be the only institution, yet it remains a vital one. Every innovation and increase in the standard of living is due to the freedom and opportunities of individuals to demonstrate and use the very best they have.

That is why we should have higher faith in the individual, his or her love for family, community, tradition, and history, and should reject a nanny state of unelected bureaucrats who cannot know the needs and wants of citizens.

Successive governments have put Western society in a loop of never-ending crises, which are continuously generated — each time bigger and worse than before — through the same policies that are presented as their cure. Yet, as individual liberties, economic opportunities, and standards of living are reduced, dependence on government is heightened — effectively putting the West on a socialistic path. This not only has economic implications, but cultural, national security, and geopolitical ones as well — and we are seeing that now with the Russian invasion of Ukraine.

As Margaret Thatcher would put it, communism is the regime for the privileged elite and capitalism is the creed for the common man. Rejecting any form of statism with determination and embracing and perfecting free markets and patriotism is the only way to restore sanity and prosperity to the West.

Nikola Kedhi is a Senior Financial Advisor at Deloitte, one of the Big 4 consultancy firms, and a contributor to several media outlets in the U.S. and Europe, including Fox News, Newsmax, the European Conservative, the American Conservative, the Federalist, CapX, the Mises Institute, Il Giornale, and many others. His articles reflect solely his own views.