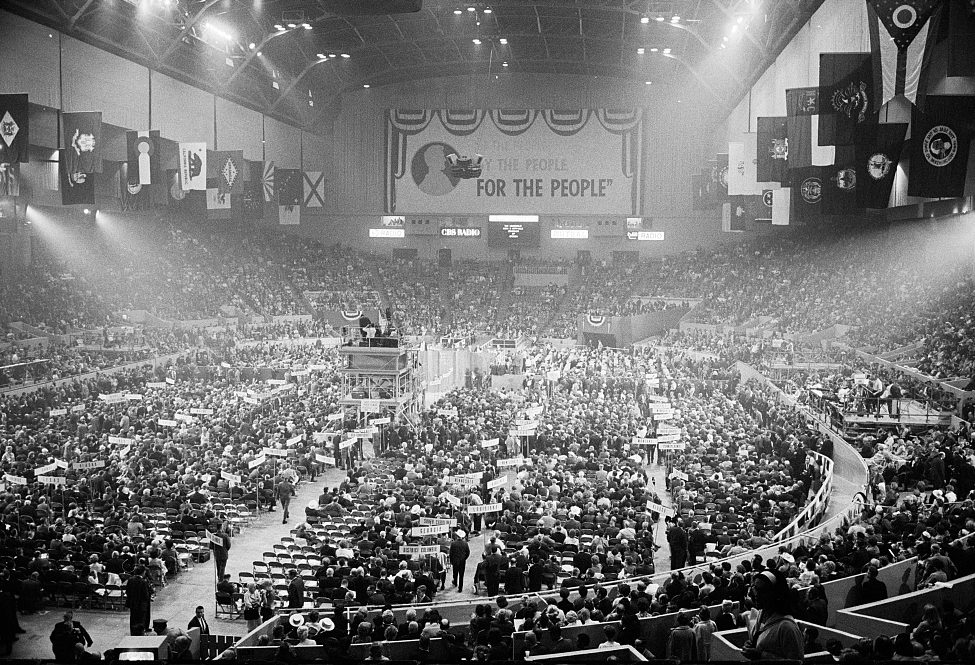 In the summer of 1960, I was demonstrating outside the Republican National Convention at the Chicago Stockyards. My homemade placard read, “Out the Door With Eleanor,” a tribute to the wife of the late President Franklin D. Roosevelt. Eleanor was an itinerant leftist termagant in those days, and she was not beloved among conservatives of that era. Or of any other era, for that matter.

So there I was, cheering for Barry on the streets on Chicago’s South Side, when a guy from my Indiana high school hailed me. His father was a national committeeman — from Kansas, I believe — and he had an extra pass to the convention floor. Would I like to use it?

Well, use it I did. I handed my sign to my sister and went in the first door I saw, a service entrance, and wandered into what looked like a cavernous storeroom. I turned out to be just outside the entrance to the main floor, I saw a group of attractive young women, dressed up in matching black cocktail dresses, lined up four abreast like a high-school pom-pom troupe. This was the old days, when real bands played and real balloons festooned the hall’s ceiling. Sure enough, the gals were part of the “demonstration” that would spontaneously erupt the moment Nixon’s nomination was put forward later that evening.

They were all wearing white sashes emblazoned with “Nixon” in blue.

Nixon? No way. I had to do something.

So I went up to one of them, a cute blonde twenty-something. “You can’t be for Nixon,” I cried. “He doesn’t stand for anything!” I was pleading in my most mature possible 13-year-old voice.

The gal smiled and turned over the right shoulder-strap of her dress to show me the campaign button hidden there.

“Kennedy for President,” it read.

For the past 60 years, the voice of this accidental oracle has hovered close by. In my book of American politics, her line is Genesis 1, verse 1. Her unvarnished wisdom penetrates every page.

Where It All Started

In 2014, the Heritage Foundation hosted a celebration of the 50th anniversary of the Goldwater campaign of 1964. After the event, Barry Goldwater Jr. came over to say hello. “I just want you to know,” he said, “that if it hadn’t been for your father, my dad would never have run for president.”

Here’s what he was talking about.

In the winter of 1960, my father, Clarence Manion, was preparing to publish Conscience of a Conservative. Why was our family proofreading the galleys on our kitchen table? Because no major publisher was interested in “conservatism,” and they’d never heard of Barry Goldwater. So Dad decided to publish it himself.

Dad had taught Constitutional Law at Notre Dame for 30 years. A Catholic and a lifelong Democrat, he had written a best-selling book, The Key to Peace, a study of the indelible religious character of the American Founding. He supported Robert Taft for the Republican nomination in 1952, worked for — and then broke with — Eisenhower in 1953, and started the Manion Forum in 1954. This weekly program was carried on hundreds of radio stations in its prime. In her history of conservative media, University of Virginia professor Nicole Hemmer calls the Forum “the nation’s premier conservative radio program in the 1950s and 1960s…. Manion was in many ways the godfather of modern conservative media,” she writes.

The Manion Forum was also the true north for conservatives looking for a nationwide audience. One of them was Arizona Sen. Barry Goldwater.

Dad was a popular speaker, appearing often in venues across the country. After an appearance in Phoenix in early 1957, reporters asked him, “You don’t like Ike, you don’t like Nixon, you don’t seem to like anybody. Who do you think would be a good conservative president?”

He shocked them: “You’ve got a terrific senator right here in Arizona,” he said.

On May 12 of that year, Barry Goldwater made his first appearance on the Manion Forum.

After that, Dad was Goldwater’s strongest supporter, and he worked hard at it. By 1959, with Goldwater’s carefully crafted consent, Dad was putting together the “Committee of 100” — independent of Goldwater but indicative of the serious support for the senator among prominent conservatives.

Dad arranged for L. Brent Bozell, a Senior Editor at National Review, to work with Goldwater on a manuscript. On August 31, 1959, the Victor Publishing Company sent Goldwater a check for $1,000 — his first advance on the book’s royalties.

Why the Victor Publishing Company? Why not a major New York publisher? The answer is simple. Nobody important was interested in a book from an unknown junior senator from an insignificant state. So Dad started his own publishing firm to publish what became Conscience of a Conservative.

Dad conceived the book, he published it, and he even gave it its name. As Professor Hemmer puts it, Conscience “came together through Manion’s single-minded determination.”

The book’s title certainly has a nice ring to it. Where did he come up with the name? I never heard him say, but not long ago I found a hint, right in my own library.

Dad’s collection of “Great Orators” fills the better part of a shelf. Alongside those is his copy of a book published in 1924 by Nicholas Murray Butler, longtime president of Columbia University.

It’s called The Faith of a Liberal.

Butler was a celebrated philosopher, educator, and philanthropist. But he was also a realist, and he knew that patriotism was hard work. “If we can instill into the hearts of our fellow Americans … faith in America, you have the answer to the propaganda of distrust… carefully propagated distrust of American principles, American laws, and American ideals.”

Butler considered the power-hungry legislatures and fledgling bureaucracies of his day to be a danger to those ideals. He targets them in a passage that Dad highlighted: “Their constant appeal is to force, to what has come to be called the police power of the state, and they exercise it with a ruthlessness and a ferocity.”

Some things never change. American ideals versus a power-hungry government. At first glance, it appears that the faith of a liberal in 1924 resonated well with the conscience of a conservative 35 years later. Goldwater’s title was a natural.

Opportunists, The Sewer, and the Hot Tub

A lot has changed since 1960. When Goldwater wrote, Americans crowded the streets every Fourth of July, lustily joined in the National Anthem at public events, and crowded the pews in churches across the country. In fact, belief in God and Country was so thoroughly engrained in our culture that Goldwater’s classic didn’t need to address faith at all. Instead, he wrote to warn Americans of the dangers of government trespassing on our freedoms, including our freedom of religion.

The second chapter of Conscience is called “The Perils Of Power.” Those perils are real, on planes both personal and political. Looking back on the past 60 years, experience has taught us that “conservatives” are just as susceptible as the Left when it comes to the temptation of the libido dominandi, Augustine’s term for the love of power for its own sake.

In 1980, M. Stanton Evans, a brilliant conservative writer in his own right, played the oracle himself when he warned that “conservatives coming to Washington know that it’s a sewer; the problem is, most of them wind up treating it like a hot tub.” He was right 40 years ago, and he is right today.

Sixty years later, does conservatism still have a conscience? Undoubtedly many conservatives do, and they want to put their principles into action. But beware: the sewer and the hot tub are still alive and well.

Christopher Manion writes on politics for Catholic and Evangelical publications.