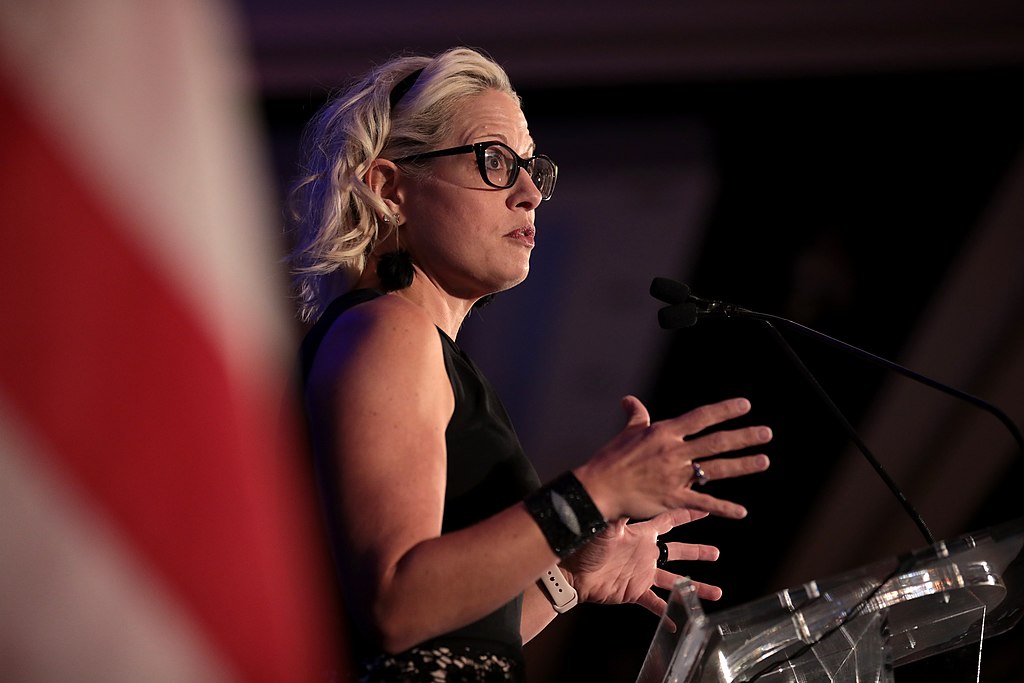 During a week when the New York Times op-ed page asked “Is It Time for Kyrsten Sinema to Leave the Democratic Party?,” the Arizona senator left the country instead.

Sinema traveled to London and Paris, where Democrats held fundraisers milking the cash cows living in the geographic base of their party. One imagines that the activists who followed her into the bathroom and to Boston to protest her at a marathon that she ultimately decided to watch rather than run did not make it all the way across the Atlantic to pester their surprise nemesis.

Pick your bad metaphor: Sinema in exile, the woman without a country, down and out in Paris and London. The senator looks far from home.

Her opposition to the $3.5 trillion manifestation of the Build Back Better Act, particularly after entering politics as a radical running a group depicting U.S. soldiers and sailors as evil skeletons and likening the wars they fought to combat terrorism to terrorism. That grim, ideological Citizen Sinema seems a different person than the saucy Senator Sinema who offered a meme-able moment thumbs down to a proposed hike in the minimum wage.

The American Spectator talked to one from Sinema’s home to make sense of the senator.

“Let’s give it time,” Arizona Governor Doug Ducey says of Sinema’s present opposition to the Build Back Better Act. “They are in the middle of negotiation. She’ll show everybody who she is soon enough.”

Did Ducey play his hand in saying that Sinema soon shows hers?

Perhaps Ducey’s cynical take stems from seeing Sinema as a future rival just as Sinema’s sudden centrism stems from her seeing the governor of her state as a potential rival. Ducey, term-limited from running for re-election next year, told The American Spectator that in politics he merely desired the job he occupies. Sinema faces reelection in 2024 but in calling teaching her calling and favorite job she sparks thoughts that maybe she does not even seek a second term. Her Senate term’s conclusion marks 20 years in politics, a long time perhaps made longer by the partisanship and now the internecine sniping.

Her polling “soars” or should “terrify” her depending upon the source. Reading the polls, like reading the politician, remains a bewildering experience.

Ducey remains cagey about his political future. And Sinema, who speaks loudly with symbolism, does not seem to say much with words. Her open bisexuality and taking her oath of office with hand on the U.S. and Arizona constitutions rather than the Bible led to widespread assumptions about her vote in the Senate that turned out, like so many assumptions, wrong.

“I think what’s being proposed by the Democrat majority in Congress is just a bad idea,” Ducey explained to The American Spectator. “This is a just leap into big-government socialism and it will really hurt our competitiveness and free-market capitalism that remains in our country.”

While reports of behind-the-scenes discussions claim that Sinema opposes the tax increases in the bill, feels betrayed by an infrastructure vote made conditional upon the passage of the more expensive bill, and wants $100 billion cut from climate spending, her office denies the latter and she does not say much publicly about the former. We know she is a no. We don’t know why she is a no or whether she remains a no. The Democrats and Republicans who cast her as a gimme vote for her party Mickey-Rooney-playing-Rhett-Butler miscast her. She fits the role of maverick better another famous Arizonan who heard the flattering descriptive more loudly and frequently the more he conformed to the desires of those in the cheap seats on press row. But that name does not come up among the ones Democrats currently call her.

Confusion over Sinema seems like the closest thing in Washington to bipartisan consensus.

“I think she’s going to play this to what she sees as her maximum advantage,” Ducey concludes of her standoff with fellow Democrats. And whether she does so while wearing thigh-high boots or a purple wig, one imagines she does so in style.