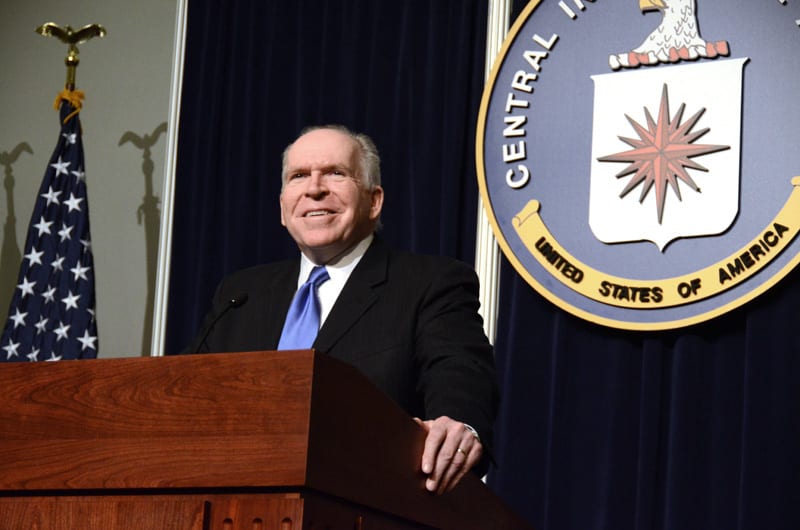 Even as Jim Comey and John Brennan lecture the American people on what is “normal,” they adopt an astonishingly abnormal role for former heads of the CIA and FBI — the role of coup leaders whose partisanship grows more reckless by the day.

“This is not a tin-pot dictatorship,” says Comey. But aren’t Brennan and Comey acting like officials of a displaced one? They are trying to claw back to power by spreading unverified charges against a duly elected president. Brennan says without evidence that the Russians have “something” on Trump. Comey says without evidence that it is “possible” Trump paid prostitutes in Moscow to urinate on each other. Here we have the two former guardians of the nation’s secrets showing less restraint than gossip columnists at TMZ.

Comey compares a president who gained power lawfully to a “mobster,” while he casts his own illicit power grabs as “ethical.” It is Comey and Brennan who are behaving like deep state thugs, staging a coup through cronies in the press to whom they had been criminally leaking before Trump’s victory. Thanks to that cozy relationship, Comey and Brennan can spread their smears far and wide.

It turns out that Mueller hasn’t even interviewed Brennan, the original spinner of the Trump-Russia fable. That’s all you need to know about the bogusness of Mueller’s investigation. It was never about Russia but simply a pretext to impeach a president the ruling class despised. If Brennan had any real information on collusion between the Trump campaign and Russia, Mueller would have certainly spoken to him by now. The fact that he hasn’t is confirmation that the genesis of the counterintelligence probe into the Trump campaign was a sham.

But that, of course, doesn’t stop Brennan from continuing to stoke it. In his interview with Chuck Todd, he entertained the unverified claim that Trump’s lawyer went to Prague for a nefarious meeting with the Russians. Brennan said the charge is “devastating,” if true, while providing zero evidence for it. Naturally, Todd, a former Democratic staffer, aided the smear by saying that the charge, along with the others in the Hillary-purchased Steele dossier, merit discussion since they haven’t been “disproven” yet.

What an insanely unfair standard of evidence. Americans should tremble at this spectacle. If even a president isn’t safe from such smears, peddled by former heads of the CIA and FBI, who is? How many people did Comey prosecute on similarly flaky grounds? How many “intelligence assessments” did Brennan issue on nothing more than his own hunches?

It is hard to imagine a worse advertisement for the CIA and FBI than Brennan and Comey. Whatever aura of apolitical credibility those agencies once enjoyed these two partisan hacks have shattered. Brennan told Todd that members of the intelligence community are privately cheering him on in his coup attempt. His “former colleagues,” he said, say, “Thank you, John.” Wow, how reassuring.

Comey’s coup attempt, meanwhile, is backed by his wife and daughters, who proudly identify as Hillary supporters and anti-Trump activists. In his drippy way, Comey was almost saying to George Stephanopoulos: hey, my family put me up to it. In one of ABC’s promo shots, Comey and his wife are sitting next to each other, poring over the New York Timeslike two very concerned liberals.

Comey gave himself away in the ABC interview by anchoring his “moral” case against Trump on smug liberal grounds — that Trump’s comments “in Charlottesville” make him “unfit” to be president and so forth. The interview was only notable for the exposure of Comey’s entitled liberalism, punctuated by his admission that he didn’t even inform Trump about the partisan origins of the Steele dossier. That wasn’t part of his “goal,” he said.

A leaker, liar, and subversive, Comey is now off to teach “ethical leadership” at William and Mary (his alma mater, for whose basketball team he once falsely claimed to play, according to the book’s review in the Washington Post), while Brennan, who urges members of the federal government to disobey the chief executive, keeps an eye on Trump’s “moral turpitude.”

Their delusions of grandeur show no signs of dissipating. Brennan, who supported the Soviet-controlled American Communist Party in the 1970s, has even taken to speaking up for the “deceived,” as if he is the voice of an oppressed and unenlightened proletariat. Comey is operating off a similar conceit, seeing himself as a figure simply too singular to be fired. For some reason, Comey thought it sympathy-inducing to tell Stephanopoulos that he drank wine from a “paper cup” on the flight back after his sacking — an image of Comey not as a moral giant but a pathetic partisan drunk on his own rectitude.