Liberals are gleefully parading around what purports to be an e-mail from former Secretary of State Colin Powell to then-Secretary of State Hillary Clinton. (At least we think this was sent while she was in office, or else very shortly before taking office.) In it, Powell basically cops to violation of both government policy and perhaps the same law regarding the handling of confidential information that we know Hillary has violated.

The main thing to remember is that Powell was not Clinton’s boss, professor, mentor, or instruction-giver, and that his intentional misbehavior does not give sanction to hers. It simply cannot be used (credibly) to defend Mrs. Clinton. To use a bad analogy, this is the high-ranking gov’t official version of “If your brother said to jump off a bridge, would you do it?”

Also, Powell did not set up a private server the way Clinton did.  However, I have to say that his implication in this note is that he intentionally aimed to prevent his own communications from becoming “official record and subject to the law” even though that is the default (and really only) standard for e-mails to or from the secretary of state that have even marginal connection to his/her work as a government official. To me, Powell’s note is tantamount to admission of a crime and Hillary’s reaction was that she thought that particular crime seemed like a fine idea. 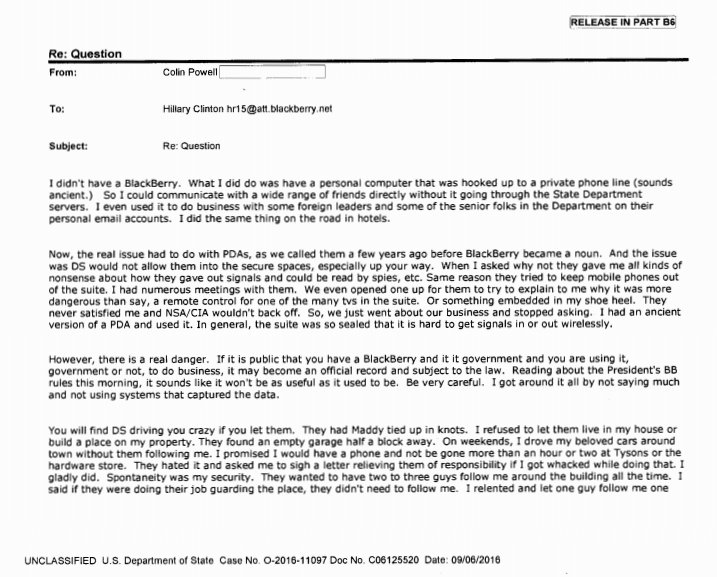 Powell letter to Clinton about use of private e-mail