According to the Energy Information Administration, which tracks energy use in production on a monthly basis, the single largest source of electric power for the first half of 2017 was… coal. See chart. 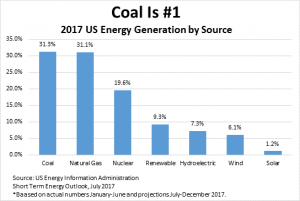 That’s an amazing finding because liberals and especially environmental groups keep telling us that coal is a dead industry. They have ridiculed Donald Trump, and called him a liar, when he has said that he will revive the coal industry and the related jobs. “The Coal Industry Isn’t Coming Back,” a New York Times piece assured us a few weeks after the election. “Saving coal is one promise he (Trump) won’t be able to keep,” the author predicted. The Financial Times was even more blunt in its headline last month: “Coal is dead; long live the sun.”

Let’s see if the left issues a retraction. Don’t hold your breath.

According to the EIA’s July report, “EIA estimates that the share of total U.S. generation fueled by natural gas during the first half of this year averaged 29%… In contrast, coal’s share of generation rose from 28% in the first half of 2016 to 30% in first half of 2017.” For the full year 2017, EIA estimates that coal will generate 3.453 million kilowatts per day, while natural gas, because of a rise in its retail price this year, will generate a hair less, or 3.432 million kilowatts. Wind and solar remain niche sources of energy providing about one-seventh as much power as coal and gas.

That’s not all. On July 21, the Department of Commerce’s Bureau of Economic Analysis reported that “mining increased 21.6 percent.… The first quarter growth primarily reflected increases in oil and gas extraction, as well as support activities for mining. This was the largest increase since the fourth quarter of 2014.” ‎No other major American industry had such gains and across all industries output was up less than 2%.

As for the drilling and mining industries, they have gained more than 50,000 jobs since Trump’s election with 8,000 added in June alone. Many of these were in the oil and gas industry, but some were in coal, whose output has increased 12% this year.

Liberals complain that coal activity isn’t a major producer of jobs because the industry is producing a lot more coal with a lot fewer workers. That is absolutely true. Ladies and gentlemen, that is called productivity. A new study by the Institute for Energy Research points out that it takes wind and solar at least 30 times more man hours to produce a kilowatt of electricity than are required to produce that same energy from coal or oil. If you don’t think this productivity advantage of fossil fuels is a good thing, then you probably think we should bring farm jobs back by abolishing tractors and modern farm equipment.

We are not the only country that is using a lot more coal. Of all places, the New York Times reports that “Chinese companies are building or planning to build more than 700 new coal plants at home and around the world, some in countries that burn little or no coal.…” India is building hundreds more.

Does any of this sound like the last gasps of an industry that is “dead”? The reason these nations are turning to coal and natural gas is very simple: price and reliability. On both measures, fossil fuels are much more efficient than wind and solar generation. Here and abroad solar and wind only survive due to massive government subsidies that mask the real cost. For all the talk of the “booming” solar energy field, it accounts for one percent of American power production.

Amazing that even with the tens of billions of dollars of subsidies to tilt the playing field away from fossil fuels and regulations meant to kill them, these fuels are still flourishing as never before.

Stephen Moore is a senior fellow at the Heritage Foundation and an economic consultant at Freedom Works. His latest book is Fueling Freedom: Exposing the Mad War Against Energy (Regnery, 2016).