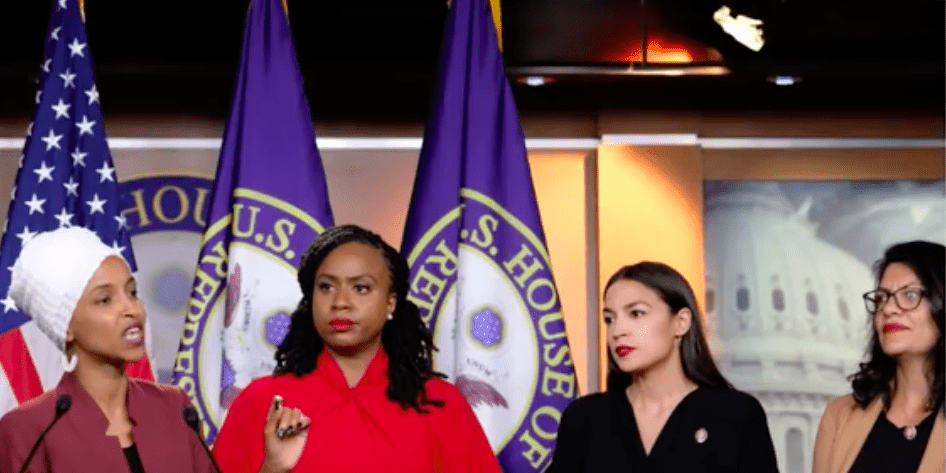 In the middle of a series of flat-out racist statements by “The Squad” — four freshman progressives who spew racist and anti-Semitic sentiments faster than Speaker Nancy Pelosi can keep up — CNN, MSNBC, and the Washington Post joined the lynch mob that has emerged from the Democratic Party’s horrendous and lengthy racist history to yet again divide Americans by race.

Over here at The Hill is this headline:

The piece begins by saying,

CNN and MSNBC have said the word “racist” more than 1,100 times since Sunday, according to a tally conducted by Grabien Media, an online media production and news prep service.

The count, which doesn’t include on-screen graphics commonly known as chyrons, comes two days after President Trump in a Sunday tweet said four Democratic congresswomen — all U.S. citizens and members of minority groups — should “go back” to their home countries.

Apparently, a wave of racism has so overwhelmed both networks, not to mention the Washington Post, that they feel compelled to project the Squad’s vivid racism onto the president. A wild and deliberate misrepresentation.

It is startling to see mainstream media outlets stand up for those who spew blatant racism. But perhaps not surprising.

Let’s be blunt. The Squad of the four progressive Democrats is composed to a person of thoroughgoing, straight-up racists. Anti-Semites. In exactly the cultural and political traditions of their 219-year-old political party, they demand to be judged — and to judge others — by skin color. The party that wrote six platforms supporting slavery and another 20 supporting segregation or being silent on the subject has now moved on to the son of segregation: the straight-up racism of identity politics. The Squad members are the infamous racist Democrats from the 1960s reborn. The values of segregationists George Wallace and Bull Connor, the then-governor of Alabama and Birmingham police commissioner, respectively, live again with the new re-segregationists, Congresswomen Alexandria Ocasio-Cortez, Ilhan Omar, Rashida Tlaib, and Ayanna Pressley.

Yet CNN, MSNBC, and the Post are standing up for this garbage. Over at CNN the four are identified right off the bat in this story not as members of Congress, a term that has no racial connotation, but rather as “the four progressive women of color” — an openly racist term that focuses on skin color. Indeed, in one chyron after another CNN was openly disparaging of the late Dr. Martin Luther King’s wisdom that Americans should “not be judged by the color of their skin, but by the content of their character” as the network stood up for the four congresswomen and completely misrepresented the president’s very findable, decidedly non-racial tweets. Amusingly, Mediaite reports on CNN’s gathering a panel of Republican women who doubtless dumbfounded the network by pointing out the easily observable truth that it is the Squad members, not Trump, who are racist.

As a reminder, Trump’s now-famous tweet never mentioned race — at all. The two central tweets said:

So interesting to see “Progressive” Democrat Congresswomen, who originally came from countries whose governments are a complete and total catastrophe, the worst, most corrupt and inept anywhere in the world (if they even have a functioning government at all), now loudly………

.…and viciously telling the people of the United States, the greatest and most powerful Nation on earth, how our government is to be run. Why don’t they go back and help fix the totally broken and crime infested places from which they came. Then come back and show us how….

The “love it or leave it” sentiment in Trump’s tweets is not only not racist, it is also old. Here is a New York Times story from May 9, 1970 — 49 years ago! — about a group of construction workers breaking up a “student anti-war demonstration” on Wall Street in Manhattan. The protesters were white, left-wing college kids who opposed the Vietnam War. The “hard hats” were white union members. As the incident proceeded, the Times reported that the hard hats were shouting “All the way, U.S.A.” and “Love it or leave it.” Which is exactly the sentiment Trump was expressing in his tweets. Then, as now, race had zero to do with the 1970 incident. In fact, “Love it or leave it” was a popular bumper sticker back in the day, pasted on the cars of Nixon supporters and those who supported the Vietnam War.

The real problem here is that the American Left is racist — and always has been. Now, appallingly, the “mainstream” liberal media — or, as I call it, the Leftist State Media — has come out openly to defend the racist, anti-Semitic Squad. The Washington Post has been publishing one editorial and column after another that sound as if they were written by a Klansman, repeatedly labeling these members of Congress by race.

On CNN, Trump supporter Steve Cortes went at it with New York Times columnist Wajahat Ali, with Ali openly displaying the same kind of racism as the Squad members. In this case he was going after Cortes’ Latino heritage, to which Cortes sharply and correctly responded: “To call me, to call tens of millions of Trump supporters racist, to dismiss us, to dehumanize us, and marginalize us, that’s bigotry!”

Indeed it is. But Ali, as with the Squad members, cannot seem to help himself, because blatant racism is in fact the long, long cultural heritage of the Left and the Democrats.

Now the media, following the lead of far left-wing groups like the racist, anti-Semitic Media Matters, has jumped into this cesspool.

Not good. In fact, it’s disgusting.