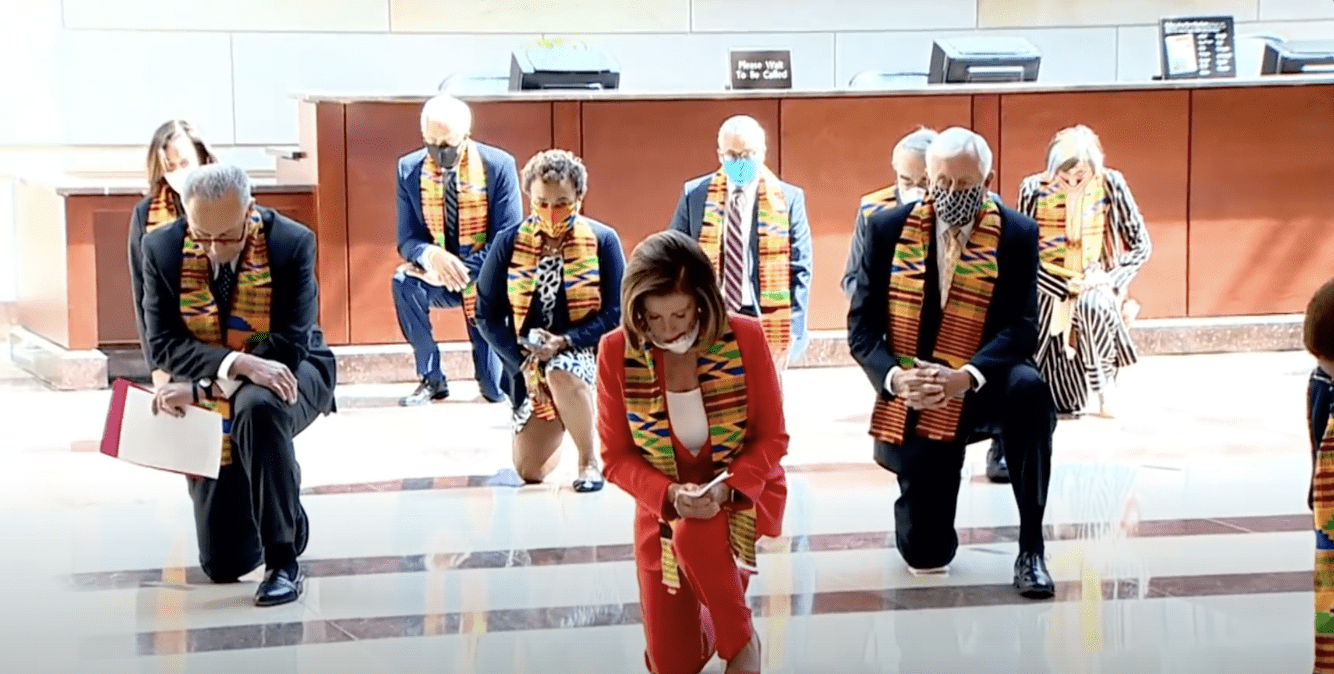 Tuesday at USA Today there was a fascinating “fact check” article covering that idiotic spectacle put on by Nancy Pelosi, Chuck Schumer, and several other congressional Democrats last week in which they donned African kente cloth scarves and knelt on the floor of Emancipation Hall for some eight minutes and change in some sort of morbid tribute to George Floyd.

In the days since, social media users have pointed out the cloth’s historical ties to the slave trade in order to criticize the legislators’ garment choice.

“Yesterday the Democrats wore kente scarfs and knelt down for their photo op. So check this out, Kente cloth was worn by the Ashanti. It’s made of silk so the affluent wore it. The Ashanti were also known as slave owners and traders. Huh?” Dave Brandon posted on Facebook June 9. “This makes me wonder why they chose to wear this particular tribe’s garb.”

In the Facebook post, Brandon acknowledges kente cloth’s historical ties to the slave trade; however, he ignores the broader cultural significance the cloth has to West African and African American culture.

Brandon has not responded to USA TODAY’s request for comment.

The USA Today piece then conducts a somewhat lengthy historical examination of the Asante empire of West Africa, which served as the primary sales agent for the trans-Atlantic slave trade in the 17th and 18th centuries.

The long and short of that examination held that yes, the Asante were slave traders, and yes, kente cloth without a doubt has its origins in the Asante empire.

Except no, wearing kente cloth isn’t about the slave trade:

Cultural Specialist and Senior Curator at the Smithsonian Center for Folklife and Cultural Heritage Diana Baird N’Diyea spoke to USA TODAY about the broader historical context and cultural significance of kente cloth.

N’Diyea, who did field research with the Maroon people in Suriname, agreed formerly enslaved people that were likely Asante used kente’s technique and aesthetic to create Pangi.

“It’s complicated because there’s a lot of evidence that people from all social groups and classes were enslaved,” N’diyea told USA TODAY.

N’Diyea stressed that the “tangential” question behind Brandon’s post was “Who owns kente?” She asked whether it was the African world, the government of Ghana, the Asante people, Asante royalty or the weaver.

“My way of thinking about it is that it honors the creativity, the ingenuity, the skill of the people who actually make the kente,” she said.

So despite the connection of kente cloth to slave traders, what wearing kente cloth really means is you’re supporting somebody who sewed it?

Tell that to Oklahoma State University football coach Mike Gundy, who was forced to humiliate himself and grovel for the sin of wearing a t-shirt with the One America News Network name printed on it after his star running back Chuba Hubbard, who is from Canada by the way, publicly chastised the t-shirt as unacceptable and declared he wouldn’t play for a coach who watches news channels Hubbard doesn’t like.

Gundy should have consulted with Diana Baird N’Diyea before abasing himself. What he could have said was he was honoring the Guatemalans or Filipinos who stitched the shirt, and not the news anchors at OAN.

N’Diyea rejected the idea kente signifies slave traders and stressed how it’s become a symbol of pride for African Americans over the last 50 years.

“When Africans were kidnapped and brought to this country, they were told they didn’t have a history, they didn’t have a tradition,” N’Diyea said. “During the 1970s through at least the early 2000s kente cloth [became] regarded as a symbol of pride in African American identity and heritage.”

Rep. Karen Bass, chairwoman of the Congressional Black Caucus, defended the legislators’ use of kente cloth after the June 8 event.

There are people who think Karen Bass might be Joe Biden’s running mate this fall. If that’s the case, let’s hope she’s made to fully explain her comment.

Because if kente cloth signifies African heritage, and that heritage includes the trading of fellow Africans into slavery — particularly when this particular signifier of African heritage comes from a historical entity that was directly involved in and profited from the slave trade — why isn’t kente cloth an endorsement of African slavery? And why isn’t Karen Bass excoriated as a defender of the slave trade?

Is what she’s saying that it’s OK for Africans to trade other Africans into slavery but it’s a bad thing for non-Africans to do it?

It seems pretty inescapable that this is exactly what she’s saying. And by extension this entire ridiculous moment rides on this very point.

Because all over the country people who share the same ideological fetishes as Karen Bass, Nancy Pelosi, Chuck Schumer, and Joe Biden have been demanding the destruction of historical landmarks, monuments, and objects of public art on the basis that the figures depicted therein either owned slaves, traded slaves, facilitated slavery, or otherwise committed words or deeds mean or unfavorable to People of Color.

And yet when the entire Democrat Party, after denouncing President Trump’s “photo op” holding the Bible in front of a church that had just been burned by leftist rioters, engages in one of the most brazen publicity stunts in American history decked out in a garment directly traced to a kingdom noted for doing brisk business in the trafficking of human misery, that is unobjectionable.

It’s unobjectionable because the slave-trading empire also did other things.

Tell you what, Karen, and Nancy, and Chuck. You keep your lousy African slave trade cloth, and I’ll keep my American heritage. We can all be happy with our flawed existence and history as human beings. Slavery is not the reason Columbus, Lee, Washington, Jefferson, or even Jefferson Davis had monuments made and dedicated to them. It was other things they did — things that were a whole hell of a lot more significant than the certainly laudable non-slave-trading accomplishments of the Asante kings, whatever those might have been.

And Karen, Nancy, and Chuck, while you’re at it, tell your goons in the streets to put a cork in their “mostly peaceful” riots, pull back on the reins of their bloodthirsty Twitter mobs, and go back to their menial jobs so that we can preserve what’s left of America.

Because it’s either that or we’ll apply your standard and your rules to your behavior. And guess what, guys? You can’t meet that standard. And maybe our side will begin learning and employing your tactics in order to impose it on you.