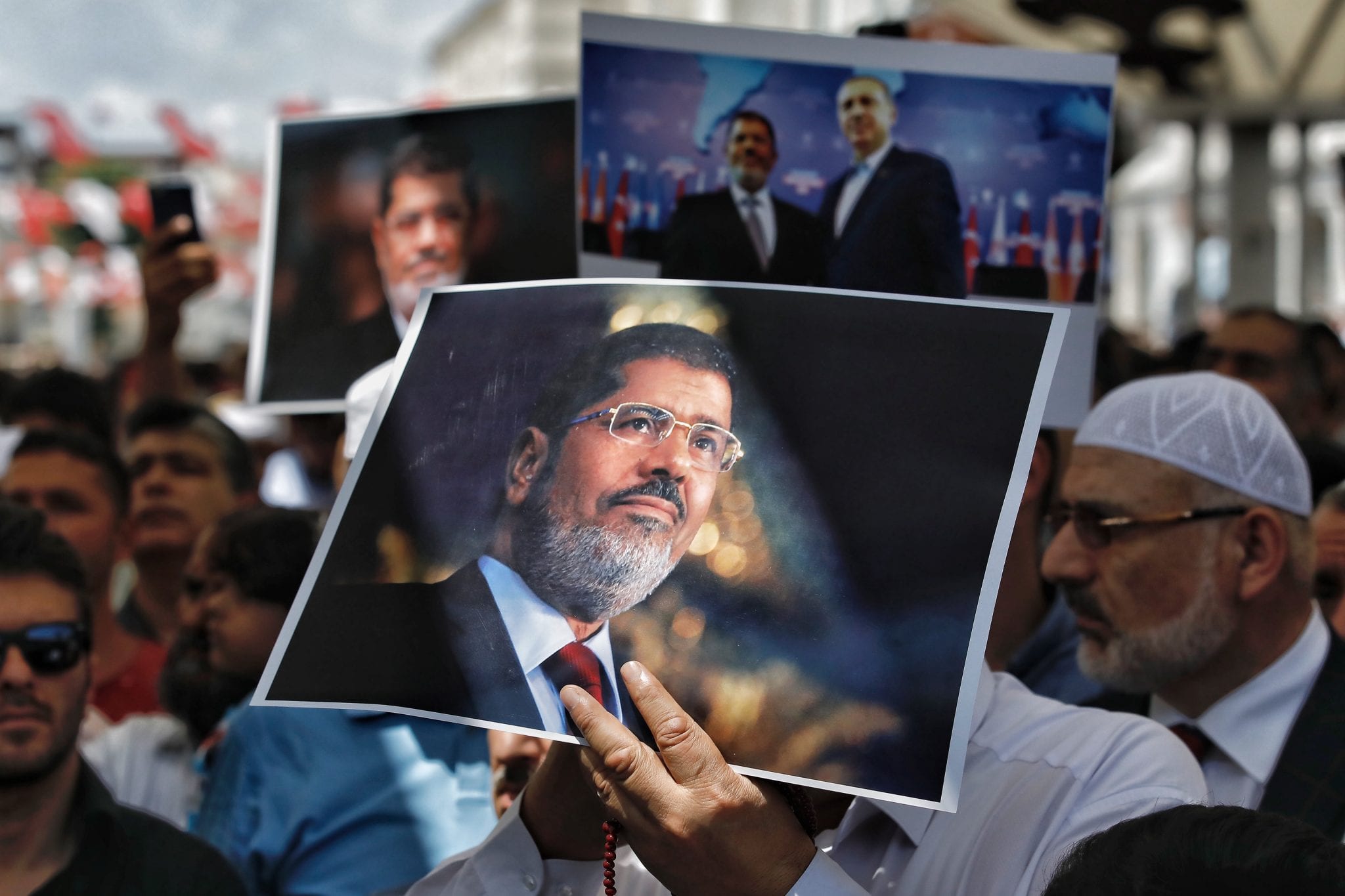 Speakers at a recent memorial service held in a southern suburb of Chicago for the late deposed president of Egypt, Mohamed Morsi, called his removal from power in 2013 a Western and Arab conspiracy to throttle democracy and oppose the establishment of Islamism in the Islamic world.

In a video that the mosque published on its official Facebook page, Palestinian activists used the occasion to call for Israel’s destruction, saying that repressive Arab regimes could only fall by destroying Israel first and calling Israel “the head of the snake.”

The memorial service was held in Arabic at the Al Nahda Center in Worth, Illinois (25 miles southwest of Chicago), on June 22, five days after Morsi’s death.

Al Nahda (Arabic for revival) was founded around three years ago by Ghassan Ballut. Ballut, who remains the current Center president, was arrested and accused in 2003 for allegedly helping to lead Palestinian Islamic Jihad’s U.S. operations and assisting its members in entering the country. Ballut was eventually acquitted at trial, although the U.S. government stood by its evidence. Ballut’s co-defendant, South Florida professor Sami Al-Arian, pled guilty on one count of conspiring to provide services to the terror group and was eventually deported.

Ballut said at the memorial service that the issue is bigger than the person of the late Morsi:

Egypt is at stake. The destiny of the [Islamic] nation hinges on Egypt, because it is one of the most important Arab and Islamic states. The West was able to drive a wedge [in the Middle East] by invading Iraq. Also the West tried to destroy Syria. Now the West is trying very hard [to do the same] in Egypt.  Morsi tried to revive Egypt, but it proved that the issue is bigger than him [Morsi].

The Palestinian activist opined that the failure in Egypt was not an excuse to give up: “We have to seize the opportunity and review our situation, because the Umma (the Islamic nation) is now going through labor.”

Ballut added that being in the U.S. gives Islamists the freedom to pursue opportunities that do not exist elsewhere:

In this free country, we can accomplish things that cannot be done somewhere else. I know that this is not easy, and the U.S. leaders may not give us enough wiggle room to act. But we learn lessons from the story of Pharaoh.  Eventually, those who oppose the revival of the Umma will fall down like Pharaoh did, or worse.

Ballut went on to blame Arab regimes for siding with Israel and the West and called for unity in opposition to Israel:

Those Arab regimes who bet on the West and Israel should know that they [the West and Israel] will not benefit them. Our will [to persevere] is more important than any weapon. Our priority is to work together until the corrupt [Arab regimes] fall. They will fall by hitting the head of the snake. The head of the snake is in Jerusalem. We have to unite together, whether we are Ikhwan [Muslim Brotherhood], Salafis, Sunnis, Shiites, Christians, and others. They want us to fight each other by disseminating divisions among us. The head of the snake in Tel Aviv and everywhere works in order to keep us backward.

Another Palestinian activist, Ali Sarhan, also spoke and expressed disappointment over the low turnout for the event despite Morsi’s support for “the Palestinian cause.”

Sarhan then quoted Morsi: “ ‘We will not leave Gaza standing alone.’ It is not merely an issue of Morsi, but a conspiracy against the Islamic nation … it is a conspiracy that prevents Muslims from voting in a president and their representatives. They want us subjugated in order to perpetuate the Sykes-Picot borders that divide us into nation states with different flags.”

Sarhan suggested that Egyptian President Abdel Fattah el-Sisi, who replaced Morsi in 2014 following the military-backed popular revolt against the Morsi government, was Jewish and was installed at the direction of Israel:

Who remembers [the late Israeli Prime Minister] Golda Meir’s dream? Golda Meir’s dream came true. She said that “We will plant one of us among them in order to rule them.” They installed one of them in the largest Arab state. It is a conspiracy against Morsi and the Palestinian cause. Morsi was the only one who stood with us and opened the Rafah border.

Mohamed Elimam, the Imam of the Chicago Islamic Center mosque, also spoke. Elimam eulogized Morsi from the Quran and Hadith and prayed for his soul before encouraging perseverance in what he described as the fight against Islam’s enemies. Emam is known for fiery Friday sermons against the West and Israel and has been caught on video at a Chicago mosque in 2014 extorting Palestinians to fight in jihad and to suffer martyrdom:

Know that “Paradise lies beneath the shade of the swords.” Paradise belongs to you, oh martyrs, oh fighters, oh mujahedeen, in our beloved Gaza and wounded Palestine. Stand fast in the face of this enemy.

Also speaking from the podium was Rafeeq Jaber, who said the liberal Palestinian Muslim leaders were deluded when they believed the West had a solution for the Palestinian cause. He added, “the Americans and the Zionists removed Morsi because they are afraid of Islam, because only Islam and Muslims like Morsi could free Palestine. Only Islam and Muslims like Morsi could prevent the West and Israel from taking control of the Arab and Muslim World.”

Jaber is perhaps best known for his role as a founder of the Council on American Islamic Relations (CAIR). Prior to helping to form CAIR, Jaber served as a leader of the Islamic Association for Palestine (IAP), an organization founded by the U.S. Muslim Brotherhood to support the Hamas terrorist organization, according to evidence submitted by the government during the Holy Land Foundation trial in 2007 and 2008.

Perhaps unsurprisingly given his background, Jaber took the opportunity of Morsi’s death to criticize the West’s opposition to Palestinian terrorist groups such as Hamas and Palestinian Islamic Jihad. Jaber said the real goal of the West in targeting terror groups is to prevent the imposition of Islamic law:

This is why they resisted Morsi, and resisted Hamas, and resisted [Islamic] Jihad, and they strongly resist anyone who declares that there is no god but Allah and wants Palestine and all of the Arab Nation under the rule of Allah be praised …We want to rule according to what Allah revealed [the Quran and the Hadith]. We want to be ruled by Islam. We want to be ruled according to Allah’s Sharia and the Sunna of the Messenger.

Also at Al Nahda Center, the day before the memorial service, a preacher took the opportunity of the regular Friday Khutbah (sermon) to eulogize Morsi, as well, according to another video on the center’s Facebook page.

The unidentified preacher, who does not appear on screen, can be heard telling the crowd in the mosque, “We do not grieve for Morsi because we agree on everything he did, but we do not want Egypt to get out of our control. The Jews are spreading rumors about the death of the Islamic nation (Umma). Israel wanted Iraq and Syria to collapse, and she had what she wanted.”

Al Nahda Center is providing a platform on the occasion of Morsi’s death for Islamist imams and activists to sow conspiracy theories and preach antisemitism and hatred against Israel and the West. Islamists are not only perpetuating the hatred and sense of victimhood that exists in Middle Eastern countries, but they are also transferring the maladies of that region to the West.